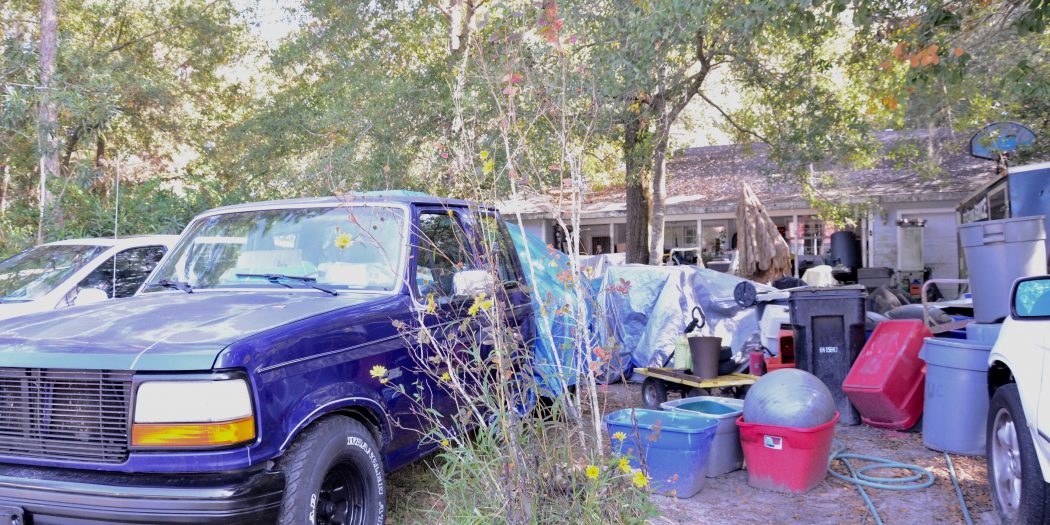 Gainesville Neighbors, City Enforcement Struggle To Get Man’s Cluttered Property Cleaned And Keep It That Way

Greg Cox recently built a tall wood fence outside his house in Gainesville, he says, because of another one on the same block that is owned by a man Cox and other neighbors call a hoarder.

“I put up the wall so I don’t have to look at it,” said Cox, 66, a salesman who lives with his wife and dog on Northwest 22nd Drive in the Edgewood community. “I just pretend it is not there.”

What other neighbors have described as an eyesore and junk yard is home to Doug Englert – and since 2006 they have complained about it to the city’s code enforcement division. They have three key concerns: mosquito infestation, potential fire hazard and property value depreciation.

The city has charged Englert $100 a day since June 2018 for not sufficiently cleaning it. He lives there and has another property in the city; they now have fines or liens on them totaling more than $500,000, said Peter Backhaus, head of the city’s code enforcement division.

Over the past decade, the division has opened more than a dozen code violation cases at the two properties. One of the latest was in October over inoperative vehicles. An inspection found one vehicle had an expired tag — and had not been moved for five years. It now has a current tag.

It’s an apparent strategy Englert uses to evade more complaints. According to Backhaus and his neighbors, for example, Englert typically cleans his front yard whenever he receives a violation notice, only for it to return to the same cluttered state within a few months.

Englert declined to speak with WUFT News about the matter when contacted by telephone recently. In November 2016, however, Englert told WUFT that cleaning his property was “at the top of his priority.” What has changed since then?

“Only that it’s gotten worse,” said Sherry Nobles, a neighbor. “Never has it been cleaned up.”

According to Nobles, there have only been more vehicles, plastic bins and tarps cluttered over Englert’s front yard over the past three years. When a WUFT reporter visited his house last week, four vehicles were parked on the grass and two were on the street just off his property.

“Nothing has changed in years, and I don’t see anything changing in the future, unless the city can force any form of clean up,” Nobles said.

State records show the property since 2010 has been owned by a limited liability company in Panama City Beach in Bay County. As a result, it is no longer protected by the Florida homestead exemption, and thus from possible foreclosure should a lien be placed on it.

Backhaus said the city has contacted the liability company about its concerns, to no avail.

“They said since Englert is the one living on the property, he’s responsible for what goes on there,” he said.

Another option: The city cleans the property itself – and then bills Englert for the cost.

Calling it “a rather isolated occurrence,” Shelby Taylor, the city’s communications director, told WUFT in an email that “the situation is on the radar,” and that Backhaus’ office and the city’s legal department are exploring how to go about enforcing liens on Englert’s property.

“That determination is yet to be made with no timeline of certainty,” Taylor said.

In 2016, Englert told WUFT his parents raised him to be conscious about not wasting things.

“That tends to make you hold on to things longer than a lot of people do,” he said then. “This society we live in today throws away a lot of things, and I’ve just never been that way.”

His neighbors said their patience and understanding have worn thin.

“No more empathy,” said Linda Bradley, 71, a former state employee. “I am embarrassed to have visitors to come to my home and drive by what is actually a junk yard.”

Lvette Melendez, 59, a medical technologist, recalled the recent day of her daughter’s wedding.

Melendez said every one of the 44 out-of-town guests who came to her home that day asked the same question when passing by Englert’s property: “What’s wrong with that house?”

Yiwen is a reporter for WUFT News who can be reached by calling 352-392-6397 or emailing news@wuft.org.
Previous UF Research Could Help Settle Kratom Controversy
Next Alachua County Commission Concerned About ‘Lack Of Good Information’ Over Proposed Phosphate Mine