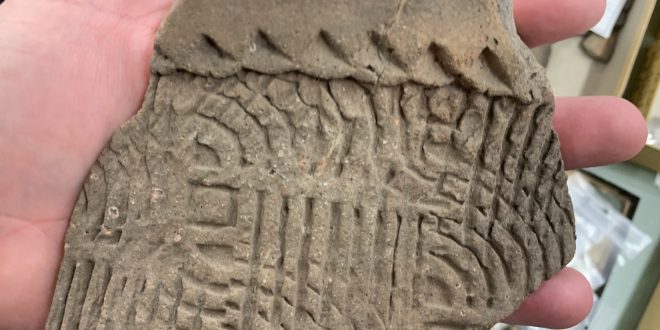 This piece of Native American pottery will be stored in an acid-free box to prevent decaying. (Isabelle Mencia/WUFT News)

An important collection of Floridian artifacts will finally be getting an upgrade in the coming year.

The Florida Museum of Natural History has received almost $100,000 to upgrade over 20,000 artifacts from excavations of the Franciscan mission site of San Juan Del Puerto.

The grant was awarded to the Florida Museum of Natural History by the Save America’s Treasures program, a federal program that helps preserve nationally significant historical collections.

“With this being one of the longest-lasting missions in Spanish Florida, it’s very important to maintain these collections in a good archival state, so that as archaeological research and technology increases, we get a better understanding of the lives of the people on the missions,” he said.

The site is located on Fort George Island, near Jacksonville, and was founded in the late 1500s and lasted until 1702, when the British started invading Florida.

There are three goals for this project. The first is to stop the deterioration of the artifacts, which are mainly Native American and Spanish pottery, by storing them in acid-free boxes and bags.

The other objectives are to curate records associated with excavations of the site and to improve public awareness.

The site was first excavated in the 1950s and 1960s, and the collection as a whole hasn’t been analyzed since the 1970s.

The grant will allow museum staff to not only stop further deterioration of the artifacts but also to do extensive analyses of them with 21st century technology.

“These technological studies and this in-depth analysis and reanalysis is going to answer kinds of questions and things that have been hypothesized, for the last five, six decades, since these sites were excavated,” Donna Ruhl, Florida archaeology collection manager, said.

“It’s going to be a great opportunity to reanalyze, reinvestigate, rethink and requestion.”

San Juan Del Puerto was the head of the Franciscan order for missions in Florida in the 17th century, with friars and Native Americans living at the site.

Studying the artifacts helps archeologists better understand the impact that missionaries and colonizers had on the lives of the Native Americans living there.

Records also show that Francisco Pareja, a missionary stationed at the San Juan Del Puerto, helped record the language of the Timucua people.

Documents like this “helps us to sort of give a voice to those without a voice in the past,” Waters said.

Soon they plan to have the collection available for everyone — from researchers to the general public — via an online database.

It will include photos of artifacts, digitized records, excavation photos, historical maps, stories about people who lived on the site and more.

“We really want to get this information out so that people can use it, learn about it and appreciate it,” Waters said.

While a website on San Juan Del Puerto is coming soon, the museum already has future goals for a database on missions throughout the Americas, not just the Southeast.

“We’d like to sort of be the clearinghouse of mission archaeology,” Waters said.

Isabelle is a reporter for WUFT News who can be reached by calling 352-392-6397 or emailing news@wuft.org.
Previous “I Will Not Go Quietly”
Next The Point, Dec. 9, 2019: Floridians Mourn, Ask Questions In Wake Of Shootings In Miramar And Pensacola