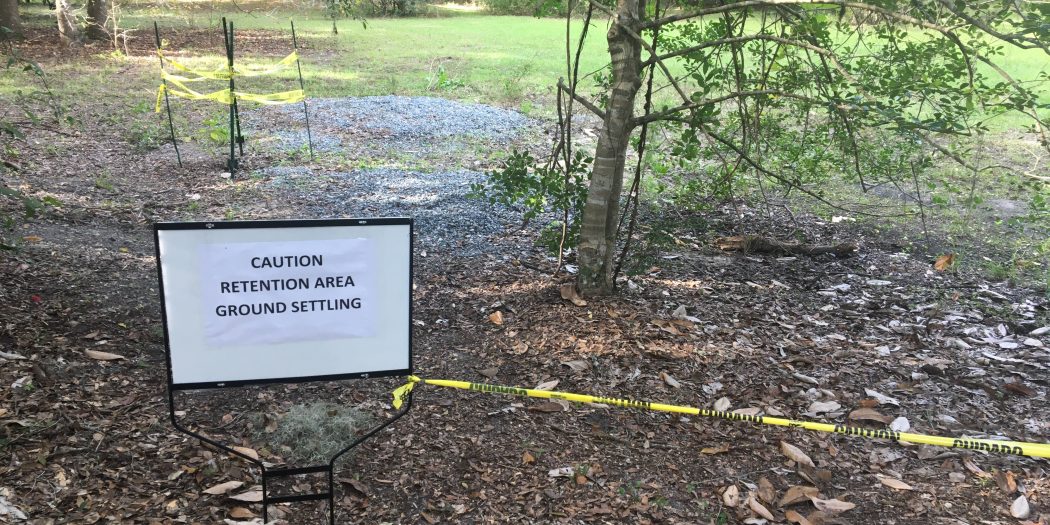 On any given day, runners, cyclists and Haile Plantation residents out for a stroll dot the trail running along Haile Boulevard.

When they pass the intersection at Southwest 95th Terrace, they can see two sinkholes have opened up near their path.

It’s not the first time this has happened in the leafy southwest Gainesville neighborhood.

Peggy Willumson has lived in Haile Plantation for 18 years and, according to a Nov. 20 email she sent to the Alachua County Commission, she’s seen many sinkholes in that time.

And each time the county has filled a sinkhole, Willumson wrote, it’s opened up again.

“We need more than trucks full of gravel, clay, cement, etc.,” she wrote.

In 2012, a Jeep Wrangler fell into a sinkhole that opened underneath it on Southwest 52nd Avenue in Haile Plantation. At the time, residents said it was the third sinkhole to open up in that location.

Willumson is one of several people living in Haile Plantation who have asked Alachua County to conduct an engineering study to help determine a solution to the sinkhole problem.

Steve Faraone also lives in the development and emailed county commissioners the day after Willumson did to ask for an engineering study and a remedy to the sinkholes.

“They are about 15 feet from a very highly used bicycle/walking trail,” Faraone wrote, “and pose a danger, especially to children and the elderly.”

James Link, stormwater engineer for Alachua County Public Works, said while this county isn’t among those considered to be in what’s known as Florida’s “sinkhole alley,” it has dealt with its fair share of sinkholes.

“We are well-acquainted with them,” he said with a laugh.

Link said the reason for the numerous sinkholes in Haile Plantation is related to the area’s geological characteristics.

Sinkholes in Florida are commonly caused by groundwater eroding limestone below the surface, which creates underground caverns that collapse to form sinkholes.

“The limestone there is closer to the ground surface,” he said. “So you’re more likely to have sinkholes there than in other parts of the county.”

Gavarrete wrote that the area of Haile Plantation “is known for its karst topography.” Karst refers to a topography with carbonate-rich rock that’s prone to caves and sinkholes.

The public works staff and the property manager said, according to Gavarrete, the current sinkholes are smaller and likely the result of voids in the rubble the county had used to fill them previously.

“Staff’s opinion is that this hole presents a pretty good level of stability,” he wrote in his email.

The homeowners association president told public works staff about a plan to put up a fence to separate the sinkholes from the trail.

Gavarrete then wrote that the county will not be conducting an engineering study, despite residents’ requests.

“Since the severity of the sinkholes in the area seems to be diminishing, we will continue to monitor,” he wrote. “However, public works will not be pursuing a study at this time.”