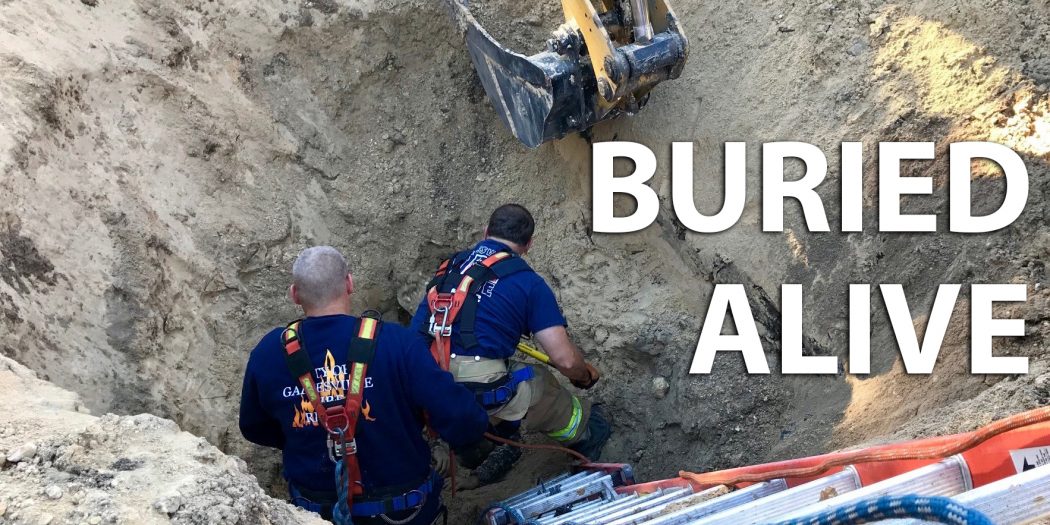 Gainesville firefighters worked that January day to first free the construction worker's head from under the dirt. He was trapped after a trench bank collapsed on him, covering him entirely under the soil. (Photo courtesy of Gainesville Fire Rescue)

A Deep Construction Hole Collapsed On A Florida Laborer: Here Is The Story Of His Chaotic Rescue

His hard hat tumbled to the bottom of the 16-foot deep hole. Forget about it, his operator said. They had others he could borrow.

He climbed down the extension ladder into the base of the pit, nearly half as deep as a telephone pole. His coworkers warned him to get out, but he did not. It was a rookie mistake that almost cost him his life.

In seconds the wall of the hole collapsed. Clay-like soil swallowed him into the ground. No one could see him; he was trapped.

He was buried alive.

The 24-year-old laborer was buried for 28 harrowing minutes before he was saved during a chaotic, heroic rescue effort by firefighters. When they freed his head, he was blue from asphyxiation but sustained no major injuries.

Now, interviews and government records about the case provide significant new details about the nightmarish accident.

This reporting is based on a review of nearly 200 pages of official reports, emails and witness statements obtained under state and federal public records laws by Fresh Take Florida, a news service operated by journalism students at the University of Florida.

‘This is not safe’

The accident happened on Jan. 10 at the Malcom Randall VA Medical Center in Gainesville during work on a $16.5 million contract to reconstruct the hospital’s boiler plant.

A four-month investigation by federal safety regulators determined the victim’s employer, Total Earth Services LLC of Wildwood, Florida, violated safety rules involving worker protection. The severity of the violation was a 10, the most egregious on the agency’s measuring scale. In its own internal emails, the Department of Veterans Affairs called the situation a “near catastrophic accident.”

Total Earth Services initially was fined $9,282 by the U.S. Occupational Safety and Health Administration for not protecting employees from cave-ins with an “adequate protective system” and “exposing an employee to engulfment hazards.” The company negotiated the fine down to $6,282 during a settlement earlier this summer.

In its own internal emails, the Department of Veterans Affairs called the situation a “near catastrophic accident.”

Internal emails revealed that the excavating and construction crew used a backhoe to dig a hole that day to check for groundwater. The victim climbed into the hole without a safety harness to pick up his helmet, against his coworker’s advice, after he knocked it off with a grade rod. Total Earth Services later acknowledged in its post-accident report that the scene was an “improper excavation” and safety equipment was not used or provided.

“I said, ‘This is not safe,’” an unidentified supervisor told investigators. “They proceeded to go down the ladder. I turned to return to the office to get the safety regs [sic] when I heard yelling and returned to the site to see a cave in.”

The victim, whose identity was censored in every government report about the accident, acknowledged that his coworkers told him to leave his hard hat and get out of the hole before the walls collapsed. His name remains a mystery, despite more than a dozen interviews with people directly involved. No one will identify him.

“I was told to get out of the hole quick and then I got buried under the sand,” the worker wrote in a statement to investigators. “I was awake the whole time I was under.” Rescuers reported he was conscious but disoriented when they dug far enough to find his head and clear a passage for breathing – more than 10 minutes after the collapse. His ears were blue.

A private investigation done by Circle Safety & Health Consultants of Richmond, Virginia, determined that Total Earth Services “made a substantial change in the scope of work for the day” without notifying the general contractor.

The report also noted that the supervisor for Total Earth Services was “not competent to manage trenching and excavation operations.” He also later admitted to this in an interview with OSHA.

Supervisors for Greenland Enterprises and Saw Contracting, the principal contractors for the project, were also cited in the internal investigation by Circle Safety & Health Consultants for not having a site-specific safety plan for review on site and not ensuring the worker left the hole after the excavation was deemed unsafe.

Executives for Total Earth Services, Greenland Enterprises, SAW Contracting and another firm involved in the project, Oelrich Construction, declined to discuss the accident or answer questions about safety improvements at the site without written permission from the Veterans Administration.

In the initial 911 call, at approximately 9:17 a.m., the caller told Gainesville Fire Rescue a person was trapped in a trench at the corner of Southwest 16th Avenue and Archer Road, behind the hospital. The nearest fire station is less than 900 yards away.

When firefighters arrived, no one at the scene was waiting for them, according to radio traffic and the agency’s after-action report.

“I’m at the corner of 16th Street, 16th Avenue, can you give me any more direction toward where this is at?” a firefighter asked dispatch in the radio call. Firefighters noticed there was construction closer to 13th Street, and the dispatcher was urged to call back and ask if the employee was buried along the side of the road or in a nearby parking lot.

It wasn’t until a security guard walked over to unlock the gate at 16th Avenue, that they realized where the accident happened, Gainesville Fire Rescue District Chief Jeff Schuhmacher said.

At 9:26 a.m., nine minutes after the first 911 call, firefighters arrived. They couldn’t find the victim until a construction worker pointed to a hole and said his coworker was buried at the bottom of the ladder. Rescuers had seconds to assess the situation.

Firefighters asked where was the victim, Shuchmacher said. A construction worker told them he was in the hole, pointing into the ditch. Rescuers again looked into the empty trench and, ominously, saw nothing but the top of a ladder poking from the dirt.

“My initial thought was that this was going to be a body recovery,” Gainesville Fire Rescue’s Jeff Schuhmacher said.

Firefighter Rutledge Rodgers leaped into the hole without a safety harness while others fetched shovels and began digging out the laborer by hand.

During the rescue, firefighters said they repeatedly asked for boards to place around the hole to evenly distribute the weight of rescuers and prevent further collapses: “Plywood for ground pads was requested multiple times and was never received,” the report said.

“My initial thought was that this was going to be a body recovery,” he said.

Schuhmacher described the incident as “a miraculous rescue.”

Eight days after the accident, Greenland Enterprises and SAW Contracting said in internal emails that they were replacing the Total Earth Services crew and supervisor “with a fully trained, competent crew,” would conduct frequent safety inspections and require weekly 10-minute safety meetings.

Six months after the accident, Total Earth Services notified OSHA and its own employees that it was halting all work for part of one day – a companywide stand down across Florida – to remind its workers about safe digging practices.

The ex-employee, who had been pulled by rescuers barely breathing from the hole, had already been fired by the company and did not participate.

Melissa is a reporter for WUFT News who can be reached by emailing news@wuft.org or calling 352-392-6397.
Previous The Point, Dec. 2, 2019: Before And After Photos Highlight Evolution Of Gainesville’s South Main Street
Next Morning News In 90: Dec. 2, 2019