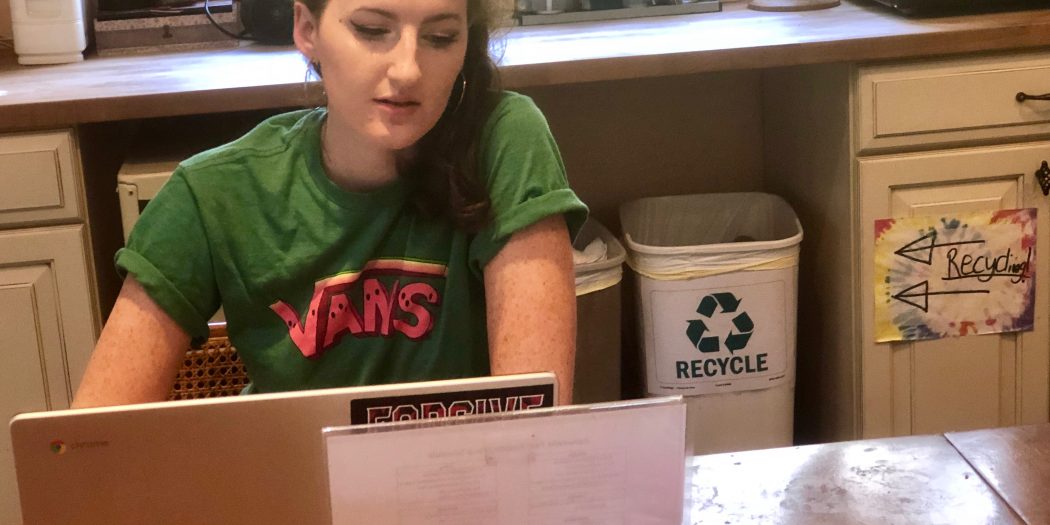 One of the certified peer specialists, Janelle Stewart, says that the kitchen, where they hold pizza parties every Friday, is her favorite room in the house. “It’s so sunny and bright,” Stewart said. “It’s a casual place for discussion and gatherings, if people want to talk. If not, that’s fine too. We just sit here and color sometimes.” (Juliana Cuadra/WUFT News)

Every year, it’s the same.

Jessica Haymes knows she’s supposed to be happy. She sees the Christmas lights and families bustling for gifts in the mall. She hears the Christmas music and the carolers singing. She smells the frosted sugar cookies baking in the oven. But the truth is “the happiest season of all” is a time of loneliness and despair for her.

Haymes, executive director of Gainesville Peer Respite, knows this feeling all too well, having dealt with seasonal depression and substance abuse. Now that her mental health is finally in a better place, her background makes her even more determined to help others. Peer Respite offers free mental health support in a more informal, unorthodox way. Located on 728 E University Ave, the non-profit organization works to create an accepting environment and sense of community for people dealing with mental health problems, as well as people who just need a break from the stresses of life. Led by certified peer specialists – all of whom have suffered from some form of mental illness or addiction – Peer Respite offers mental health assistance, often to those who otherwise would have limited access to counseling.

Haymes notes that although seasonal affective disorder spikes around the holidays, starting as early as September and ending as late as February, the need for mental health care is high year-round.

An estimated 42.5 million American adults suffer from some form of mental illness. Of these, 10 million Americans specifically battle seasonal affective disorder, a type of recurrent major depressive disorder in which episodes of depression occur during the same season each year, according to Mayo Clinic. In addition, 64% of people with mental illness report holidays make their conditions worse, according to a 2014 survey done by the National Alliance of Mental Illness.

Regardless of when mental health issues arise, many Floridians struggle to find the help they need.

Florida ranks lowest of all 50 states in per capita mental health support, spending only about $36 per person, compared to the U.S. average of $126, according to the Florida Health Behavioral Association.

Haymes said she hopes Gainesville Peer Respite – the only peer respite center in Florida —  will inspire others to open more centers, thus providing more options for those who do not have the means to access  traditional mental health care services.

“We try to foster a welcoming, non-clinical environment to all guests,” Haymes said. “We believe that it’s OK to not be OK, and it’s OK to be you. We are not here to ‘fix’ someone. We want to empower people, to give them options and to allow them to make choices for themselves.”

The Peer Respite center’s services are free and include allowing guests 18 and older to stay overnight up to eight times a month in a home-like environment, where they can participate in events such as Friday night pizza and movie nights, support groups and wellness activities such as yoga, sports or playing board games. They also have specific support groups for the LGBTQ+ community and people who have experienced trauma, as well as personal peer-to-peer support groups.

Will Montux, the director of operations, was once a guest at Peer Respite and credits the program with empowering him and giving him his voice.

“Peer Respite taught me that I’m not alone,” Montux said. “I didn’t feel like I had a voice, but they made me feel heard.”

Through activities and overnight stays, Peer Respite’s staff hope to reduce the number of psychiatric hospitalizations. In fact, Haymes said that according to a 2018 study, access to  peer respite services decreased hospitalization by 2.9 instances per person. In another study by the Human Services Research Institute, a nonprofit organization dedicated to improving the overall effectiveness of all human services through research, respite guests were 70 percent less likely to use inpatient or emergency services than those who didn’t use respite services.

“We are not here to say that we’re a better mental health option,” Haymes said. “We just simply want to give people options and make mental health more open to discussion.

“The truth is that some people are intimidated by clinical settings or are afraid of being judged or labeled, so we are here to give them encouragement and support and let them know they’re not alone,” she said. “They can choose to talk about it or not, but either way, we want to create a sense of community.”

The Peer Respite model, first created in New Hampshire, has proven so effective that it has spread throughout the United States and is now available in California, Florida, Georgia, Iowa, Massachusetts, Nebraska, New Hampshire, New Jersey, New York, Ohio, Pennsylvania, Vermont and Wisconsin.

“The goal of Peer Respite centers is to make mental health care more accessible to people and to make meaningful connections with other people with similar experiences,” Jenkins Tucker said.

Haymes hopes other Florida communities will open respite centers so that more people will get the support they need. Beyond that, she wants mental health care to be destigmatized.

“I was raised by very conservative parents who didn’t talk about mental health at all. In the rare cases that they did talk about me and my mental health to other family members, they would always say ‘Jessica is a little special,’” Haymes recalled.

Juliana Cuadra is a reporter for WUFT who can be reached at julianacuadra@ufl.edu.
Previous Gainesville Declares State of Emergency with Climate Proclamation
Next Two Gainesville Democrats Join 2020 Election for House District 20