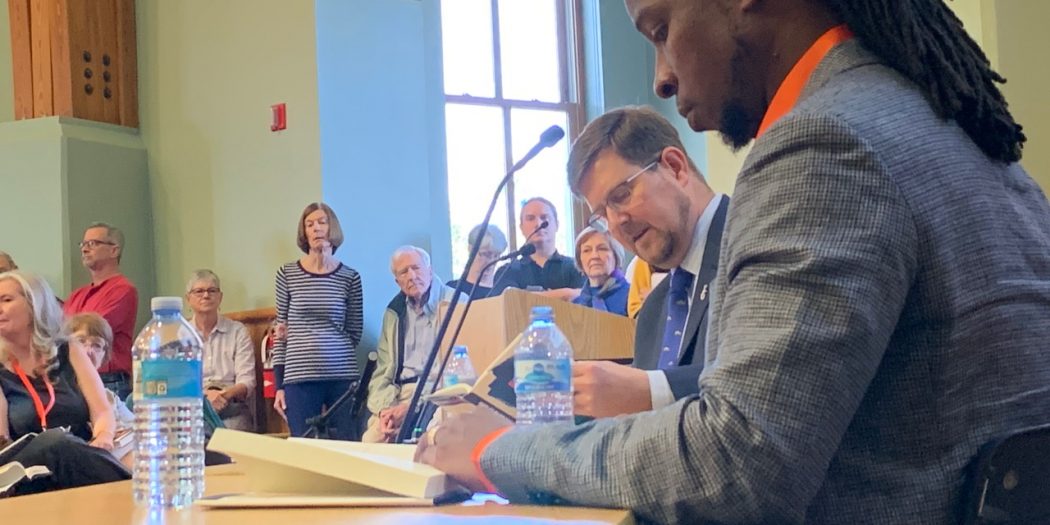 Gainesville Mayor Lauren Poe and Ibram X. Kendi read through an excerpt of Kendi’s latest book during a discussion about different aspects of being anti-racist. (Sophie Feinberg/WUFT News)

After he was introduced by Mayor Lauren Poe, more than 200 people rose to their feet Thursday to welcome Ibram X. Kendi back to the city where he once taught African American history.

“There’s no love like that Gainesville love,” Poe told Kendi, a former University of Florida professor and acclaimed author, historian and scholar of race and discriminatory policies.

Now founding director of the Antiracist Research and Policy Center at American University in Washington, he visited Gainesville to promote his latest book “How to Be an Antiracist.”

“I am deeply honored and humbled to be back in one of my homes,” Kendi told the audience seated at the Alachua County Library District headquarters branch on University Avenue. “I actually started writing this book as a resident of Gainesville.”

Kendi won the 2016 National Book Award for Nonfiction for his book, “Stamped From the Beginning: The Definitive History of Racist Ideas in America.” He said his new book, which looks at racism and inequality in the U.S. and in individuals, was incredibly hard to write.

Poe and the library invited Kendi for his Mayor’s Book Club and its annual speakers series. Moderating a discussion, Poe asked him to touch on the realities of racism in the U.S.

The problem is longstanding failed national policy, the author said.

“We’ve been having this debate as a country since its inception,” he said.

“What a racist says is,” he added, referring to the haves and the have nots, “the group has more because they are more. And what an anti-racist says is, it’s because of racist policy.”

The new book’s final chapter, titled “Survival,” has Kendi relating his and his wife’s cancer diagnoses and treatments – they are both cancer free, he said – with the idea of fighting racism.

“It is very, very difficult for Americans to really believe and admit that this country is facing metastatic racism that has spread to every aspect of the body politic,” he told the audience.

He said the same should apply to battling racism.

“We can treat this nation’s racism in the way we treat cancer. In order for us to go through that extremely painful process, we have to believe this nation, and even ourselves, can survive.”

Joanne and Scott LaFramenta, both retired teachers who live near Gainesville High School, attended the event together. They had read “Stamped from the Beginning” previously, and his latest book after Joanne Laframenta saw it mentioned in the New York Times’ The 1619 Project.

“It’s probably refreshing in the way the country seems to be going politically to hear something positive about race,” Scott LaFramenta said after Kendi’s talk. “And I’m very impressed with the people here in Gainesville, the way they received this.”

Amanda Tudeen, 31, of Northwest Gainesville, said she thought it was necessary to attend.

“It’s important to be talking about racism, especially in a day when, like Dr. Kendi said, a lot of people say racism doesn’t exist, which is an even bigger problem,” said Tudeen, an occupational therapist.

Kendi also spoke at a similar event Thursday evening at the Curtis M. Phillips Center for the Performing Arts at UF.

“Many people don’t want this country to begin the process of healing because it’s grueling,” Kendi told the 1,600 people who attended there.

“Either we continue as we are and pain is guaranteed,” he said, “or we go through the process of healing where there will be pain but we have the chance to heal from racism.”

Flood the body with anti-racism and prevent its reoccurrence, he argued.

Marah Malleck, 24, a political science graduate student from Tampa, said she appreciated his point of view.

“The book is a wonderful tool for educating everyone as I navigate a world in which I interact with various political ideas, especially in this political climate,” Malleck said.

Rolda Darlington, 37, another graduate student studying political science, said she attended to support her former professor, and because his writing and research is so fascinating and timely.

“We can’t start too soon to have deep conversations like this,” Darlington said.

Correction appended: A previous version of this story misstated the attendance at the Phillips Center event as 200.

Sophie is a reporter for WUFT News who can be reached by calling 352-392-6397 or emailing news@wuft.org.
Previous Nov. 21, 2019: Afternoon News In 90
Next GNV Breaks Ground For Terminal Expansion