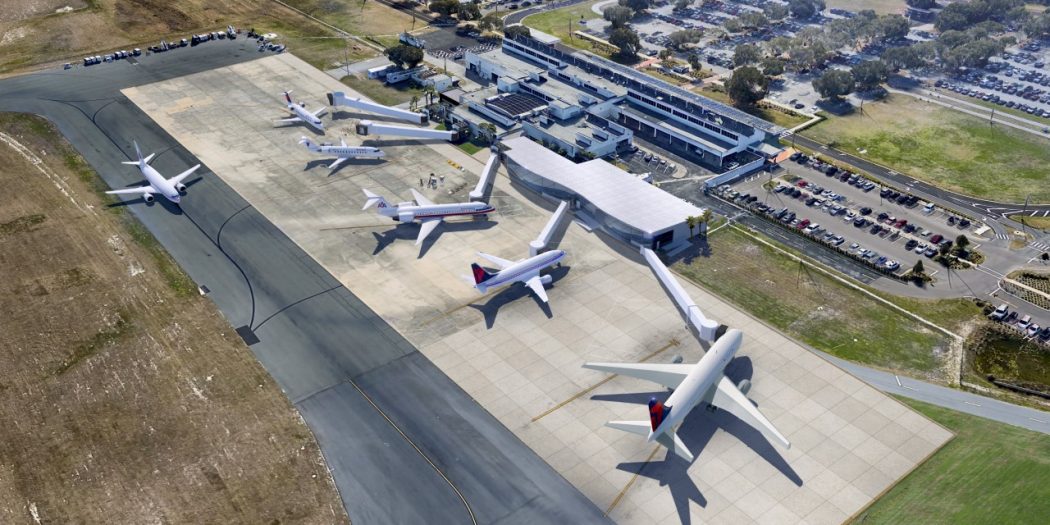 An aerial view of the future airport expansion shows the two new passenger bridges on the far right. They will be able to accommodate narrow-body planes. (Courtesy of Gainesville Regional Airport)

Gainesville Alachua County Regional Airport Authority board members on Thursday hosted a groundbreaking ceremony, one that marks the beginning of construction on the airport’s terminal expansion and renovation plan.

“This is the year of great improvements for GNV,” Board Chair Grace Horvath said.

Some improvements include the addition of 322 more seats where guests can wait. Most will have portable charging stations. The TSA area will be renovated as well. A new glass TSA partition wall will be added to create a second screening lane, as will additional space for vendors and food.

Although many changes are happening at the Gainesville Airport, passengers should not expect delays once the construction begins. The airport team has established a system for efficiency.

“The construction area will be closed off from the traveling public,” spokeswoman Erin Porter said, and “other work that will be done in the existing terminal will take place in such a way to be minimally invasive to our passengers.”

For areas such as the new TSA checkpoints, construction will only take place during closed overnight hours, so passengers will not be delayed. The same goes for the terminal renovations. Porter said that at some point construction on plane boarding bridges may mean flights will have to be loaded on the ground, “but this is something we already do at GNV.”

The 15,200-square-foot terminal expansion will be able to accommodate most narrow-body planes and create two passenger boarding bridges.

Doug Wilcox, chief executive of Scherer Construction and the expansion project leader, is excited for the work to begin.

“One of my favorite things about building anything is coming back to it and being able to use it,” Wilcox says. “The more people that use it, the more efficient and the cheaper  it will be.”

Terminal expansions are expected to be completed by 2021.