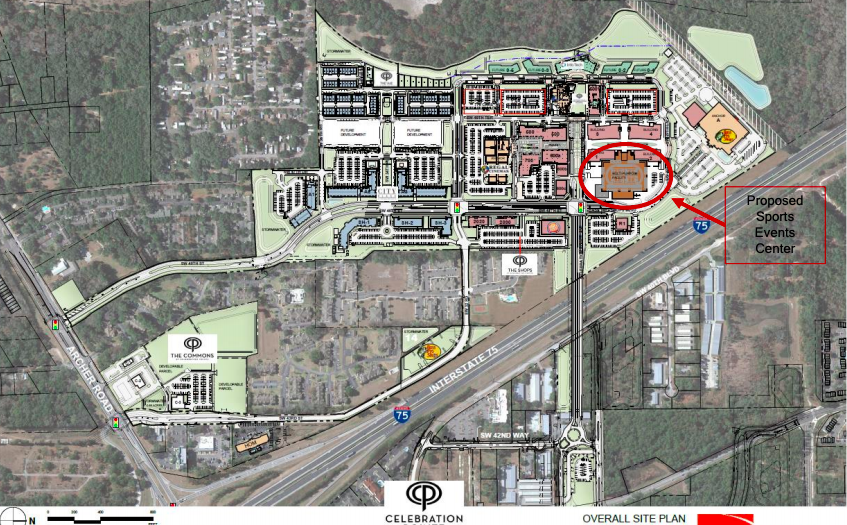 The leading possible location of a sports arena is off of Interstate 75 in Celebration Pointe. (Courtesy of Victus Advisors)

A portion of the Gainesville City Commission remains skeptical of a proposed location and concept of the sports and event arena potentially coming to the area.

Commissioners on Thursday discussed alternate possibilities at their biweekly meeting, continuing a monthlong split between two of the area’s key governing bodies.

The development and planning of this arena has been in the works for the better part of the past two years.

Celebration Pointe is a growing area of businesses in Gainesville, and county leaders feel it would be the best location for a sports arena. A few city commissioners, however, feel differently.

At the commission meeting Thursday, the commissioners voiced their concerns about the lack of growth in East Gainesville, and whether or not a sports arena is the best way to remedy that.

Further discussion on this proposal will be discussed Dec. 2 at 3 p.m. in a joint city-county commission meeting.

Mayor Lauren Poe said a sports complex in Celebration Pointe may be economically viable, but he had some concerns.

“Is that the highest, best use of public money? I’ve not heard a convincing argument of that,” Mayor Lauren Poe said.

Commissioner Adrian Hayes-Santos proposed a feasibility study for the event center to instead be built in the downtown area or East Gainesville, outlining a few different locations and arguments supporting reconsideration.

Hayes-Santos said an event center in downtown Gainesville would impact tourism positively, as visitors would see east Gainesville in addition to the more popular areas such as Archer Road.

“Their first time coming to Gainesville is going to be Butler Plaza, Archer Road, Celebration Pointe area which, in my opinion, does not show the true character of our city,” he said.

The arena would bring revenue and traffic to small businesses whose profits will go to the city, whereas most businesses at Celebration Pointe are corporate, so the profits would go to the respective companies, he said.

The majority of the city commission said that since an event center is such a large financial and locational undertaking, all possibilities should be considered before a decision is made. The total cost of the project is currently around $30 to $50 million.

According to an operations analysis by Victus Advisors, the center would have at least eight indoor hardwood courts, an indoor track, 3,000 portable or retractable seats and parking for up to 1,150 vehicles.

One of the locations Hayes-Santos proposed is the Innovation Square area between downtown and the University of Florida campus. UF owns the majority of the land, which Hayes-Santos said would be beneficial if the university were to become a primary user of the center.

Close proximity to UF could result in a partnership between the university and the government that owns the event center. No UF representatives spoke on the topic at Thursday’s meeting.

This area of the city, Hayes-Santos’s report said, has also needed a parking garage, which would be built in addition to the event center.

Another proposed location was the Depot Park or the Power District area. Specifically, west of the Rosa Parks Transfer Station so that a parking garage could be built on top of it. Other potential parking locations included south of the Depot Park area, which is owned by the city.

The commission pointed out that a lot of time and money has already been spent on Depot Park and the surrounding areas, so they want to build further on those investments.

The final proposed location was 238 W. University Ave. This area is the most core downtown location, according to the city commission, and a northern or southern location could be a possibility.

A parking garage would be added in these areas as well, as the city owns the northern part of this area.

Commissioner Gail Johnson said she is opposed to supporting a feasibility study for the downtown area at all.

She spoke about a time when she lived in Brooklyn, New York, and an event center was built, impacting residents and traffic.

“There was this big concrete box in the middle of neighborhoods, and it was really devastating for the community,” Johnson said.

Commissioner Helen Warren was also opposed to placing the event center downtown. She said it would affect traffic, residents would leave the surrounding neighborhoods and preserving the history of the area would be more of a challenge.

The operations analysis done by Victus Advisors presented strengths and weaknesses of the Celebration Pointe location.

There are opportunities to satisfy what Victus, the consultant, described as the demand for a local sports and event building.

A few weaknesses included the fact that the site is privately owned, which could bring complications during negotiations and any subsequent legal issues. Development at Celebration Pointe, Hayes-Santos said, could also redirect improvement efforts from east and downtown Gainesville.

A problem brought up with the event center regardless of its ultimate location in the area is a lack of a major airport nearby should there be regional or national events. There are larger facilities in nearby cities such as Jacksonville and Orlando, and this arena would bring competition for any future event centers being built in Gainesville.

Alachua County spokesman Mark Sexton responded to the commissioners’ discussion regarding the arena. He said the county is interested in building an event and conference center in the downtown area, but a sports arena is a very different project.

As the commission’s Gainesville Community Reinvestment Area (GCRA) funding partner, Sexton said the county would encourage the city to fund a feasibility study. The funding of this study would come from the CRA.

The mayor said he would like to further discuss what exactly this sports and events arena would entail and to establish what tourism dollars are allowed to be spent on and the legalities of the project as a whole.

He declined to make a motion on a feasibility study.

Nicole is a reporter for WUFT News who can be reached by calling 352-392-6397 or emailing news@wuft.org.
Previous United Way Of North Central Florida And Bite Squad Partner To Pack 9,000 Meals
Next The Point, Nov. 22, 2019: Special Report: ‘The Battle Of Bone Valley’ Details Fight Over Union County Phosphate Mine