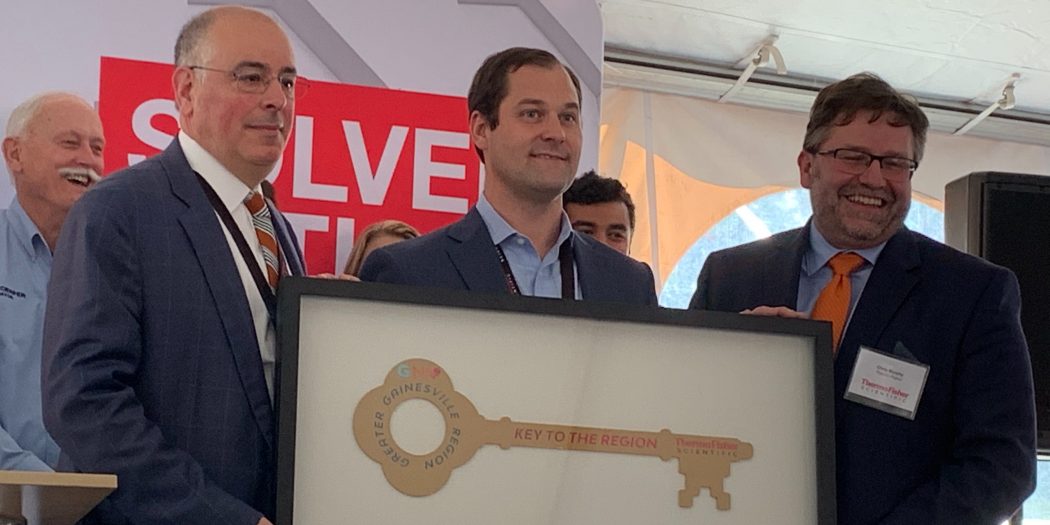 (Left to right) Richard Snyder, Larry Pitcher and Chris Murphy hold the “key to the region,” which was gifted Friday to Thermo Fisher Scientific from the Greater Gainesville Chamber of Commerce at the debut of the company’s $6 million expansion. (Lina Ruiz/WUFT News)

Local and state officials gathered Friday in Alachua to commemorate a $6 million expansion at Progress Park.

“I’ve been in this industry for over 20 years in gene therapy, and over the last three years, it’s completely transformed,” he said. “This site and this group and these folks here couldn’t be better positioned to be part of that revolution.”

Larry Pitcher, general manager and head of the Alachua site, said the company at its three-building location currently employs about 250 people who work with viral vectors “to treat and potentially cure rare, complex diseases.”

O’Connell noted that the research started 16 years ago at the University of Florida when Richard Snyder founded Florida Biologix, which changed to Brammer Bio through a merger with Brammer Biopharmaceuticals in 2016. Brammer Bio then merged with Thermo Fisher Scientific in May.

“I think it’s critical to recognize these things don’t happen overnight,” he said.

Murphy said he first came to Progress Park 18 years ago. He highlighted the influence of the company merger and the scale of the industry.

“(It’s) been just a remarkable synergy and nothing but positiveness, and, frankly, the investment continues,” he said. “$270 million will be invested by pharma-services groups across the world.”

Pitcher mentioned the continued growth of the Alachua site over the last two to three years and the increase of about 150 jobs.

“It’s really about the patient communities that we serve,” Pitcher said, “and getting these therapies to them as soon as possible.”

Lina is a reporter for WUFT News who can be reached by calling 352-392-6397 or emailing news@wuft.org.
Previous Two Gainesville Democrats Join 2020 Election for House District 20
Next Little Orange Creek Reopens With “Relaxing And De-Stressful” Nature Day

Nature trail in your yard? This is a reality for future Emerson community residents

A new neighborhood is in the works to help residents incorporate wellness into their lives with help from nature trails and community spaces.