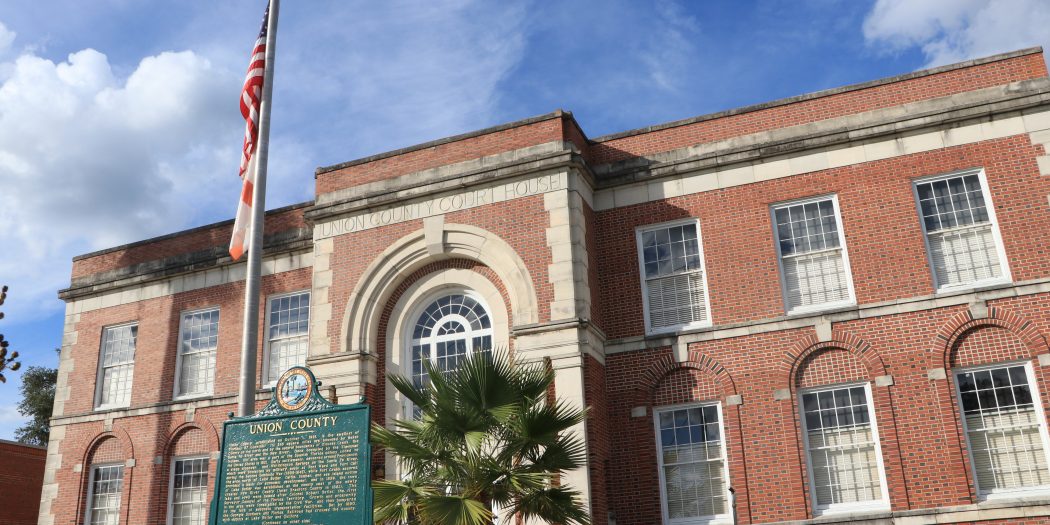 The Union County courthouse, which stands in the center of Lake Butler's main road and at the heart of the town. (Kelly Hayes/WUFT News)

The Battle of Bone Valley: Part I, The Case Tolling Florida’s Smallest County

When you cross the bridge over New River on Florida State Road 231 to enter Union County, not much changes.

The road is still paved. You are still surrounded by green pastures and farms connected by gravel paths. The fences still guard oaks, their leaves rustling in the breeze over cows looking for shade.

But what you can’t see when you enter the county is what’s underneath. Below the layers of earth, more than 30 feet down, lies a mineral that has set the county into turmoil: phosphate.

HPS Enterprises II, a phosphate mining company made up of three Union County families and one Bradford County family, is suing Union County for $298.75 million – more than 41 times the county’s total 2019 budget – because of the county’s recent limitation on how the land can be used. This new rule, stemming from environmental concerns, restricts phosphate mining in wetlands and environmentally sensitive areas, which include the mine property.

HPS Enterprises II filed the suit in March 2019; then in April, the county submitted a motion to dismiss the suit. The case is at a standstill, waiting for a ruling from Circuit Judge Denise Ferrero.

If HPS Enterprises II wins, Union County, which had a total budget of $7,267,543 in 2019, may have two options: dish out hundreds of millions of dollars or allow phosphate mining.

WUFT News reached out to HPS Enterprises II via email, phone, Facebook and through lawyers, but could not reach them for comment. Kent Safriet, the company’s lawyer, and David A. Theriaque, the county’s lawyer, both said they could speak only on the procedural standing of the case.

According to court documents and the company’s website, HPS Enterprises II is a partnership formed by the Hazen, Howard, Pritchett and Shadd families, who own the acreage and want to secure permits to allow phosphate mining on their property. According to Sunbiz, the company is managed by Jack E. Hazen of Bradford County.

The HPS Enterprises II mine consists of 5,641 acres of private property along the southern border of Union County and extends about 5,000 more acres in Bradford County. According to court documents, there are 37 parcels of the property in Union, grouped on the border between the two counties.

To comply with the Florida Department of Environmental Protection, the planned minable area of the Union County property was cut to 2,420 acres, which holds an estimated 17,482,800 tons of phosphate, according to court documents. The property sits on about 2,840 acres of wetlands, and with Union County’s new law, only about 300 acres of the property can be considered for mining.

In order to mine that land, the company would have to get a permit from the county, Thomas Hawkins, the program director for the University of Florida’s urban and regional planning online master’s program and a lawyer in property law, said. HPS Enterprises II would also need approval from the Florida Department of Environmental Protection and the Suwannee River Water Management District.

“Before changing the land use of a property or doing any development activity on a property, you’re going to have to get a permit from local government,” Hawkins said.

But the Union County Commission put the company’s plan to submit a local permit application on hold in April 2016.

That’s when the county commission implemented a moratorium to postpone the review and approval of phosphate mining permit applications for a year, preventing the start of any mining.

The county commission renewed the moratorium in 2017 and again in 2018, making it last until February 2019. During this time, the county was working on constructing an amendment to prohibit phosphate mining in wetlands, and by 2019, the amendment had become legally effective, preventing HPS Enterprises II from mining.

According to court documents, the county implemented these moratoriums after a group of citizens expressed concerns for the environment, emphasizing the risk to local water sources.

The HPS Enterprises II mine property straddles the New River, which divides Bradford and Union counties. The New River is also a major tributary of the Santa Fe River and is a critical habitat for a freshwater mussel called the oval pigtoe, listed as an endangered species by the U.S. Fish and Wildlife Service, according to court documents.

Robert Knight, the director of the Howard T. Odum Florida Springs Institute and an environmental scientist, worked as an environmental consultant for phosphate mining companies starting in 1981.

He looked at the impact of the mines on water quality, one of the biggest issues with phosphate mining.

Kissingen Springs in Polk County dried up in 1950 due to phosphate mining near the area in the 1940s, Knight said.

The HPS Enterprises II mine could potentially reduce pressure in the Floridan Aquifer, which in turn could reduce the flow of the springs, Knight said. From the most recent estimates, the springs on the Santa Fe have already lost at least 28% of flow, meaning depleting it more could cause significant damage.

“The Santa Fe River does not need another impact on it,” Knight said. “I think it’s unavoidable that any phosphate mining, any kind of intensive activity, in that part of the of the watershed for the Santa Fe River will impact it forevermore.”

As of January 2019, the HPS Enterprises II mine had not received approval from the Florida Department of Environmental Protection or the Suwannee River Water Management District; both agencies would have to approve mining on the property.

Despite the moratorium, in July 2017, HPS Enterprises II submitted an application to Union County for a phosphate mining permit.

During this time, the county was faced with another case from HPS Enterprises II; however, it was not related to the moratoriums or even the legality of mining on the property. In April 2018, HPS Enterprises II filed a complaint with the county Circuit Court over a public records request.

In this case, which was settled in February 2019 and reclosed in October, HPS Enterprises II had requested any and all records since Dec. 20, 2016, concerning phosphate mining in Union County, according to court records.

However, HPS Enterprises II claimed not all records were delivered, as evidenced through text messages between commissioners on the matter, which is public record if the messages discuss county business. The claim also found that commissioners Karen Cossey, James Tallman and Woody Kitler used personal email addresses to discuss the requested material.

These public records were not delivered in the initial request with Union County. The case concluded with the parties resolving the issue and the county having to pay for HPS Enterprises II’s attorney fees.

The 2019 case, however, stems from actions the county took during the moratoriums. While these were in effect, county officials also were working to amend the county’s comprehensive plan.

Florida statutes require every local government to develop a comprehensive plan, which regulates things like the environment and water quality, Hawkins said.

In May 2018, Union County adopted Ordinance No. 2018-04, “Plan Amendment,” which restricted mining activities previously allowed because of its location on wetlands. This change to the comprehensive plan became legally effective in July 2018, adding stricter regulations to the approval of mining and prohibiting phosphate mining in areas that are environmentally sensitive.

“Where the alternative of clustering all structures on the non-wetland portion of a site exists, the County shall conserve wetlands by prohibiting any development, which alters the natural function of wetlands,” the policy reads.

Unable to use the property for mining, the four families that make up HPS Enterprises II sued the county. According to court records, an appraisal showed that, without the ability to mine phosphate, the property is valued at $16.92 million, compared to the value of $313.08 million if mining was allowed.

The company makes two claims in the case, citing the Harris Act and “reverse condemnation.”

The Harris Act, a state law, allows a property owner to recover money when local government regulations cause an “inordinate burden,” Hawkins said.

“Inordinate burden is essentially a defined term that means a property owner used to be allowed to do something, and now they can’t do that thing. And it’s led them to have a reduction in property value,” he said.

The second claim being made is “reverse condemnation,” which comes from the Fifth Amendment to the U.S. Constitution, Hawkins said. It states that no person should be deprived of property without due process and that private property should not be taken for public use without proper compensation.

“So essentially what they’re arguing in their reverse condemnation claim is that Union County has so significantly regulated their private property, it might as well be taken for public use,” he said.