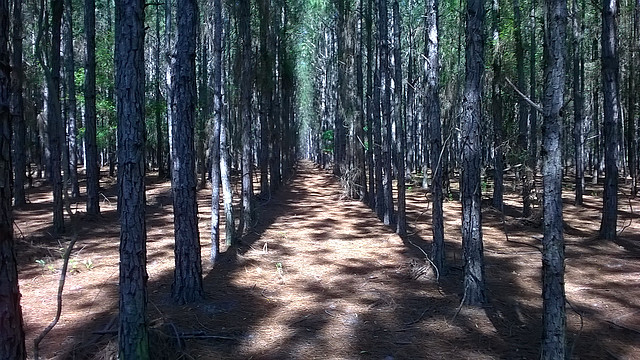 A portion of the 7,400 acres of land HPS Enterprises II has proposed to mine for phosphate. (Martin Vassolo/WUFT News)

How Does Phosphate Mining Work?

Popularly used as a chemical agent in fertilizers, phosphate is a high-demand mineral.

There are 27 phosphate mines in Florida, but only nine are currently active, according to the Florida Department of Environmental Protection. Phosphate is concentrated in Central Florida, which is called the “Bone Valley” because it derives from fossils.

Before the mining process can begin, owners must conduct wildlife surveys, relocate threatened and endangered species and clear the property.

The actual process begins with a dragline bucket, a large bucket suspended from a boom, which is big enough to hold a truck or van, according to the FDEP. This bucket scoops up the initial 15 to 30 feet of earth, called “overburden,” and dumps it in piles on the side of the mine pit.

The dragline bucket then digs out the ore-bearing layer, called the matrix. According to the FDEP, this layer is made up of phosphate rock, clay and sand.

The phosphate is then mixed with water using high-pressure water guns to create a slurry. It is then pumped to the beneficiary plant, where the phosphate is separated from the sand and clay. The leftover clay is pumped to areas known as clay settling ponds, and the sand is pumped back to the mined area to be used in land reclamation, according to the FDEP.

However, the HPS Enterprises II mine proposed a different method to mine the phosphate. In this method, according to a PowerPoint from the HPS website, there would be no clay settling ponds.

The method proposed by HPS Enterprises II would drain water from the clay as a first step, said Dennis Price, a registered professional geologist in Florida. The clay would be mixed with the waste stream of sand, which would be transferred to the pits, mixed with the overburden and placed back in the pit.

This method leaves no large settling areas of clay and water that remain for 50 to 60 years after, Price said. Instead, the land can be reclaimed much faster.

Aspects of this approach – specifically the method of draining water from the clay – have been tried before in a Hamilton County mine, Price said, but it failed.

“It became too cumbersome, and it didn’t work out, and they abandoned the idea,” he said.

Price said the HPS Enterprises II plans gloss over the issue of overburden storage because the amounts are “enormous.” If the mine cannot handle the overburden as planned, then it will not work, he said.

Price also said HPS Enterprises II’s plan only addresses effects on the surficial aquifer, ignoring the deeper effects, which could be detrimental.

“I think both overburden and the groundwater are the least explored parts of the plan and the most important,” he said.

Kelly Hayes previously reported for WUFT News.
@twitter.com/kellyrhayes
Previous Race And Equity Subcommittee Meets To Discuss The Issues Of Misrepresentation Of Minority-Owned And Women-Owned Businesses
Next The Battle of Bone Valley: Part I, The Case Tolling Florida’s Smallest County