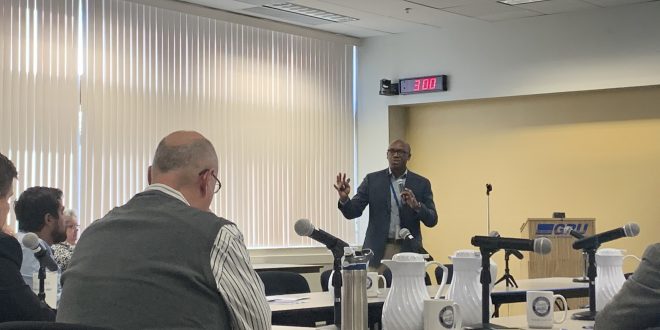 Eric Walters, Director of Business, Fuels and Power Operations for GRU, explains that every time the grid is shut down, it'll cost money. Walters explains that the minimum load of energy is typically at 130 MW and the maximum is at 420 MW. (Sofia Mingote/ WUFT News)

Gainesville Regional Utilities is looking to add a new solar plant with hopes of supporting the Gainesville City Commission’s resolution for 100% renewable energy by 2045.

GRU and the city commission met Monday evening at the GRU Administration Building Multipurpose Room to discuss the challenges and options for adding solar to the energy grid.

“The real challenge is how it fits into our current mix of energy production,” Poe said. “We’re not able to use solar when we need it the most, which is, you know, in the late afternoon, early evening when it peaks.”

GRU General Manager Edward Bielarski said energy generation must match demand, and since solar varies based on the weather, it requires backup from fossil fuels at night and during cloud cover.

He said solar power can be used as a supplement to establish power, but it is not a replacement.

“It’s probably the major misconception about solar power. Solar power is great, but you can’t substitute it for a baseload. Baseload is the power that’s there when you turn on the switch at your house, night or day,” Bielarski said.

Gainesville already has 26 megawatts of solar energy in its system. The 40 to 50-megawatt solar plant would be built by a third party because tax credits are available to income tax-paying developers, which in turn reduces the cost of the facility and costs to GRU customers.

One of GRU’s main priorities is to not increase rates for its customers, Bielarski said.

“We are one of the highest rate utilities. Part of that has been because we’re at about a 40% renewable level with the biomass plant as well as some of the solar, but we have to be careful with these next steps that we don’t impact our customers adversely,” Bielarski said.

GRU is currently in a procurement process in compliance with the state of Florida, but their legal staff is analyzing invitations by three different parties and will come back with a recommendation to build a turn-key solar plant to the city commission and Utility Advisory Board early next year.

Sofia is a reporter for WUFT News who can be reached by calling 352-392-6397 or emailing news@wuft.org.
Previous Nov. 19, 2019: Morning News In 90
Next Teacher Pay A Centerpiece Of DeSantis Budget