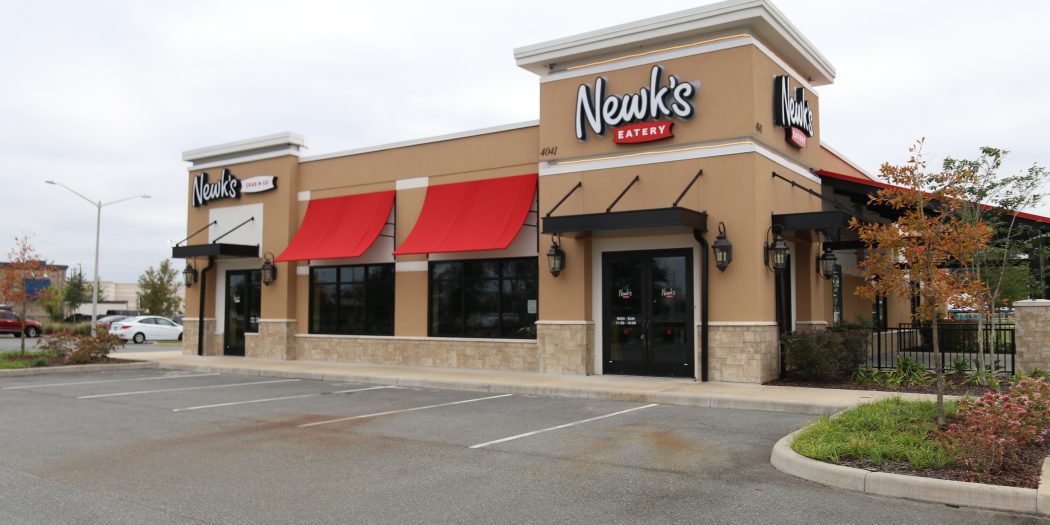 The Butler Plaza Newk's location remains surrounded by an empty parking lot. Years in the making, the location is scheduled to open to the public in January. (Zachariah Chou/WUFT News)

By Lina Ruiz and Zachariah Chou

One of Gainesville’s most delayed restaurant openings could come to fruition in early 2020.

The Butler North Newk’s location at 4041 Plaza Blvd. only shows signs of life when cars pass through its empty parking lot to reach the Culver’s restaurant next door. A look through the building’s glass windows reveals dark wooden chairs resting upside down on matching tables.

The chain, which offers sandwiches, soups and salads, is set to open on Jan. 13. For some, it has been a long time coming.

That did not happen.

In December 2017, Butler Plaza’s Facebook page made a post that mentioned the Newk’s location. A commenter on the post asked when it was scheduled to open.

Public records from the Florida Department of Business and Professional Regulation show a food license inspection for the restaurant at an undisclosed date between July 2018 and June 2019.

In November 2018, the Butler Plaza page confirmed the location would open in December.

“Originally, we’d planned to partner with a restaurant group and open as a franchise location, but that group was unfortunately unable to organize,” Newk’s Vice President of Company Operations Kevin Anderson wrote in an email to WUFT News. “As a result, the Gainesville location will now open as a company-owned restaurant.”

Mary Reichardt, the director of marketing for Butler Enterprises, declined to comment.

University of Florida economics senior Grace Ryan, 21, remembers visiting a Newk’s location in Tampa with her friends about two years ago. She said she enjoyed her time there, which is why she has been looking forward to the opening of the Gainesville location.

“I’m pretty happy and very surprised that it’s finally opening now after such a long time of it just sitting there,” Ryan said. “It’s finally opening, but I’m probably going to graduate soon — hopefully — but I’ll get a few good visits in.”

Newk’s plans to hire around 70 employees and five managers to run its first Gainesville location, according to the company.

“We’d like both the University of Florida and Gainesville communities to know we’ve recruited a quality management team to operate the restaurant and are looking forward to kicking off the new year with Newk’s newest corporate location on January 13th, 2020,” Anderson wrote.