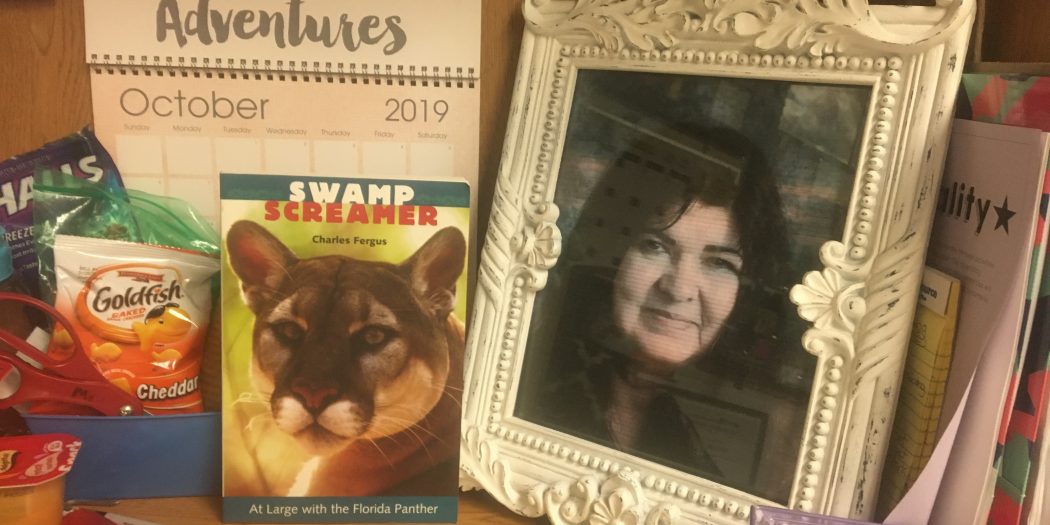 Bridgette Weeks, who worked with Leslie Williams in the media center, keeps a framed photo of her on her desk. “I get to see her every day,” she said. (Brianna Moye/WUFT News)

A Year After The Murders Of A Gainesville Woman And Her Daughter, A Resolution Remains Distant

It’s not her students’ verbal slip-ups that bother Bridgette Weeks.

Once in a while, students visiting the Stephen Foster Elementary School media center accidentally call her “Ms. Williams” instead of “Ms. Weeks.” The students are thinking of Leslie Williams, who was until a year ago a media specialist at Stephen Foster.

“Then they’ll say they’re sorry, thinking that it hurts my feelings,” Weeks said. A moment later, she burst into tears at the thought of her colleague.

On Nov. 16, 2018, Leslie and her daughter Paige, 15, were found dead in their home. According to detectives in the case, their husband and father, Paul Williams, confessed to their murders. His case has moved slowly these past 12 months in circuit criminal court, with a pending mental health evaluation that could decide whether he’s fit to stand trial.

The gruesome nature of the murders prompted a dive into Paul’s background to try to figure out what went wrong. But each new piece of information only adds to the mystery of what happened one year ago inside the Williams house.

In the year since her death, Weeks has thought often of Leslie.

How, for example, she loved Florida panthers and made sure every student who walked into the media center knew their importance.

Years before Leslie lived in Gainesville, a Florida panther attacked her cat in the backyard of her South Florida home. The wounded pet needed over a hundred stitches, but the teacher was most concerned with the fate of the panther. She knew Florida panthers were endangered, and she didn’t want any harm to come to the panther, its attack on her beloved pet notwithstanding.

It’s a story that, according to Weeks, speaks to her tremendous kindness. With her students, she focused on the good within each.

“They could come in here and yell and scream,” Weeks said, “and she would make it a task to make sure that when they left, they wanted to come back.”

When Leslie’s teenage daughter, Paige, finished each day at Buchholz High School, Leslie would bring her to the media center. Paige, an artist, would draw pictures and sometimes chat with Leslie’s co-workers, although she was shy.

Weeks recalled Paige was often picked on at school. Leslie continued to encourage and be proud of her daughter.

“‘Don’t let them get you down,’” Weeks remembers Leslie saying to Paige. “‘Go there and, you know, be the person I’ve raised you to be.’”

Weeks said Leslie often spoke about how proud she was of her older daughter, Lindsey, as well. Lindsey, 30, lives in Tallahassee and is a singer and songwriter. Leslie liked to play CDs of Lindsey’s music in the media center.

Just before the 2018 Thanksgiving break, Leslie told Weeks she wouldn’t be at work that Monday. She said her husband was having stomach problems.

Weeks said that before this incident, Leslie rarely spoke about Paul.

“He never once came to the school,” Weeks said. “Not once.”

The next day, Leslie texted Weeks. “Paul is admitted to Shands,” she wrote. “He has pancreatitis.”

“Oh no, I hope it gets better soon,” Weeks texted back. “Do you think you will be out tomorrow?”

Leslie didn’t respond, but she came to work the next day, Nov. 14.

“She just wasn’t herself,” Weeks said. “It looked like she was kind of stressed out. But, you know, she still had that smile.”

Weeks said Leslie was at work that day for an hour or two, then left because she said Paige wasn’t feeling well.

Leslie did not respond.

“I hope you’re okay,” she wrote. “We have been trying to contact you with no response. Please call the school or me.”

“You know, sometimes you have a feeling,” Weeks said. “I just had a feeling something wasn’t right.”

Later that morning, Weeks received a text from another friend.

“Have you seen the news?” the friend wrote.

“What are you talking about?” Weeks wrote back.

The house where Paul Graves Williams lived with his wife, Leslie, and daughter Paige is across the street from a swimming pool in Garrison Way, a subdivision in southwest Gainesville.

It’s an outwardly tidy single-story home with gray siding and a small porch. On the day after Weeks’ unanswered texts to Leslie, Alachua County Sheriff’s deputies responded to Weeks’ request for a well-being check and arrived to find the home’s back door ajar.

Inside, they saw a floor covered with blood.

It was the first time deputies had been called to the Williams’ address. Weeks’ request for a well-being check followed a phone conversation earlier that day between another Stephen Foster employee and Paul Williams.

During the phone call, Paul said someone should check on the house, according to the arrest report.

Paul worked as Suwannee County’s senior forester with the Florida Forest Service. He was previously a parks supervisor in Fort Pierce for 25 years. His personnel file, obtained through Florida public records law, is filled with positive performance evaluations, including one referring to him as a “stand-up guy,” and numerous thank-you notes from community members.

A string of financial problems, though, had earlier plagued the Williams family. Paul and Leslie Willliams separately filed a petition for bankruptcy in 1995 in U.S. Bankruptcy Court in Palm Beach.

Their mortgage company sued them in 2009, claiming the couple owed over $300,000 on their St. Lucie County home. The company’s lawyer later abandoned the lawsuit, and the case was dismissed.

Paul and Leslie’s homeowners association in 2014 successfully sued them for over $12,000 in unpaid assessments and other costs.

At the time, the family lived in a $330,000 home in Fort Pierce with a $297,000 mortgage, according to deed records. The homeowners association bought the home in foreclosure for $600.

According to a notice from the homeowners association’s lawyer, the Williams family was evicted from that home in January 2015.

Paige Williams was stabbed at least 35 times, according to the arrest report written by Alachua County Sheriff’s Office Detective David Visconti. Leslie Williams had also been stabbed and had suffered blunt force trauma. Both bodies had been moved and staged after death.

Paul returned to the house that afternoon. Deputies took him into custody. Once in custody, the detective said he confessed to killing Leslie and Paige.

Williams said he knew his actions were wrong, Visconti wrote, but that “it was the devil in him.”

Grand jurors in the 8th Judicial Circuit on Dec. 6 indicted Paul on two counts of first-degree murder, accusing him of killing his wife and daughter.

Now, the justice system is trying to determine if Paul even understands the allegations against him.

He will undergo a mental health evaluation to determine whether or not he is competent to stand trial.

Defendants who are declared incompetent by a mental health expert go to mental health court, where if convicted, they can be sent to treatment facilities instead of prison. If during their treatment they are found to have achieved competency, they can then stand trial in a criminal court.

Dr. Harry Krop, a forensic psychologist who also evaluated Casey Anthony and Danny Rolling — known as “the Gainesville Ripper” — has already interviewed Paul multiple times after his indictment, ultimately determining he was incompetent to go through with the proceedings of his case.

Darry Lloyd, spokesman for the 8th Judicial Circuit State Attorney’s Office, said evaluations like the one Paul will undergo are used to decide if a defendant’s mental health will keep them from proceeding in their case.

“You have to have a level of awareness in the criminal process,” he said.

Some of the factors considered in the evaluation, according to the court order, are the ability to understand possible penalties for the crime, demonstrate “appropriate courtroom behavior” and give relevant testimony.

Lloyd said the evaluation is used to prevent a situation in which a defendant is tried and convicted, then found to have mental health issues that prevented them from understanding the crime of which they were convicted.

If that happens, he said, it’s “now what? Now you have to start (a prosecution) all over again.”

The school administration has installed a plaque outside the media center. It lists Leslie’s name and the date of her death: Nov. 15, 2018. At the bottom, the plaque reads “Imagine, Inspire, Innovate.”

In the grass nearby, there is a walkway with colorful stones. They’re decorated with the thumbprints of Stephen Foster students.

The thumbprints form different shapes, like hearts, stars and suns. As Weeks explained the significance of the walkway, she bent down to tear a patch of weeds away from a stone decorated with a cat.

She keeps a framed portrait of Leslie on her desk in the media center’s office.

“I get to see her every day,” Weeks said. “I made sure that her memory is going to live on.”