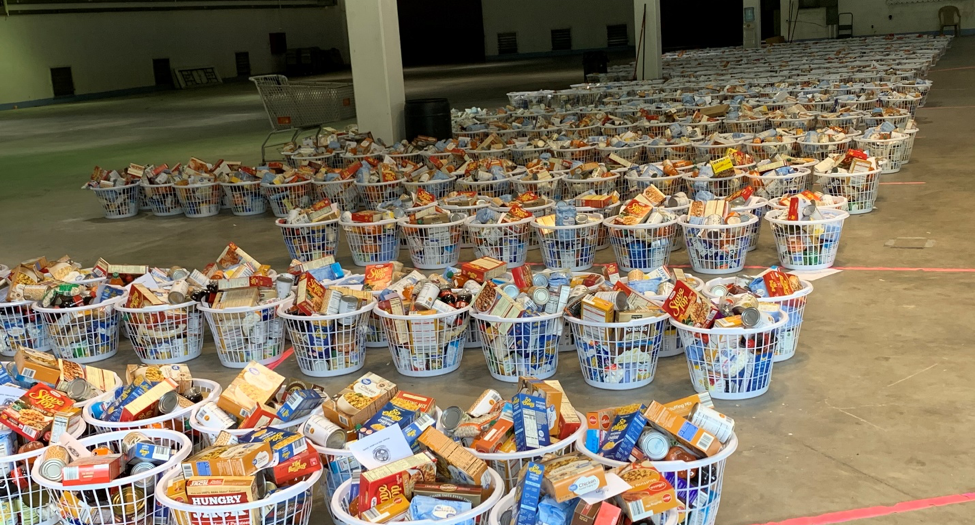 Strike Out Hunger made 625 baskets for low-income families who signed up in advance for vouchers. (Anneliese Linder/WUFT News)

‘There’s Somebody Who Needs This’: Strike Out Hunger Giveaway Serves 1,500 Families Ahead Of Thanksgiving

The recipients of Strike Out Hunger’s Thanksgiving Basket Giveaway will have one less thing to worry about during the holidays this year.

The food drive in Gainesville on Thursday provided 625 free baskets of food for low-income families, with leftover food going to the general public, too.

Anne Jones, an Air Force veteran says she just moved to Gainesville and was recently homeless.

“There was a couple of people in my situation, and we all have apartments near each other. So, we’ll be combing what we have and getting together,” Jones said.

Jones said she is grateful for the food.

“I wouldn’t have a turkey and some other things. But I would have some general things to try to get through the holidays. So, it saves me money, so I can use whatever money I have on something as opposed to purchasing stuff that’s here,” Jones said.

George Young, a retired construction worker, carries around an oxygen tank and survives on Social Security benefits. This is his second year getting a food basket.

“If it weren’t for the giveaway,” Young said, many people wouldn’t have anything.

Young said he got food items from the drive that he would not have been able to get otherwise.

Volunteers from different hunger organizations came together to sign people in and pushcarts full of baskets to the cars.

Carolyn Cleveland, a Farm Share volunteer, says many families will stretch out the food donation past Thanksgiving to last until they get more food stamps.

“All the frustrations, anything that seems like, ‘Oh, this is too much’ — that’s when you keep going. Because there is somebody out there. There’s somebody who needs this. They really need it,” Cleveland said.

Rodney Long, president of the Long Foundation, says around 1,500 individual families were served during the giveaway.

Anneliese is a reporter for WUFT News who can be reached by calling 352-392-6397 or emailing news@wuft.org.
Previous Nov. 14, 2019: Afternoon News In 90
Next General Policy Committee Discusses Options For Filling Shuttered Gainesville Job Corps Center’s Void