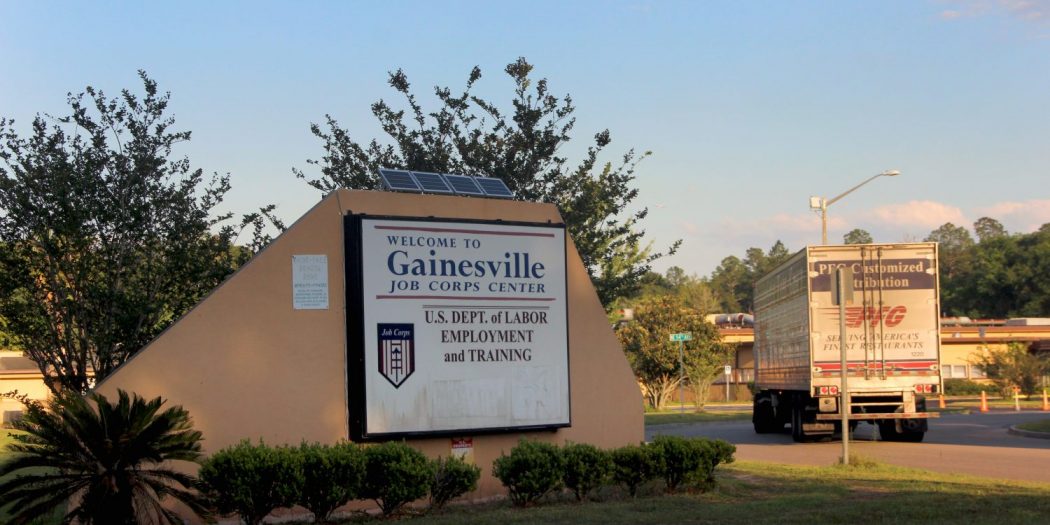 After months of questions about its future, it's now clear the U.S. Department of Labor will never reopen the Gainesville Job Corps Center. The city is now looking for ways to fill its void. (John Lievonen/WUFT News file photo)

The center became inactive in September 2017 after Hurricane Irma caused severe damage including flooding and the invasion of contaminated soil onto the property and into buildings.

The center has been a part of the Gainesville community for over 40 years and a major employer for East Gainesville residents. The center’s closure led to the firing of 125 staff members.

Gainesville was one of four U.S Department of Labor Job Corps Center in Florida. In September, the federal government officially deactivated the Gainesville center.

Poe said the purpose of the meeting was not to focus on the past, but on the potential for future use of the property and community programs.

“If Job Corps isn’t an option, we should be scaling up facilities that work and giving students access to programs that have a proven track record,” Executive Director of Project YouthBuild Jonathan Leslie said.

Poe said there is a high potential for the leaders of these already successful community programs to work together. The next step is getting more organizations involved and submitting proposals on how they could also participate in a job training, leadership skills development and community center.

City Commissioner Helen Warren agreed, adding that she believes the federal and state government will respond stronger when they see how many program options are available.

“I think there is a greater potential in supporting multiple locations that serve smaller groups,” Warren said.

However, the committee agreed that before any of these programs can grow in place of the Job Corps Center, the 47-acre property itself, which is currently federally owned, needs to be addressed.

“If a piece of federal property sits there with no intention, it hurts the city,” City Commissioner Harvey Ward said.

Poe said the next step is to make a request to the U.S. Department of Labor to reclaim the site and address the past and potential future environmental issues. Harry Glenn, a federal lobbyist for the city, said in the meeting it would cost around $10 million to clean up the site and $6 million to renovate its existing buildings.

The committee agreed that they won’t receive funding to accomplish any of these long-term goals without a targeted and coordinated plan. Still, they emphasized that former resources available at the Job Corps Center are not lost.

“What I saw today was a bunch of already successful organizations already serving our community if given the right location, resources and opportunities,”  Poe said. “This will not be the last time we discuss this.”

A timeline of Job Corps Center events since Hurricane Irma

Allison is a reporter for WUFT News who can be reached by calling 352-392-6397 or emailing news@wuft.org.
Previous ‘There’s Somebody Who Needs This’: Strike Out Hunger Giveaway Serves 1,500 Families Ahead Of Thanksgiving
Next State Committee Votes to Send Auditor General To Examine City Of Gainesville