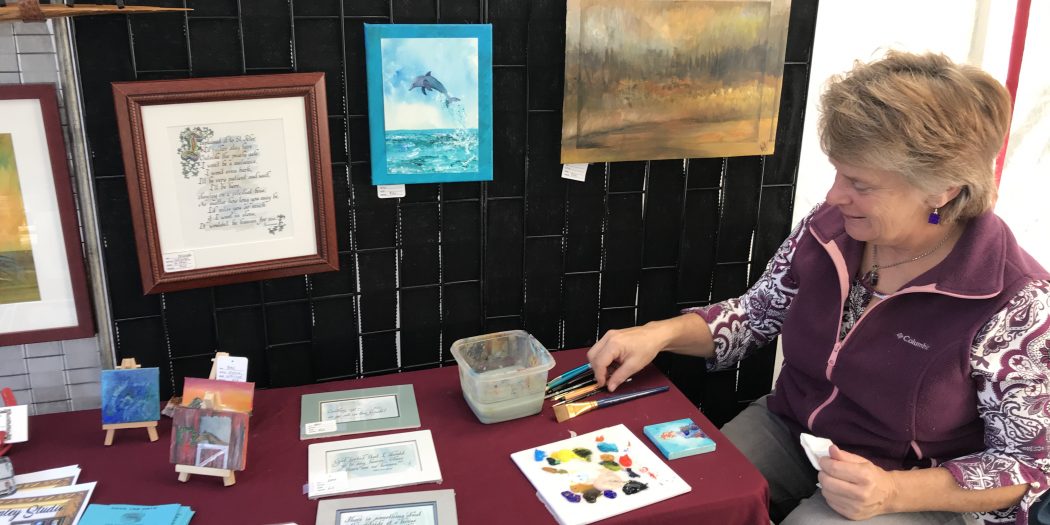 Locals and out-of-town visitors alike shuffled down Micanopy’s Cholokka Boulevard, peering every few seconds into white tented booths filled with arts and crafts. On Nov. 2 and Nov.3, a clear blue sky and a light breeze kept the weather within the cool 60s, a perfect weekend for Micanopy’s 45th Annual Fall Festival.

Micanopy is one of those rare places that have preserved its historic roots. Its antique shops draw out people from all over. The Travel Channel listed Micanopy in its top picks for antiquing in Florida. And although the town built its reputation on antiques and collectibles, the largest earning event for the town is geared toward art.

On the weekend of the festival, cars lined either side of US-441, stretching for about half a mile. Families maneuvered their strollers around the crowds while teenagers stopped to pet Cleo, an Australian Shepherd. From Christmas booths and plant nurseries to ice cream trucks and handmade jewelry, the event featured a little bit of everything, particularly art. Monica Fowler, the owner of Delectable Collectables, said it’s a joyous event, bringing about 25,000 to 30,000 people in two days.

However, on an eventless weekday in Micanopy, it’s rare to look in any one direction and see more than a handful of people. The two spaces next to The Shop, a permanent holiday store, are empty. Boarded up windows prevent passers-by from peering inside the empty space. It’s difficult for businesses to stay open, Fowler said. It’s not like getting a paycheck every two weeks. These individual proprietors must pay the expenses and payroll of their shops no matter the seasonal fluctuations.

“About 20 years ago, Micanopy rarely had a vacancy in the downtown historic district,” Fowler said.

She started her antique shop in October 1980. She’s witnessed firsthand the ebbs and flows of the business scene.

“Once people open up a store in Micanopy, they’re here for 20 to 30 years,” she said. “But right now, we’re in kind of a transition. We’ve had some shops that have been here for a while that are no longer.”

Lost Ark Antiques is a 30-year anchor in Micanopy. It’s owner, Robert Lockward, said that they’re in an up-and-down economy so people are focused on just staying afloat, but he says that business is steady. He said antique businesses are way off from what they were in the 1990s. Young people’s interests shifted away. But he thinks that it may be coming back. He has people visiting the store on the weekends, repeat customers from up north and others from out west.

“Most things with something that have age to it stick around. They’re built to last,” he said. “Good antiques will be around forever. That hasn’t changed.”

Andy Thurber, the owner of Grasshoppa Art Gallery, said he feels optimistic about the culture and the arts in Micanopy. He calls the town a “bedroom community.” People reside in Micanopy for the peace and quiet while commuting to surrounding towns like Gainesville for work.

Thurber, who moved to Micanopy two years ago, said he’s learned that antiquers used to flood into town in the 1990s. He thinks that younger generations have since shifted their interest toward the arts. Micanopy has become a photographer’s haven, he said. People visit at night to take pictures of the brick murals and the Herlong Mansion. The town itself makes a beautiful backdrop.

Kelly Harris, the owner of Coffee N Cream, said that the festival booths hide the permanent businesses there. Harris went as far as to purchase a space in front of her coffee shop so visitors could access it. And it appeared to be successful — a line of people stretched out from the shop’s front counter to the paved road in front.

It marks Bridget Hanley’s second year as a vendor. The artist from Dunnellon, Florida, enjoys the Micanopy Fall Festival because of its high-quality crafting. She said she and her fellow artists’ work fits right in. It’s a supportive community, she said. Dangling from her ears are square violet earrings she bought from her friend’s booth across the way.

Hanley said that when people come in, they respond to the art. A family who visited Hanley’s booth asked her to paint a mermaid. She used blue and purple acrylic paint on a miniature canvas, brushing orange strokes to create the mermaid’s locks. People wandered over in curiosity as she painted live.

Jacqueline Saguin is a reporter for WUFT News. Follow her at @jackiesaguin on Twitter for news updates.
@jackiesaguin
Previous The Point, Nov. 13, 2019: What It’s Like To Live On A Starting Teacher’s Salary In Alachua County
Next Nov. 13, 2019: Morning News In 90