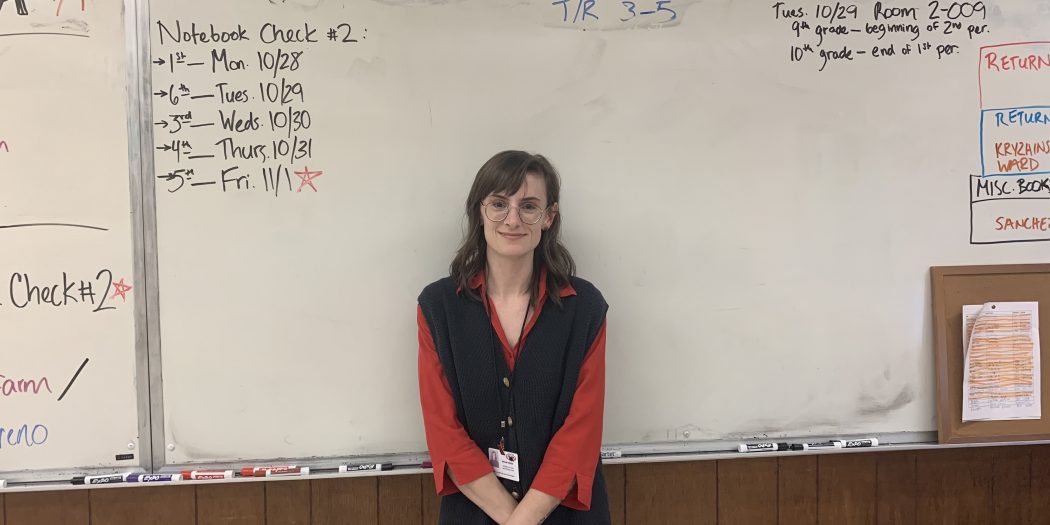 First-year English teacher Megan Weber stands in her classroom at Buchholz. Weber said she feels there are many smart people who could be successful teachers if not for the pay. (Hannah Beatty/WUFT News)

Bethany Gray isn’t sure if she has enough in her bank account to go out to eat with her roommate after a long week.

As a first-year science teacher at Kanapaha Middle School, Gray makes about $38,000 a year. She said she donates plasma twice a week and works the sporting events at school as a second source of income.

“I wouldn’t have been able to afford gas money to get to school my first month without donating plasma,” Gray said. She drives over 90 miles on a school day because living in Lake City is more affordable than Gainesville.

However, Gray may get a salary boost to help make ends meet. The Alachua County Education Association and Alachua County Public Schools reached a tentative settlement to increase salaries for teachers and educational support professionals by 2% in October. This is in addition to a 1.5% “step” increase that teachers will also receive. The settlement is not finalized until both parties vote to approve the contract.

Carmen Ward, president of the Alachua County Education Association, said the salaries particularly affect teachers who are in their first five years of teaching.

Ward said she knows beginning teachers who leave for their second or third job as soon as the school bell rings.

“It was pretty common that they had to have some other income to make ends meet,” Ward said. “It takes a long time to get to $40,000.”

Teachers and educational support professionals work on a step system, which increases salaries each year depending on level of education. A first-year teacher starts at step “zero” and goes up from there if their contract is extended.

Ward said teachers are paid for 196 days of work and seven and a half hours of work per day.

“There’s a huge problem with people leaving the profession within the first five years,” Ward said. “It is not enough money to survive on. It does not encourage people to stay in the profession.”

The tentative 2% raise in addition to a 1.5% adjustment for living wage affects teachers with bachelor’s, master’s, specialist’s and doctorate degrees.

Johnson said part of the reason why Alachua County ranks so low is because it is a property poor district.

“So much of our properties are off the tax rolls. It’s owned by the University of Florida or Santa Fe College. That property isn’t paying any taxes,” Johnson said.

Half of the money for Alachua County Public Schools comes from property taxes, Johnson said.

Johnson said the district does not track the number of new teachers who leave within five years. The teacher retention rate between 2018 and 2019 was 83%, Johnson said. This number does not distinguish why a teacher may leave from reasons ranging from retirement to hardship.

Megan Weber is a first-year English teacher at Buchholz High School with a master’s degree from the University of Florida.

She said she knew she wanted to be a teacher when she was in high school.

“The good teachers were the ones who made me, at the time, feel like a person who was capable of doing things in my own life,” Weber said.

Weber said that her life as a first-year teacher is different than others as she had financial support from her parents in undergrad and only took out loans for her master’s program. She said her loans will take about 10 years to repay. Her husband also has a job, which helps.

“I had a pretty stable upbringing, and there’s a safety net there,” Weber said. “If your life is already difficult – more difficult than a young white woman’s – it’s asking someone a lot to take on a very stressful career that doesn’t pay very much. You have to be a superhero to do that.”