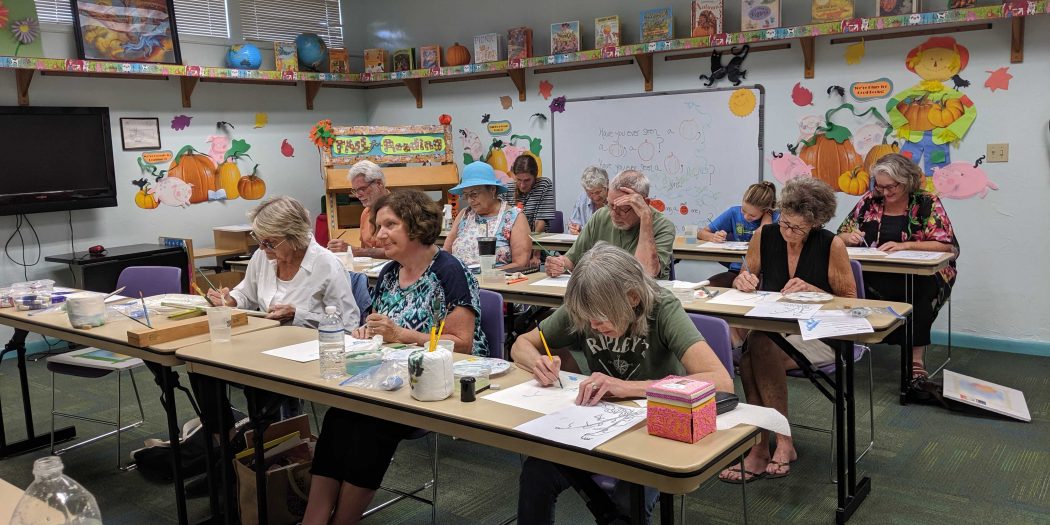 Anya Mortiz, a 56-year-old retiree, learned about color blending, layering and underpainting in the Hawthorne library’s watercolor painting class for adults. But more importantly than that, she gained a community.

Every Monday from 3 to 4:30 p.m., Cross Creek artist Judy Harris teaches a popular watercolor painting class at the Alachua County Library District’s Hawthorne branch. The classes are free, and all supplies are provided by the library. While open to adults of any age, the class is almost always entirely made up of seniors and retirees.

The social nature of Harris’ Monday afternoon art class may be one reason it’s so popular.

The 10 seats in the class are full, and there are another 12 adults on the waiting list to get in.

The greatest benefit of the class is “the camaraderie that develops,” Harris said. “People come in that are recovering from serious illness, people whose husbands are in the hospital dying, and they can come in and paint and forget everything.”

Mortiz, who recently moved to Hawthorne, said that as a new resident, the class helped her make friends in the community.

“I just moved from South Florida, so for me it’s salvation,” Moritz said. “I’m meeting new friends, and it’s giving me something to do every Monday.

“You start to know everybody who walks in the library; it opens up a whole slew of people that you’d otherwise never know,” she said. “We’ve become friends, everybody in the group.”

Establishing and maintaining friendships plays a key role in keeping older people healthy, said Dr. Benjamin A. Bensadon, a clinical associate professor at the University of Florida’s Department of Aging and Geriatric Research. Social isolation is not usually thought of as a health risk, he said, but the negative effects of spending too much time alone go beyond loneliness. For people aged 65 and older, it can lead to faster deterioration and an earlier death.

“Without engagement, you just deteriorate,” Bensadon said. “Being involved in immersion, something that’s cognitively challenging, it’s use it or lose it.”

Unfortunately, too many programs and activities for seniors focus on stereotypical activities like bingo or watching films, Bensadon said.

“In my experience, people get bored, and bingo doesn’t necessarily do it,” he said. “(The activity) has to matter to the person. The more it matters, the greater the benefit.”

Dorie Karl, 64, is one of  Harris’ watercolor students. She said this is the first art class she has taken since college, and many of her peers are in the same boat.

“There are some who are just reconnecting with their creative side, and some finding out if they even have a creative side,” Karl said. “When I took Judy’s class, I hadn’t picked up a brush in 50 years.”

The class reminds seniors that they have the ability to learn, Karl said. “It just builds our confidence and self-esteem.”

Hawthorne, which has a population of about 1,500 people, opened the Hawthorne Wellness Center, a multi-disciplinary health clinic, located at  6110 SE 205 St., in 2018. Residents age 65 and older responded to the opening immediately, and now those seniors account for the majority of the center’s clientele said Ciara Ring, a fitness instructor at the center.

The wellness center offers classes specifically for residents 65 and older. The Silver Sneakers program has about 80 seniors registered and Renew Active has about 10, Ring said, “Which for Hawthorne, that’s a huge number.”

Ring has seen clients who first met in a fitness class and now regularly have dinner together. Those friendships are the reason people keep coming back, she said.

Ring said that going to the gym isn’t always about getting into shape.

“People usually think about the physical and health benefits,” Ring said. “But I think a lot of it is the socialization aspect.”

Not all attempts to engage the town’s seniors have succeeded; a free computer class at the Hawthorne library showed promise during spring but was canceled over the summer due to a lack of interest.

However Bensadon said there is evidence that more mentally challenging activities, such as learning a new language or skill, can slow or reduce memory loss and deterioration.

“Lifelong learning is a classic model,” he said.

Cindi Dawdson, a 57-year-old retiree in Hawthorne, said she never was interested in painting when she was younger, but Harris’ watercolor class completely changed her mind.

“It was like Judy opened up a whole new world for me,” Dawdson said. “It’s like I’m a painting fool now.”

Dawdson said she appreciates all that the library has to offer aside from the watercolor class, like yoga, crocheting and knitting classes and a book club. All classes are free, and offered to adults.

“Different people like different things,” Dawdson said. “I think (the library does) a very good job as far as trying to include things for everybody.”

“I think being creative when you’re retired is important,” Hadley said. “It makes you feel worthwhile.”

“When you take art classes, you’re more you,” she said.

Julia is a reporter for WUFT News who can be reached by emailing news@wuft.org or calling 352-392-6397.
Previous Alachua County Veterans Day Celebration Honors Korean War Veterans Among Others
Next Nov. 12th, 2019: Morning News in 90