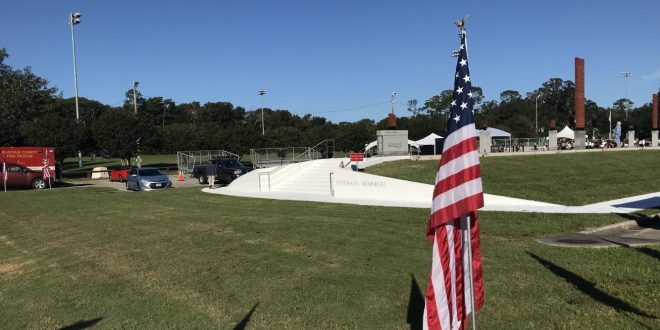 Alachua County hosted its annual Veterans Day celebration Monday morning at Veterans Memorial Park. This year, the program put a special emphasis on honoring those who served in World War II and the Korean War.

A member of the Korean War Veterans Association, Terry Fitzpatrick, felt elated to be included.

“It exposes us to the public because, for a long time, we were called ‘the forgotten war’,” Fitzpatrick said. “Even on the news media, they’d talk about the war. In different wars, they’d (talk about) World War II and Vietnam, but we’re in between that.”

Each year, the county honors different groups at the celebration.

Davis also said the activeness of Korean War veterans in the community played a part in the decision. Fitzpatrick was grateful to find men to bond with after his time serving in the war.

“You feel elated because you’re back with your buddies,” Fitzpatrick said. “You develop with other veterans friendships that can’t be compared with civilians.”

Fitzpatrick and other Korean War veterans showed off some of the gear they used in the war at the event. They took pride in making the “forgotten war” seem a little less forgotten.

Parker is a reporter for WUFT News who can be reached by calling 352-392-6397 or emailing news@wuft.org.
Previous The Point, Nov. 12, 2019: Gainesville’s Stretch Of 8th Avenue Now Has Memorial Mile Signs
Next Hawthorne Library Recreational Classes Keep Seniors Engaged