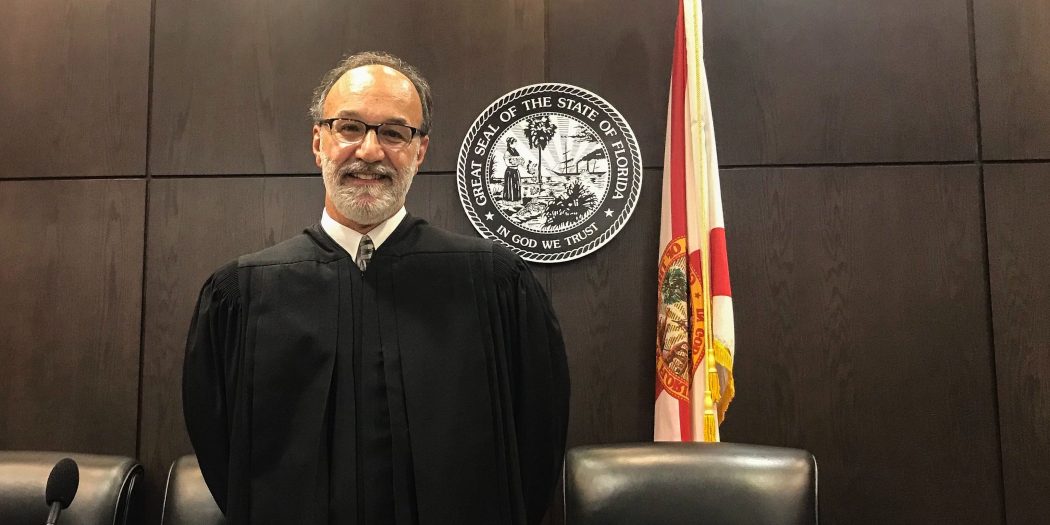 On Friday afternoon, Judge Craig C. DeThomasis had his two-hour investiture, or ceremonial signing in, at the Alachua County Criminal Justice Center. He’s been serving as a judge in the family, domestic violence, risk protection and mental health division for the Eighth Judicial Court since Aug. 29, when Gov. Ron DeSantis appointed him.

“I am thankful that the governor got me, just like my friends and my colleagues,” DeThomasis said.

About 70 people, including more than 20 judges, local elected officials and law enforcement attended the event. They praised DeThomasis’s work and spoke of fond memories, all while awarding, enrobing and welcoming him to the bench.

DeThomasis is a double Gator, graduating from the University of Florida with a finance undergraduate degree and later a juris doctorate from UF’s Levin College of Law, according to a press release. He worked as an attorney at the Eighth Judicial Circuit’s Public Defender’s office, in private practice and as an adjunct professor at Levin before being appointed.

DeThomasis, 61, joked about the shock of people seeing a criminal defense lawyer of more than 30 years becoming a judge. But he also noted the retirement age changed to 75 recently, so he has plenty of time to figure it out.

“I got quite a few years to really give it a go,” he said with a chuckle.

Chief Judge James P. Nilon presided over the investiture. He noted the great work DeThomasis has already done in his short time as a judge. Tongue in cheek, he said DeThomasis told him it isn’t quite as hard as private practice, but it’s rewarding work, nonetheless.

“Judge DeThomasis has shown a willingness to be part of the team, is hardworking and willing to get the job done,” Nilon said.

Michael Buchanan — a decades-old friend, colleague and law firm partner — said the two are polar opposites; DeThomasis grew up in New York and loves a motorcycle ride, while Buchanan came from the Panhandle and spent time in the orange groves.

He said despite differences, he learned a lot from DeThomasis. DeThomasis is the perfect judge, professionally and personally, he said. DeThomasis often showed his humility, patience and intelligence as a lawyer.

“For more than three decades I’ve watched Craig burn the midnight oil so when he walked into a courtroom, his knowledge could impress,” Buchanan said.

Buchanan said DeThomasis aspires to be a better person than the day before and hopes he will continue to do so. DeThomasis’ experience as a criminal defense lawyer will create an atmosphere of fairness and love for upholding the American legal system.

“Craig is a self-aware, extremely knowledgeable, thoughtful and caring human of the highest order,” he said. “…The bottom line is, Craig DeThomasis is up to the task of providing justice to all.”

Attorney Carl Schwait said while teaching together in the 1990s, he recalled DeThomasis came to work dressed like a cowboy.

DeThomasis has a great sense of humor but never let it dull his intelligence, Schwait said. He truly believes in his clients and the state constitution’s power to determine a person’s guilt, and it’s evident people admire him for it.

Now robed and honored, colleagues and family hope to see DeThomasis thrive in this position.

He says he’s happy to do so in a place he’s grown to love all these years.

“Does it get any better than the Eighth Circuit?” he said.

Dana is a reporter for WUFT News who can be reached by calling 352-392-6397 or emailing news@wuft.org.
Previous City, County Leaders Spar Over Celebration Pointe As Possible Sports Arena Location
Next Marion County Requests $750,000 For State Veterans’ Nursing home