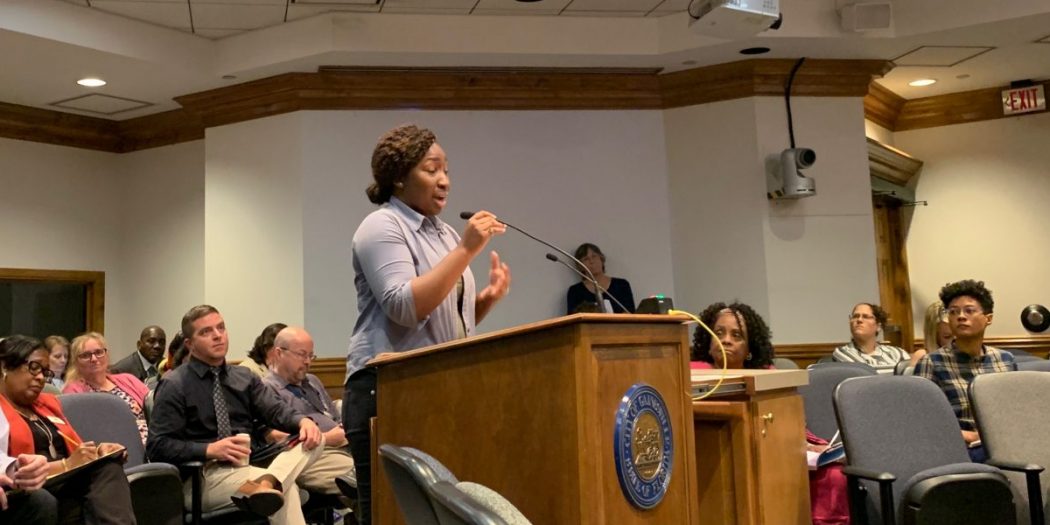 Jessica Turner tells the members of the city commission and school board that they need to help the small community organizations as well as big ones. (Andrea Giraldo/WUFT News)

In a joint meeting Wednesday between the Gainesville City Commission and the Alachua County School Board, the elected officials called for actions.

Eleven of them gathered at the City Hall auditorium, six with the city and five with the school board. They had one goal in mind – to create a solution for racial inequity in Alachua County by creating after school and out-of-school programs.

While some of the members discussed solutions to close the gap, school board member Leanetta McNealy demanded action.

“No more words, more action,” McNealy said. “I’ve been to a lot of meetings, and I’m tired.”

Her words were met with laughs from the crowd, who agreed with her demand for quick and effective action.

The city commissioners and school board followed her advice. They passed a motion, started by Commissioner Gail Johnson and seconded by Commissioner David Arreola, to work in partnership with the community for children to reach literacy by third grade within the next five years.

The motion was unanimous.

The meeting consisted of trying to fix the issues that emerged in 2018 data from the University of Florida’s Bureau of Economic and Business Research, which found that 44.6% of Black children in Alachua County are in poverty.

Both groups expressed their excitement and hopefulness in their combined meeting, with some stating that this was the push they needed to get everything started.

Commissioner Helen Warren was one to criticize the process. She stated her excitement for the joint meeting but her also her disappointment with the lack of action.

“It’s not a high money thing, it’s just lack of communication,” Warren said in discussing why the programs were taking so long.

The commissioners and board members discussed the idea of after school and out-of-school programs that would help children with tutoring and activities. Warren proposed partnering with apartment complexes to host these activities in their recreational rooms.

Angel Londrie, the coordinator for EDEP, spoke in front of the school board and commissioners about the program and how it compared on the east and west sides of Gainesville.

“We have the means to accommodate the east side, but the problem is, they don’t stay,” Londrie said.

The statement raised concerns with the commissioners, many questioning the required fees and the available transportation for the students.

“$20 can be a lot for some families,” Commissioner Gigi Simmons responded.

The meeting concluded with a passed motion and city plans for a future general policy committee meeting, where the school board is invited to attend, as well as small organizations that are helping their community.

“We want to make sure the programming the city offers is high quality,” Mayor Lauren Poe said. “Our motion is incredibly ambitious but it’s our only goal.”

Andrea is a reporter for WUFT News who can be reached by calling 352-392-6397 or emailing news@wuft.org.
Previous Michael Reuschel Recounts The Night Of The Crime That Has Him On Trial For Attempted Murder
Next The Point, Nov. 7, 2019: On Crescent Lake, The Pursuit Of Florida’s Record-Setting Alligator