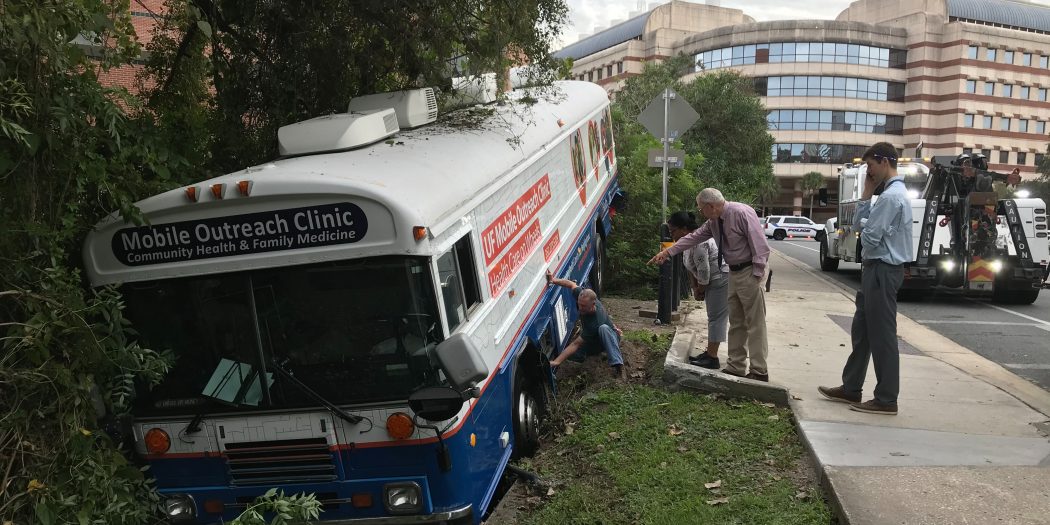 Officials examine the positioning of the UF Mobile Outreach Clinic bus after it came to a rest at the bottom of the hill on Newell Drive. (Zachariah Chou/WUFT News)

It’s never too early for a Christmas miracle.

At around 3 p.m. Monday afternoon, the UF Mobile Outreach Clinic bus was headed northbound, uphill on Newell Drive on the University of Florida campus. Before it reached the intersection at Museum Road, the bus experienced power issues and the driver, Edwin Velez, lost control of the brakes, according to Sherice Stewart, the clinic’s administrator.

As the bus began to careen backward down the hill, Velez used the bus’ horn to alert anyone who might have been in the path of the bus and attempted to steer the bus away from harm.

The bus hurtled backward, coming to a stop just over a hundred feet north of the McKnight Brain Institute. The bus’s rear hung in the air over the sidewalk while the front end was wedged into a shallow ditch by the side of the road.

There were no reported injuries.

Velez declined to comment and referred reporters to Stewart.

“Any day that you can walk away is a happy day,” Stewart said.

Gainesville Fire Rescue’s hazmat team was called to the scene to contain a diesel leak from the bus. Velez told investigators that the bus’ tank held around 30 gallons and that it was less than half full at the time of the incident.

By 5:30 p.m., a heavy-duty tow truck from Elite Towing hoisted the bus from the ditch, putting all four wheels back on the ground.

According to the UF College of Medicine website, the Mobile Outreach Clinic is a program that aims to bring health care services to low-income neighborhoods and rural areas in and around Alachua County, free of charge.

Hi everyone, Our clinic bus was in an accident today. Everyone is safe and sound! In light of these events, clinic…

Zachariah is a reporter for WUFT News who can be reached by calling 352-392-6397 or emailing news@wuft.org.
Previous Afternoon News In 90: Nov. 4, 2019
Next Medical Experts, Sheriff’s Deputy Testify As Trial Of Michael Reuschel Nears A Close