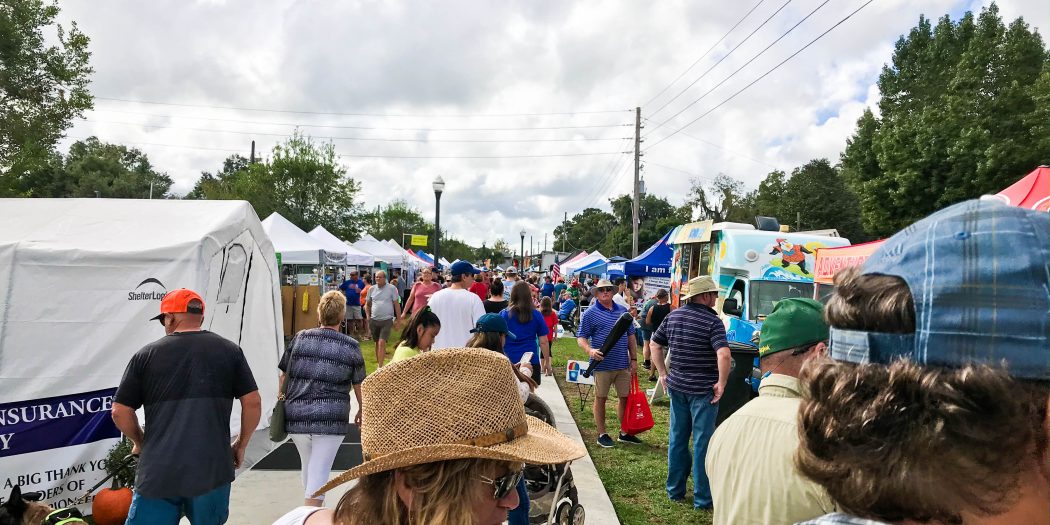 With only around 2,600 residents in the small town of Williston, the festival brings in over 8,000 attendees, nearly triple its population for the one-day event. (Carolina Watlington/WUFT News)

The debut of Williston’s Christmas Village on Dec. 7 will cost the town peanuts — literally.

“This is something we have never tried before,” Ten Broek said. “We don’t want anyone to miss out on the spirit of the season because they cannot afford to attend an event. Williston is about community.”

This year’s peanut festival was the largest in the town’s 31-year history, with 140 vendors in the half-mile space in downtown Williston and more than 8,000 attendees for the one-day event. In 1989, when the festival first began, it had only 25 vendors. The festival’s success inspired the chamber’s Christmas events committee chairman, Michael Langston, to do something different from years past, Ten Broek said.

Aside from membership dues that account for roughly 25% of the chamber’s funding, the festival makes up the other 75% of funding for the chamber’s operations and events, including the Chamber of Commerce Annual Banquet, the Starving Artists’ Showcase, the Williston Christmas parade, Light Up Williston and more.

The chamber intends to keep this year’s village a small affair with only 15 to 20 vendors and expand it next year if the community enjoys it, Ten Broek said. Vendors are being asked by the chamber not to sell anything but give away items in honor of the holiday season.

In 2001, the chamber hosted an event that brought aircraft in from across the nation, called Wings Over Williston. After the event and an unsecured bank loan, the chamber incurred a debt of $135,000.

“For the last 18 years, every board of directors since has tried to whittle away at that debt,” Ten Broek said. “For several years, the chamber could only pay the interest on the loan, and therefore, it never went down.”

When Ten Broek became the Williston Chamber of Commerce’s executive director in January 2017, the debt exceeded $55,000. As of last week, the chamber’s Wings Over Williston debt balance was $21,000. The funds from the peanut festival allowed the chamber to pay off $34,000 in three years.

The chamber hopes the Christmas Village will not cause any expenses with the help of corporate sponsors.

Though the festival is integral to the chamber’s funding, it’s about more than the money.

“The profitability from the peanut festival is not relevant to why it’s done,” Ten Broek said. “While it serves as the chamber’s only fundraiser, it is done to showcase our city and to celebrate the peanut farmer and his harvest – the reasons it was started 31 years ago.”

Ten Broek said events like the peanut festival and Christmas parade are integral to Williston’s community.

“[The peanut festival] is the biggest event of the year in this town,” said Kayla Martin, a festival volunteer and Williston resident of seven years. “It wouldn’t be Williston without it.”

According to Laura Fowler Goss, the executive director of the Florida Peanut Federation, the festival’s impact goes beyond Levy County.

“Levy County was a founding peanuts community in the state, so this festival really is significant to the region,” Goss said. “The festival takes place right at the end of the region’s peanut harvest, so it is almost like a huge party celebrating the end of the season and all of their hard work.”

Carolina Watlington is a general assignment reporter for WUFT. You can contact her at (561)-693-8751 or linawatlington@gmail.com.
Previous Bees Find Hope Against ‘Destructor’ Mites, Thanks To UF Research
Next Oct. 29, 2019: Morning News In 90