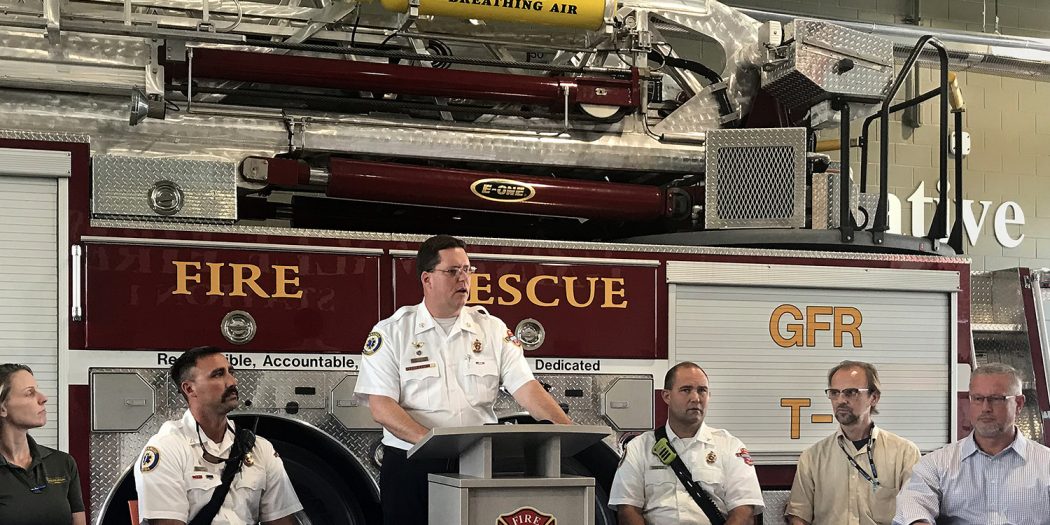 GFR officials detailed that the Gainesville Police Department assisted in the fuel fire by securing the scene and evacuating the surrounding area in case of the explosion.  Those that could not be removed were sheltered in place, Hillhouse said.

The crash occurred at 1:45 a.m. on Sunday at the intersection of Northwest 43rd Street and Northwest 16th Boulevard in Gainesville, said Hillhouse. One man was killed in the crash. The Gainesville Police Department late Tuesday afternoon identified him as Lucca Roch-Hernandez, a 20-year-old Miami native who had moved to Gainesville this fall to attend Santa Fe College. A GoFundMe has so far raised more than $32,000 to cover his family’s funeral expenses.

Hillhouse described the scene as a large Class B fire that included downed power lines laying in water.  He said firefighters hosed the tanker truck with water as a cooling operation to reduce temperatures of the fuel compartments that had not ruptured.  Once the fire was controlled, Hillhouse said the firefighters transitioned to an “offense attack” and blanketed the tanker with a foam agent supplied by an aircraft firefighting truck to smother the fire. That truck is typically stationed at the Gainesville Regional Airport.

Lt. Joel Graves, with GFR, said that a Class B fire involves flammable liquids or gases. He said the cooling method is used by water hoses to get the flames down, then foam application is used to suppress the flames.

Electricity was knocked out for many residents in the area and a nearby shopping plaza.

Tony Holstein, utility project team leader at Gainesville Regional Utilities, said it took one hour and 21 minutes to restore power to 328 customers.  Another 741 customers were able to regain power after about an hour and a half, said Holstein.  GRU restored the rest of the 345 customers in six hours.

One firefighter was injured with a soft tissue injury to the knee, but Hillhouse said he expects the injured firefighter to make a full recovery.

Hillhouse was not able to comment on who was to blame for the accident, and more information will be available as Gainesville Police Department and Gainesville Fire Rescue continue the investigation.

Cassidy Smith General Assignment Reporter for WUFT News. Contact me through email at Cassidy14@ufl.edu.
Previous Oct. 29, 2019: Afternoon News in 90
Next Trial Begins For Gainesville Man Accused Of Trying To Kill His Wife