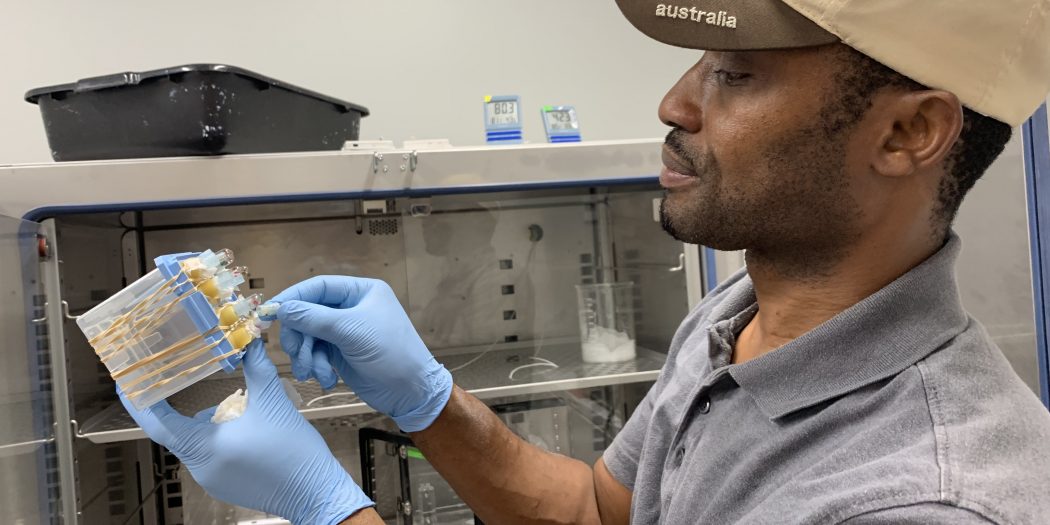 Bees Find Hope Against ‘Destructor’ Mites, Thanks To UF Research

A reddish-black mite the size of a tiny crumb latches onto a honeybee, feeding on its fat body and transmitting diseases as the bee struggles to survive.

A preliminary analysis by Bee Informed Partnership reported beekeepers in the U.S. lost a total of approximately 40.7% of their hives from April 2018 to April 2019. Postdoctoral researcher Noble Noble, with the UF Honeybee Research and Extension Lab, has made it his mission to make the Varroa destructor easier to study.

Noble starts his day by collecting bees from mite-infested hives to study in his Varroa maintenance system at the lab, a system the team began developing in 2016 and published the results of in 2018.

Using a smoker to calm the bees, Noble collects them from the hive in a mason jar with a netted cap. The bees continue to buzz away despite the killers attached to them.

The first step in Noble’s research system is his favorite method — the sugar shake. He pours a liberal amount of a powdered sugar and cornstarch mixture into the mason jar. The mixture is not harmful to either the bees or mites, but it successfully separates the mites from its hosts.

He then shakes the jar and about 60 mites fell out onto a paper towel this time.

Sixty mites is a very high count and an unfortunate sign that the hive will collapse soon.

Noble shows a bee that has lost a wing and another that appears crippled. He said this is due to the mites’ “opportunistic” behavior as they inflict wounds on the bees, then transmit viruses while they feed. The bees weaken, becoming more open to infection.

Noble then extracts bees in the pupa stage. In this part of the life cycle, the bees are alive but not moving, making it easier to study.

The mites that were freed by the sugar shake method are now manually placed onto each bee pupa. One or two mites match with each pupa and are placed into a tiny clear capsule.

The capsules are placed in a refrigerated chamber that simulates the controlled temperature and humidity of a beehive. The goal is to keep the bees alive for as long as possible, because when the bee dies, so do the mites. With the Varroa maintenance system, mites live around 10 to 30 days.

“The less mites you have, the less research you can conduct,” he said.

This is why he is developing a new in vitro system to expand the time frame of the research. The goal is to formulate an artificial diet that will keep the mites alive for longer. The mites’ food source, Noble said, is the primary factor in keeping it alive.

If Noble is successful, his research may help beehive collections close to home.

Derrick Jerome, co-owner of Hobbit Honey Apiaries in Brooksville, said the Varroa mite has been more destructive than last year. They lost 14 out of their 50 hives this October due to Varroa. In October 2018, the apiary lost just two hives and a nook.

“They are a plague,” Jerome said.

His team performs a mite check with a half cup of bees from each hive about every other month. If they count more than three mites, there is a problem.

Many mite treatments are temperature-sensitive and need to be adjusted according to the season. Jerome said they are currently using Mite Away Quick Strips and ApiGuard for treatment.

Matt Mulica, senior project manager of Keystone Policy Center, which runs the Honey Bee Health Coalition, said there are multiple resources on the organization’s website to help beekeepers learn about Varroa management, including videos and the Varroa Management Decision Tool. Treatments explained on the website range from Apivar and Apistan to essential oils.

“You’re not going to have bees if you don’t treat them,” Jerome said. “It’s like having a dog with fleas.”

Noble’s hope of getting rid of the “fleas” lies in keeping them alive for longer. The future of bees may depend on it.