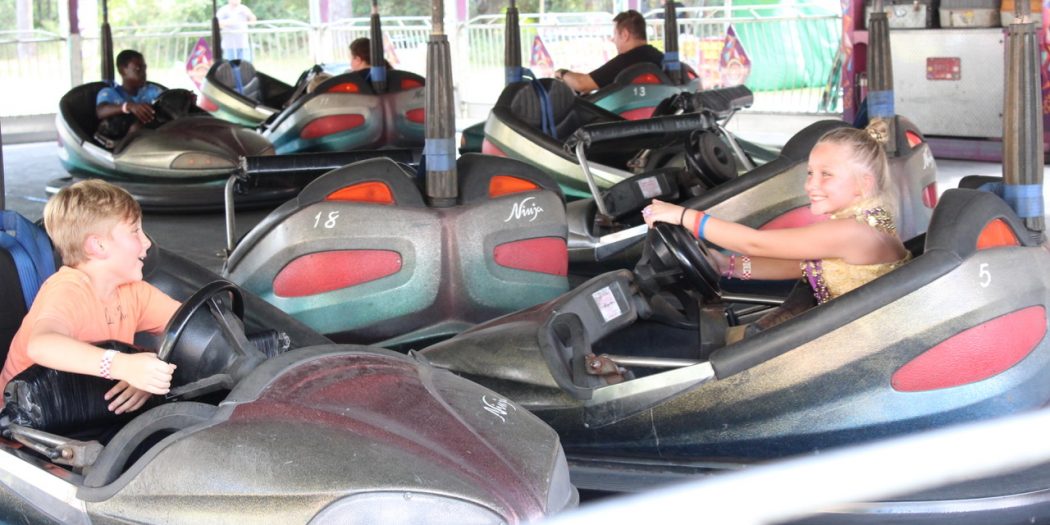 Children bump each other during a round of bumper cars at the Greater Alachua County Fair in Gainesville. (Sophie Feinberg/WUFT News)

With Traditional One In Transition, County Fair With New Name Operates In Gainesville

The scent of funnel cake swirled through the air as a symphony of screams and mechanic whirs performed in the background. Colorful rides and food booths lined the grassy field nestled between trees blocs. Children ran to and from rides, some with stuffed prizes in tow.

This was the scene at the inaugural Greater Alachua County Fair, which will remain open on the county fairgrounds area on Northeast 39th Avenue through Saturday.

The county commission voted in July 2018 to relocate the Alachua County Fair and extension services to Newberry. That fair won’t resume until the spring, however, and the county needed to clean and restore the fairgrounds when it acquired them in July.

Its initial plan was to work with the Watermelon Festival to hold a fair at Canterbury Showplace in Newberry, officials said. But the Greater Alachua County Fair opened on the fairgrounds in Gainesville with a new motto: “Same place … New Management.”

The county is operating the fair along with Belle City Amusements, the company which for decades partnered with the Alachua County Fair Association to put on the county fair each fall.

Assistant County Manager Gina Peebles said one of the reasons the county commission severed ties with the association in February is because they owed the county money. Peebles said it also damaged a youth fair podium and did not comply with animal policies set by the county.

Representatives from the association did not reply to a voicemail message from WUFT News seeking comment, though in February it disputed the county’s assertions as incorrect.

On Oct. 15, the Alachua County Fair posted on Facebook that it would not have a fall event.

“After 51 years of being a fall fair, we will be changing our dates to the spring of 2020 with a bigger better family-friendly fair,” the post said.

A promoter for the new event, Miriam White, said it is supporting such charitable organizations as Blue Knights, an international law enforcement motorcycle club, and the Gainesville Masonic Lodge. Today, there will be a food drive for Bread of the Mighty. Tuesday is Karaoke Night.

Khaliyl Adisa, 27, of Ocala, said he went to the fair on Saturday to spend time with his girlfriend’s sister and two nieces.

“My favorite part of the carnival definitely had to be the Circus Incredible,” said Adisa, a forklift operator and medical furnishings assembler.

“This is our first time in Gainesville with our outdoor show,” Simon Arestov said.

Simon Arestov added: “We have some awesome rides here, and we have our show, which I think is incredible. No pun intended.”

The traditional county fair typically draws 25,000 to 35,000 attendees each fall. White said the new fair’s organizers don’t have an idea of what turnout to expect in terms of attendance.

Those who do come should expect a good time, she said.

“I think that what people who come to fair should be looking for is having fun with their family, with their friends, enjoying the food,” White said.

Sophie is a reporter for WUFT News who can be reached by calling 352-392-6397 or emailing news@wuft.org.
Previous One Person Killed In Fiery Sunday Morning Gainesville Tanker Truck Crash
Next Gainesville Artist Honors Breast Cancer Survivors With Portrait Collection