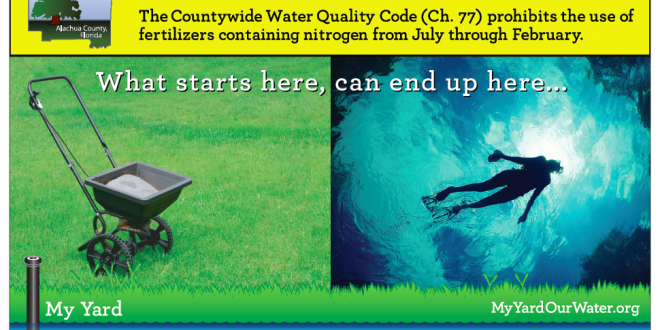 Local lawns might not look as green this fall due to an updated Alachua County fertilizer ordinance, and lawn care companies are starting to feel the effects.

The amended ordinance, which took effect on Oct. 1, implemented a seasonal ban on the use of fertilizers containing nitrogen – a main nutrient commonly used in fertilizer – from July through February. Fertilizers with phosphorus are prohibited without a proven soil deficiency, and fertilizers containing nitrogen must have a minimum of 50% slow-release components and may only be used March through June. Fertilizer may not be applied when soil is saturated or before a heavy rain in order to prevent excess nutrients from washing away or soaking into ground water supplies and springs.

The ban, amended in April, targets residential lawns and exempts commercial land such as agricultural fields and golf courses. Local lawn care companies are having to adjust their products and only fertilize seasonally to abide by the ordinance while trying to maintain lawn appearance to keep their customers happy.

The goal of the restrictions is to cut back on water pollution caused by excess nutrients, such as nitrogen, that can enter community water sources through fertilizers and cause dangerous algae blooms. Algae blooms can kill other aquatic life by releasing toxins or using up the oxygen in the water, which changes the water’s ecosystem.

However, fertilizers that aren’t restricted by the ban can come at a higher price, said Sara Heathcote, area manager for SiteOne Landscape Supply. Companies either have to absorb the cost or pass it on to their customers. The cost depends on lawn size and needs, she said.

This may mean higher prices and less green lawns for homeowners, Heathcote said.

“Lawns are not going to be as green as customers are used to,” she said. “There is going to be a sacrificing of appearance.”

In addition to aesthetic concerns, lawn care professionals are worried about more serious, unintended consequences of the ban.

While the ban prohibits lawn care companies from applying these fertilizers, it does not prevent untrained homeowners from purchasing them.

“They can still go to Home Depot and buy fertilizer with nitrogen and put it down,” Heathcote said. “This is going to increase inappropriate use of fertilizer by homeowners.”

Rusty Thompson, president of The Masters Lawn Care, said homeowners’ misuse of lawn products has always been a problem. Homeowners tend to overuse the products and end up damaging their lawns, he said.

“One of the biggest problems we see with homeowners is that they think if a little is good, then a lot is great,” he said.

This improper use of fertilizer results in excessive levels of nitrates that can seep into water supplies, which goes against the goal of the ban.

“My biggest concern is if homeowners know we’re not allowed to apply the fertilizer and are not happy with their lawn, they may decide to go do it themselves,” Thompson said.

If homeowners decide to take matters into their own hands, there may be negative implications for both the environment and local companies, he said.

Stacie Greco, Water Resources program manager for the Alachua County Environmental Protection Department, said the risk that homeowners may purchase and apply fertilizers that go against the ban is a concern. However, the county cannot prohibit the sale of these products in stores; that must be done at the state level.

John Jernigan, owner of Terra Verde Grounds Management, said he is still waiting to feel the full effects of the ban. As Florida goes into the winter months, lawns don’t experience much natural growth, which is usually when companies would apply nitrogen to stimulate growth, he said.

“Right now is not when we’re going to feel the impact,” he said. “It’s next summer.”

As the ban is new, it will take time for customers to see changes in their lawns due to lack of fertilization as the seasons change, he said.

Companies are working to provide their customers with the greenest lawns possible while abiding by the changes. For example, The Masters Lawn Care is replacing nitrogen with other nutrients, such as iron and potassium, to maintain grass quality. Thompson said this change won’t raise costs and the results will be slower but will eventually be similar.

Greco said homeowners will still be able to maintain their lawns but need to understand the effects lawn care has on the broader environment.

“We need to recognize that what we do in our landscape can impact water quality,” she said.

Educating the community so that homeowners understand the ban and its effects is key to the protection of the environment, she said. The county is working to spread awareness of the ban and its purpose through billboards, Facebook advertisements and direct mailing. The awareness efforts are funded by an education grant from the Florida Department of Environmental Protection with the goal of reducing fertilizer use, Greco said.

“It’s important to have great lawns that families want to play on, and we can do that without all these fertilizers,” Greco said. “It just might look different.”

Tatiana Sanchez, an agent at the University of Florida Institute of Food and Agricultural Science Alachua County extension office, said a collective adoption of sustainable practices for lawn care is the best way to achieve the ban’s goal.

“The ban for sure increases the awareness around this issue,” Sanchez said.

But lawn care professionals are doubtful about how much the ban will improve environmental conditions.

Alachua County previously adopted a winter ban in May 2016 that prevented fertilizer usage from November through February, Thompson said. However, nitrates continued to increase. The new ordinance extended the dates of this seasonal ban in hopes of having a greater effect.

“Either lawn fertilizer is not part of the problem or there are bigger fish to fry in creating a solution,” he said. “The problem is that science isn’t really backing the ban.”

Alachua County is the thirteenth county in Florida to implement a strict summer rainy season fertilizer application ban. Pinellas County implemented a fertilizer ban in 2010; the ordinance is a shorter seasonal ban and prohibits the use of fertilizer from June through September.

Florida counties started implementing fertilizer bans in response to a year-long red tide outbreak in 2005 and 2006, said Cris Costello, organizing manager for the Sierra Club, an environmental organization that fights to protect natural resources across the United States. Sarasota County was the first to implement such a ban in 2007.

“The ban is backed by almost 13 years of action taken by other local governments,” Costello said.

But Alachua County is the most northern county in the state with such a ban, Greco said.

“Our ban is unique,” she said.

The Alachua County ban is unique because of the months it covers, Greco said. As the most northern county with this type of ban, the area has cooler winter months when roots are not actively utilizing nutrients in addition to wet summer months when runoff and percolation are concerns, she said.

Sanchez said it will take time to know if the ban is effective. Changes in water quality over time need to be measured to tell if the ban is working, she said.

“The only way to know if the ban achieved its goal is by monitoring and testing water quality parameters from runoff coming from residential areas,” she said.

“It’s challenging to measure change at this specific scale,” she said. “Right now we don’t really have the funding to do so.”

Hanna Gibson is an environmental reporter for WUFT. She can be reached at hgibson1@ufl.edu.
Previous The Point, Oct. 28, 2019: Giant Flames Erupt From Tanker Truck After Deadly Crash In Gainesville
Next Oct. 28, 2019: Morning News In 90