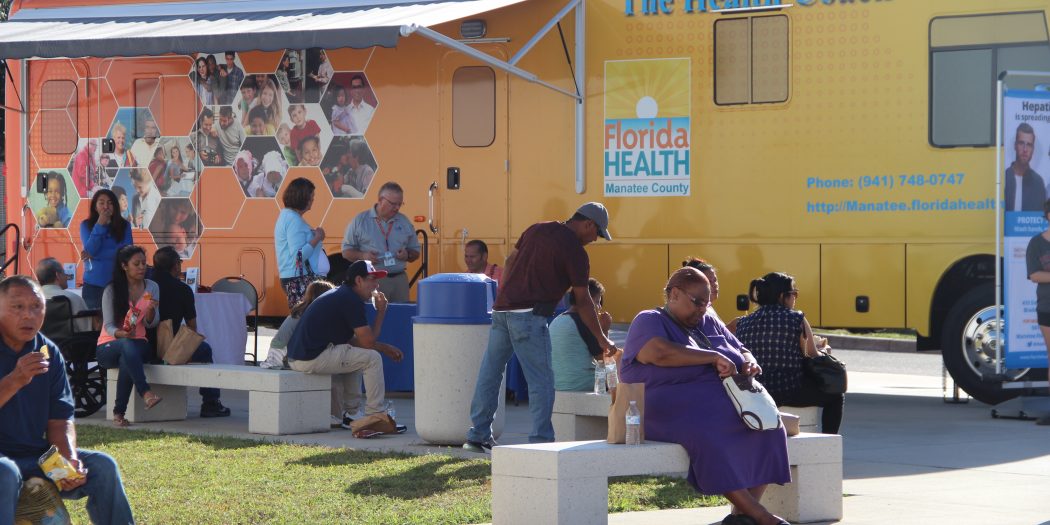 Patients in Bradenton wait outside a mobile clinic to receive Hepatitis A vaccinations. (Nushrat Nur/WUFT News)

Counties including Marion, Hernando and Citrus are tackling an outbreak of hepatitis A, which has spiked in Florida in the past year, through no-cost vaccinations and public awareness campaigns.

According to Florida Department of Health data, approximately 3,339 cases of hepatitis A were reported statewide from Jan. 1, 2018 through Oct. 12, 2019. In August, Florida Surgeon General Dr. Scott Rivkees declared the outbreak a public health emergency and urged health providers to begin more intensified efforts to screen and vaccinate the public.

Marion County has seen approximately 138 cases with three deaths since Jan. 1, 2019, said Christy Jergens, the public information officer for the county’s health department, making it sixth in the state for total number of cases. Jergens said health officials are working to get approximately 80% of the entire population vaccinated by targeting at-risk groups and sending teams to homeless shelters, jails and drug rehabilitation centers to administer vaccines at no cost.

While according to the CDC, vaccinations are the most effective way to combat the disease, public education on sanitation and general awareness about hepatitis A also play an important role. California, which declared an end to its hepatitis A outbreak on Oct. 18, 2018, attributed the state’s success to a three-pronged attack that included “vaccination, sanitation and education,” said Jorge De La Cruz, the information officer for the California Department of Health.

Grace Marketplace, a Gainesville homeless shelter on 3055 NE 28th Ave., works closely with the Alachua County Department of Health to make sure that sanitary conditions at the shelter are up to code, in addition to providing their residents vaccinations they may not otherwise have access, said Jon DeCarmine, the shelter’s executive director.

“Homeless people have increased risk for not only developing health problems from this disease, but also less access to the resources that could help treat those problems,” DeCarmine said.

Audrey Stasko, the government operations manager for the Citrus County Department of Health, said the county has sent out numerous public health alerts to its nearly 80,000 contacts through the county’s mass notification system, Alert Citrus. It informed residents of high incidence areas where epidemiology nurses would be patrolling to provide no-cost vaccines.

Terry Fleming, the co-president of the Pride Community Center of North Central Florida, says the community center is aware of the dangers the disease poses to members of the LGBTQ+ community. The center is working with the Alachua County Department of Health to offer screenings, vaccinations and raise general awareness.

Counties are also taking care to treat their inmate populations, which are another high-risk group of people throughout the state. The Hernando County Detention Center is working closely with its health department to administer vaccines to incoming inmates no later than three days after admission, said Sharon Williams, the center’s registered nurse manager.

“With close living quarters, if even one person doesn’t wash their hands, then it could pose a big problem,” Williams said.

According to the Florida Department of Health website, efforts to stop the statewide outbreak are focusing on educating people to keep their vaccinations up to date, to practice thorough hand washing because alcohol-based hand sanitizers do not kill the hepatitis A virus and to seek medical care immediately if someone develops symptoms of the disease.

The Florida Department of Health didn’t respond to repeated emails and phone requests for comment.