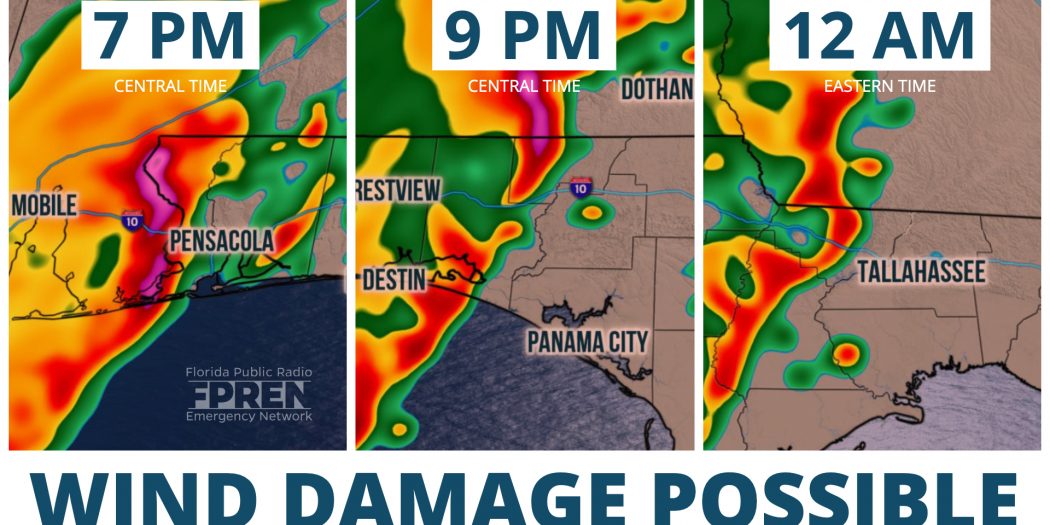 A fast-moving front will approach the Florida Panhandle Monday night, likely triggering a cluster of potentially severe thunderstorms ahead of it. The strongest cells may produce damaging winds and perhaps an isolated tornado.

Thunderstorms were ongoing across the Mid-South along the approaching the front Monday morning. The National Weather Service received more than 230 reports of large hail and high winds from the storms Sunday night in parts of Texas, Oklahoma, Arkansas, Missouri, and nearby states. At least three tornadoes, including what appeared to be a strong tornado in the Dallas, TX, also were reported Sunday evening

This line of storms is tied to a cold front moving through the lower Mississippi River Valley. An increasingly moist and unstable air mass ahead of it will spread over the Florida Panhandle this evening. Strong winds through a deep layer of the atmosphere will create an environment that is favorable for strong thunderstorms, especially after sunset. The Storm Prediction Center in Norman, OK has issued a “slight risk” for severe thunderstorms. Forecasters say scattered thunderstorms should pose a risk of damaging gusts along with a few tornadoes.

High-resolution computer models are forecasting the greatest chance of strong thunderstorms in the Pensacola, Fort Walton, Destin, and Crestview areas some time between 7 pm and 11 pm Central Time. It is possible a few isolated storms with damaging winds and tornadoes could develop along the immediate Gulf coast, west of Panama City, prior to 7 pm CT.

A broken line of showers and thunderstorms are expected to move east, reaching the Florida Big Bend and the Tallahassee areas around or just after midnight Tuesday morning, but it is not clear whether the storms will be as strong when they arrive. There is a “marginal risk” for a spotty wind damage report or brief tornado overnight into early Tuesday morning as far east as Jacksonville, Lake City, and Gainesville. At this time, it is most likely the storms will be weaker in these areas.

Additional thunderstorms are likely to develop along the cold front Tuesday morning in the Big Bend and move to North-Central and Northeast Florida during the afternoon. Gusty winds are possible with the storms, but the environment is not expected to be as favorable for damaging thunderstorms as it will be on Monday evening in the Panhandle. Scattered showers and storms are expected over central and south Florida Tuesday night into Wednesday as the front approaches and stalls there.

Much cooler and drier weather will follow the cold front, mainly north of I-4, on Wednesday.