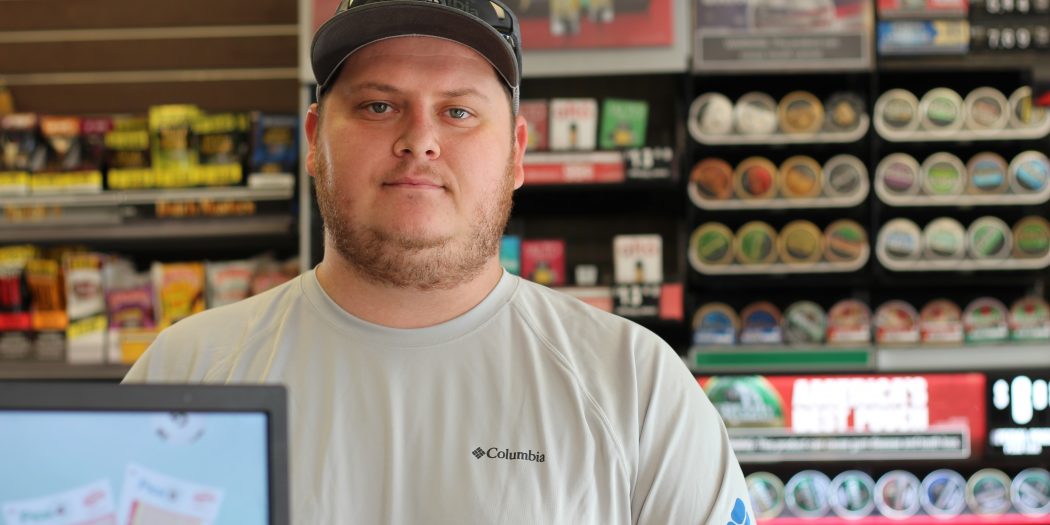 Brent Bradley, 28, of Trenton, is the manager of the Marathon gas station in Newberry. He said his business would've lost value if the city commission did not choose to opt-out of the county ordinance. (Peyton Whittington/WUFT News)

“It’s A Big Overreach Of Government”: Reactions To Newberry’s Decision To Opt Out Of County Tobacco Ordinance

Last week, customers of the Dollar General in Newberry were greeted at the register by signs warning that tobacco products would not be sold to people younger than 21, effective Oct. 22.

This week, those signs can no longer be found. On Monday, the Newberry City Commission voted unanimously to opt out of the Alachua County ordinance prohibiting the sale of tobacco products to those younger than 21.

The ordinance requires Alachua County businesses that sell tobacco products to purchase a $230 sales license annually, in addition to the $50 license fee already in place. Under the ordinance, licenses will not be granted to businesses within 1,000 feet of a public school. Existing businesses in these locations that were licensed to sell tobacco before the ordinance passes will be allowed to obtain licenses.

The commission passed its decision so close to the effective date because it was waiting to gather as much information and feedback as possible, Newberry Mayor Jordan Marlowe said.

Coleman said that because this ordinance only prohibits the sale of tobacco to those younger than 21, but does not prohibit possession of tobacco products, he believes the ordinance does nothing to keep underage persons from asking of-age people to buy tobacco products for them.

Wendy Resnick, chair of Tobacco Free Alachua, said the ordinance does not make it illegal to purchase tobacco products for people younger than 21 as it is to buy alcohol for someone younger than 21.

But that does not mean the county’s ordinance would not reduce the likelihood of younger teens getting access to tobacco products, she said.

“That’s why the raising of the age is effective; it breaks that social connection,” Resnick said.

A Florida Department of Health report revealed a 58 percent increase in e-cigarette use among high school students from 2017 to 2018. Florida Attorney General Ashley Moody cited this report in a recently published op-ed in the Miami Herald announcing that she is launching an investigation into over 20 vaping companies that conduct business in Florida. The investigation will focus on whether vaping companies target minors in their advertisements.

Support groups of the ordinance often cite the example of Needham, Massachusetts, which was the first town in the country to raise the sales age to 21 in 2005. The town reported a 48 percent drop in high school smoking rates after policy implementation, according to the Tobacco 21 website.

However, most states and localities that implemented the ordinance did so in the past two years, so research on the policy’s effectiveness is ongoing. In addition, some state laws, like Texas’, include exemptions for members of the military and preempt localities from passing their own Tobacco 21 laws, which complicates measurements of the law’s success in these states.

Marlowe said he agreed with the rest of the commissioners that the ordinance is a government overstep of the county’s authority. He said the customer bases of businesses on the edge of the county, like those in Newberry, would simply shift across the county line to buy tobacco products legally.

“If someone chooses to smoke now, they’re choosing in full knowledge that what they’re doing is harmful, just like if they buy a 64-ounce soda,” Marlowe said. “That’s what being an adult is; it’s having the option to make good decisions and bad decisions.”

He said he’d like to see the national conversation shift toward what the true age of adulthood is because different liberties are extended to 18-year-olds and 21-year-olds, respectively.

Brent Bradley, manager of the Marathon gas station on Newberry Road, was at the commission meeting when the decision was made. He said he was glad the commission voted to opt out of the ordinance and agreed with the commissioners’ stance on individual choice.

“You can go down to the voting polls and vote the commission in and out, but you can’t buy a cigar or a can of dip?” Bradley said. “It’s all about the individual’s choices on tobacco.”

Dee Armstrong, who works at the Dollar General in Newberry, said the ordinance wouldn’t have impacted the store anyway because most of its tobacco-buying clientele is older than 30.

“I think, ultimately, it’s their kids that are going to be affected by this negatively,” Hutchinson said. “It’s kind of hard to believe they didn’t see the same science we did when we made that decision.”

The Newberry City Commission did not ask Tobacco Free Alachua to present information about the ban, Resnick said.

Newberry High School Principal James Sheppard declined to comment on the commission’s decision. Jackie Johnson, Director of Communications and Community Initiatives at Alachua County Public Schools, also declined to comment, saying that the issue is between the city of Newberry and the county commission.

The Newberry City Commission will vote on an official opt-out ordinance at its next meeting on Oct. 28.

*Editor’s note: This story has been updated to correct two mentions of “Tobacco Free Florida” to “Tobacco Free Alachua,” a separate entity.