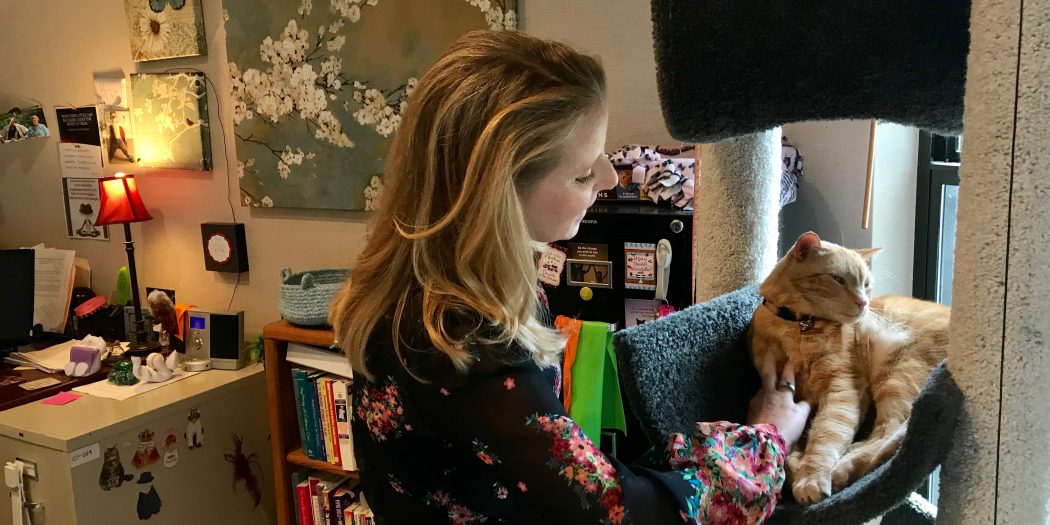 Before Junk Yard Dog came to the Child Advocacy Center in Gainesville, he often acted out and abruptly left school to escape anything that made him feel unsafe.

Now, the 12-year-old boy greets and gives tours to children who are new to the center.

Junk Yard Dog is a child abuse victim, so his real name is being withheld for safety reasons. He nicknamed himself after the WWE wrestler.

The center’s director, Sherry Kitchens, said his story resembles too many of the nearly 1,600 children it served last year. The center aims to be a child-friendly place for investigation, intervention and treatment in abuse cases.

“I get worried when I see kids that don’t have the feeling that they can survive this,” Kitchens said. “Junk Yard Dog and I connect on feeling hopeful.”

A donor recently pledged to match up to $400,000 in donations to the center’s $1.6 million capital campaign. The campaign will be used to pay its building’s final mortgage payment, which is due in January, and to maintain the 6,980-square-foot space for years to come, Kitchens said. The donor asked to remain anonymous, she said.

Kitchens has directed the center since 2005, when its budget was $200,000 and only 260 children were served. Last year, the center served 1,598 children. Its budget this year exceeds $1 million.

A child abuse victim herself, Kitchens, 48, understands feeling like there is no one to talk to about your trauma: “This is where I should have been brought to, but there wasn’t a place like that in the ‘80s.”

In 2008, flooding crumbled the foundation of the center’s building on Waldo Road by the Gainesville Regional Airport, and it moved to a space at 901 NW 8th Ave. The former building had been donated, so it was the first time the center had to pay rent.

“I started hiring more people, and we were doubling up in offices and stacking file cabinets as high as the walls,” Kitchens said. “But the space was too confined. We had to get out of there.”

In 2017, the center moved to its current location at 500 E. University Ave. When the center issued a plea that year for funds for a down payment on the mortgage, Kitchens said, the community “came out in force.”

Originally, the center only provided help for children who were sexually abused, but in 2005 Kitchens “set out to make sure the center was available for every abused child who needs it.” She expanded its services to include physical, emotional and other types of abuse cases.

A key component of the center is a room in which trained professionals interview child victims. That space is filled with toys and a camera in the wall, and a team of law enforcement representatives, therapists and others listen and observe from an adjacent room. The center also helps caregivers deal with their child’s responses to the trauma.

Partnership for Strong Families is a child welfare organization working to protect children from abuse. The agency refers abuse victims who need a specialized type of evaluation to the center.

The partnership’s CEO, Stephen Pennypacker, stressed the importance of having the center’s space to limit the number of times a victim needs to be interviewed.

“The less times the child has to tell their story, the less you re-traumatize them by having to relive it,” said Pennypacker, who has more than 20 years of experience working in child welfare as an attorney and program administrator.

When Kitchens was hired, the center had only one therapist, who worked part time. Now it has eight therapists, and children may come for counseling for as long as needed – free of charge.

“It was always a struggle to find the money to keep it going and hire more case workers and psychologists for the children,” said DeeDee Smith, 66, of Gainesville, who was a member of the board of directors that hired Kitchens. “These are people Sherry now has.”

Smith was the first director when the center was founded in 1998 and is now a board member emeritus. Smith attributes the increasing number of children the center helps to wider social awareness of abuse, in addition to the center’s growth in productivity.

Gainesville attorney Chic Holden, 79, said he assisted in securing the $400,000 matching donation. Himself one of the center’s longtime donors, Holden said the center’s physical structure provides a private and safe space for handling child abuse cases.

“When you get law enforcement and state agencies involved, it can be very debilitating for children,” he said. “This facility is better off for the people they deal with on a daily basis.”

Real estate agent Jeff Quigley, 49, of Gainesville, is the president of the center’s board of directors. “Absolutely spectacular” is how he described the $400,000 donation.

A percentage of the capital campaign funds will be used for reimbursement grants to increase staff and provide more services, Quigley said.

“The money from this campaign will allow us to have a safe and comfortable place where children will be able to heal and learn,” he said.

Molly is a reporter for WUFT News who can be reached by calling 352-392-6397 or emailing news@wuft.org.
Previous Details Emerge In Officer’s Accidental Shooting In School Cafeteria
Next The Point, Oct. 21, 2019: From Child Abuse Victim To An Advocate For Others