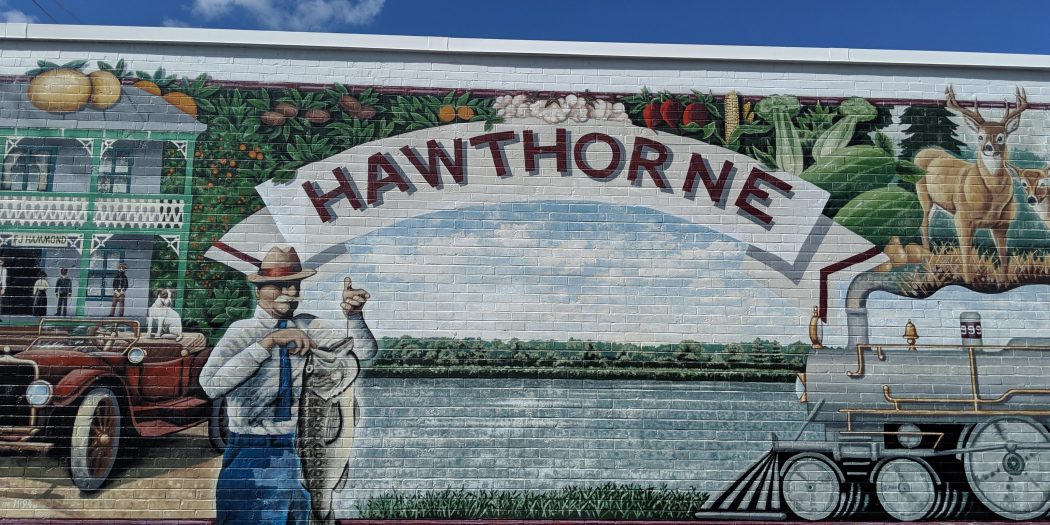 A mural on the side of the town hall representing Hawthorne’s agricultural and sporting history. (Julia Grady-Weil/WUFT News)

Hawthorne Climbs Back With $27 Million Makeover

At first glance, it’s easy to miss that Hawthorne has recently had an economic makeover. An expensive one.

That makeover is the culmination of nearly $30 million in federal, state and local government spending.

But city officials and residents both said Hawthorne has put that money to good use, including an updated water system, a new fire station, dramatically improved park facilities, a new downtown road and a popular wellness center.

Ten years ago, Hawthorne was nearly bankrupt. The town had almost no money, no income and crumbling infrastructure that had not been updated in decades.

These days, however, the town’s fortunes seem to be improving. Between 2013 and 2017, the percentage of residents with incomes below the poverty line dropped from 41% to 29%, and the population increased from about 1,500 residents to almost 1,900 residents, according to the U.S. Census Bureau’s American Community Survey.

“Things are going really well around here. I can see things growing, and it’s good for business,” said Karen Bristow, co-owner of Hawthorne Ace Hardware. “Back in ‘08, it was kind of scary for a while, but it’s really improving.”

Robert Bristow, Karen Bristow’s husband and co-owner of Hawthorne Ace Hardware, said the town has gone through a lot of change, and he heard there is a lot more change coming.

“I like to see this instead of letting it run down — them fixing it up,” he said.

Hawthorne Mayor Matt Surrency said the key to getting support from the state for a town with only 1,800 residents is many small, targeted grants.

“Through grants, the state has invested about $27 million in infrastructure and the community,” Surrency said.

State facade grants, rural business development grants, economic development resource grants and community redevelopment grants all have gone into sprucing up the town. Around $13 million has come from private sources and the commission’s budget; however, without state funds, none of the renovations and projects would have been possible.

For instance, the town spent more than $1.5 million updating Hawthorne’s water lines and replacing the town’s water tower from the 1920s.

Another $800,000 went to relocating and renovating the fire department. The station is now a sturdy brick building located five miles closer to town with hurricane-proof windows and a backup generator instead of a double-wide mobile home.

Ray Cantley, who has lived in Hawthorne for more than 30 years, said he appreciated the park renovations in particular.

“They’ve done a bunch of good work out at the park,” said Cantley. “They’re doing stuff to help people — for the kids and for the families.”

These and other projects, like renovating facilities and trails at the Little Orange Creek Nature Park and building a new wellness center, represent phases one and two of the town’s improvements, Surrency said.

What will come next is far bigger.

In 2015, the town annexed more than 1,300 acres of Plum Creek Land Company property.

The city commission and Plum Creek Timber Company plan to use this land for commercial and light industrial enterprises, which are projected to create more than 3,000 jobs, largely related to research and development within the light industrial section and land development, as well as nearby railroad and highway infrastructure.

Surrency said he expects developers to build about 800 homes in the area, doubling the number of households in Hawthorne.

The town is currently working on getting utilities out to the area so the economic development process can truly start.

“It’s the chicken and the egg,” Surrency said. “There’s no economic development until we get utilities out there and vice versa.”

This development depends on the town qualifying for a Florida Job Growth Grant from the Florida Department of Economic Opportunity.

“If we get this grant, it’ll put us over the top, let us become more self-sustaining and not make us go after grants all the time,” Surrency said.

Garrett Cassels, who has lived in Hawthorne his entire life, said he wants Hawthorne to draw more visitors and thinks with the way things are going, it might be possible.

“It’s gonna be a great town once they get everything done,” said Cassels. “It needs to be one of those small towns where everybody stops at.”

*Editor’s note: This story has been updated to more accurately reflect the $27 million upgrades to the city of Hawthorne were not solely from the state of Florida, but from a variety of sources including federal, state, county and city funds as well as private investment.

Julia is a reporter for WUFT News who can be reached by emailing news@wuft.org or calling 352-392-6397.
Previous Chances of Tropical Development Increasing Over the Gulf of Mexico
Next Former Cop Opens Hemp Shop In Chiefland