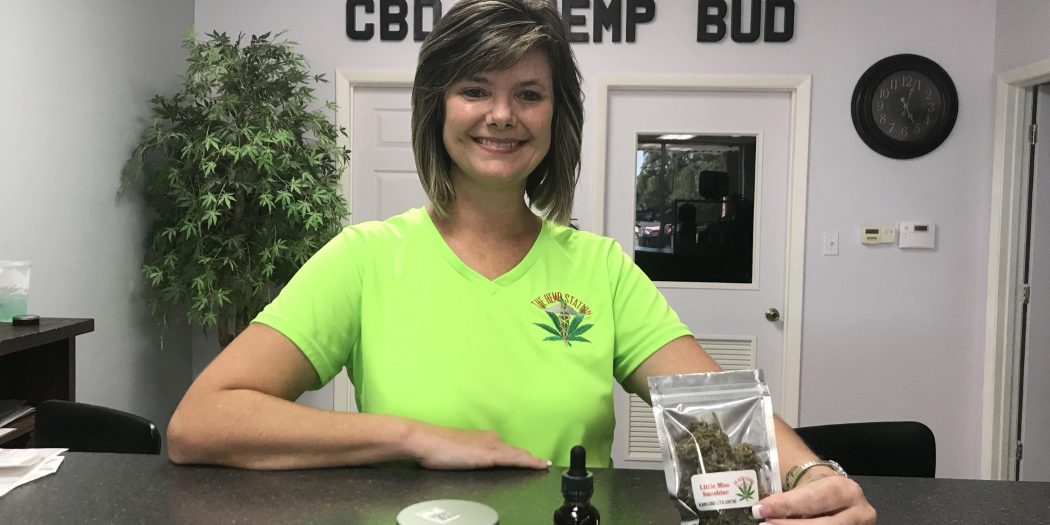 Ella Anderson, 44, poses inside her store, The Hemp Station, with multiple hemp and CBD products – some of which she uses personally. (Jake Dima/WUFT News)

In September, Anderson and husband, Scott Anderson, opened The Hemp Station, a store whose glass cases are lined with products visually indistinguishable from marijuana – a schedule I drug that used to earn Anderson’s arrestees a pair of handcuffs. The Andersons call their business venture “a dream come true.”

Levy County law enforcement officials, however, said the opening of a store selling legal products that so closely resemble marijuana, at least on the surface, is more like a bad dream.

For many deputies, it may take a lot more work to determine what’s legal and what’s not, given that many hemp products look and smell like marijuana, said Scott Tummond, the public information officer for the Levy County Sheriff’s Office.

“It’s challenged our deputies to be a little more thorough on their roadside investigations when they’re finding something that, at face value, they can’t distinguish between hemp and marijuana, but that is making them become better investigators and better interviewers,” Tummond said.

Tummond said his deputies are up for the task, but he’s encouraging hemp users to keep their wits about them. He said investigators will be looking for packaging showing that what the person has is a legal, hemp-based product, and removing hemp products from their commercial bags might be a bad idea.

“They should leave it in the original packaging it came in from the store,” he said, adding that hemp buyers could demonstrate that the products are legal by keeping the store receipts.

Hemp – a derivative of marijuana – can contain no more than 0.3% THC, the chemical that produces marijuana’s “high.” Proponents say hemp use has numerous health benefits. Anderson even uses it herself.

The Hemp Station’s clients have given “100% positive feedback” on the store’s products, Anderson said. When the store first opened, the former officer and her family gave away products to allow customers to test their effectiveness, and many have returned for more.

Scott Anderson said the giveaways gave people the chance to see if The Hemp Station’s products could help them.

“We’re not here to get rich; we’re trying to help people,” he said.

The legal sale of hemp products, however, is making life more complicated for law enforcement officers. Tummond said the State Attorney’s Office has encouraged law enforcement agencies across Florida, including LSCO, to defer prosecution of minor marijuana offenses. Nonetheless, officers still can seize products they deem suspicious, and it’s up to an individual office to decide on charges, he said.

LSCO still has the power to charge people with marijuana possession, and they’re not backing down, he said.

Ray Mazzie, executive director for the Hemp Industries Association of Florida, said hemp and CBD, short for cannabinoids, can be useful additions to anyone’s medical cabinet.

“I think it’s great to see private entrepreneurs take an active role in the hemp industry,” Mazzie said. “It is the early adopters that will help pave the way for hemp’s commercialization and normalization here in Florida. I look forward to seeing [The Hemp Station] operate and wish the owner the best of luck.”

Mazzie’s organization travels across Florida to promote the hemp industry. Florida hemp activists have been encouraged since the state legislature legalized
distribution of the crop in May.

To Mazzie and others, hemp isn’t just a medicinal product; it’s a cash crop that’s especially well-suited for the Sunshine State.

“Agriculture is Florida’s second largest economic driver, and hemp happens to be the most profitable crop on the market at this stage in the game,” he said. “Florida is uniquely situated for hemp,” Mazzie said, “because of the hours of daylight we receive year-round, abundance of water at our disposable, the sheer amount of land.”

Streenstra said that hemp could even replace cotton as a fibrous material; he called cotton production “unsustainable,” due to its “excessive” water and energy use. His organization is currently spearheading a federal bill called the Hemp For Victory Act.

There’s only one problem: hemp is legal and marijuana is not, and differentiating between the two is costly and time consuming, Tummond said. Sending suspected pot to the lab is only cost effective if there’s a lot of it.

Tummond said he did not know exactly what these lab tests cost or how long they take to complete.

“Trafficking amounts” – enough to be measured by the pound – are more likely to be sent to a lab for testing than is a small amount of marijuana, such as someone might have for personal use, he said. But if LCSO can’t tell what it is for certain, they will seize it regardless of the amount.

Despite her background in law enforcement, Ella Anderson said she doesn’t have a problem with the conundrum surrounding hemp and marijuana.

In fact, she likes both products, and added, “When they do legalize marijuana we’ll sell that, too.”

In her career, Anderson said, marijuana use wasn’t usually associated with violent crime.

“I’ve never been to a shooting where someone was high on pot,” she said.