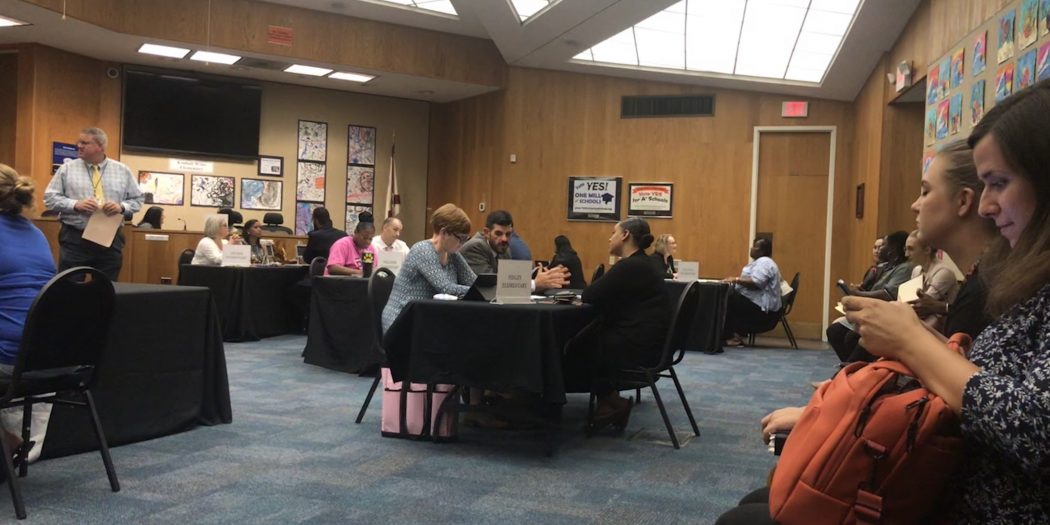 Over 65 applicants came to the Alachua County paraprofessional job fair. Many applicants interviewed with several different schools, and interviews were going on until the last minute of the event. (Sarah DeVoe/WUFT News)

People of all different races, ages and genders were lined up outside of the building and seated inside. Tables were set up so applicants could sit down with different school principals and be interviewed one-on-one. There were so many people, once an applicant interviewed with one school, they were asked to leave and wait in line again for interviews with additional schools. This helped circulate people through the process so more could be interviewed.

Jackie Johnson, spokeswoman for Alachua County Public Schools, said that the Alachua County School Board had job fairs in the past, but they weren’t necessarily focused on a specific job.

For the past two years, the Alachua County School Board has held job fair events in many specific categories to help expand recruiting efforts. Johnson said this is more of an effort to target particular groups to peak interest. People are more inclined to go to a specialized job fair. The specialized job fairs aren’t necessarily based on need, Johnson said.

Clarke said there’s always a need for paraprofessionals. Paraprofessionals serve different roles within schools, whether they help in general classroom settings, are assigned to different students or help outside the classroom.

“We’re always hiring paraprofessionals all throughout the year,” Clarke said.

The paraprofessional job fair provided applicants potential interviews with principals from 12 Alachua County schools. Most of the schools were elementary with one exception of a middle school. The schools did, however, vary in the state grades they recently earned.

Clarke said that all schools, from elementary to high school, from A grade to F grade, get great value and help from paraprofessionals.

“It just depends on what the needs of the students are,” Clarke said.

“You can always use the assistance,” Robbins said.

Because of the turnout of applicants, Clarke said she felt there was a good possibility that all the paraprofessional jobs being offered would be filled.

“We just try to recruit the best and brightest talent for our students,” Clarke said.

Sarah is a reporter for WUFT News who can be reached by calling 352-392-6397 or emailing news@wuft.org.
Previous Sheriff: Officer Whose Gun Fired In School Cafeteria Fired For Mishandling Pistol
Next The Point, Oct. 17, 2019: Sheriff’s Deputy Fired Months After His Gun Went Off In A Florida School Cafeteria