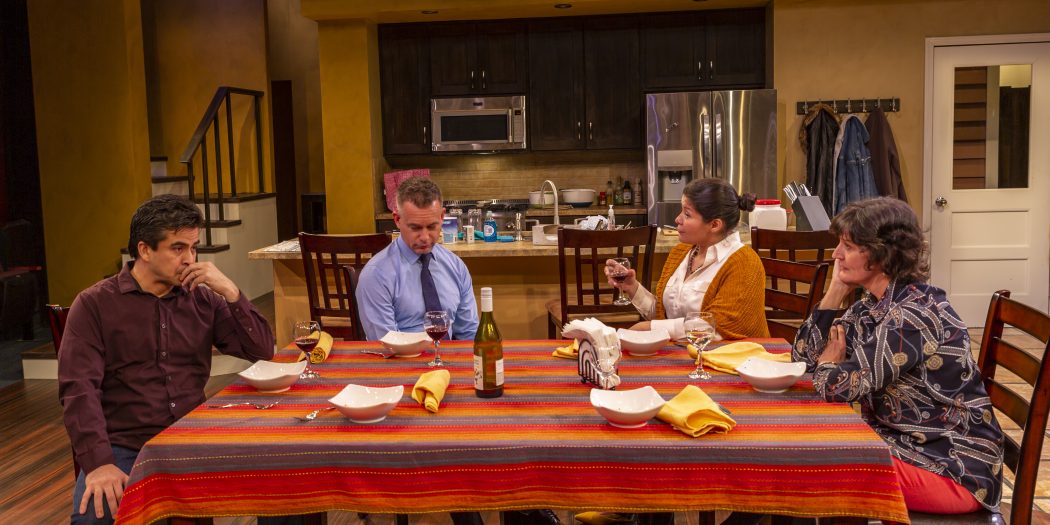 It’s two minutes before the final dress rehearsal for a new play called “The Blameless” – and Stephanie Lynge can’t find the cilantro.

Lynge stands at the front of the stage set at the Hippodrome Theatre in Gainesville: A slightly messy kitchen with a dinner table, coat rack, banister, family photos and entrance door.

“The cilantro is key,” she said jokingly, as purple-blue hue stage lights cloaked the theater. “This play is basically about a family making dinner, eating it and cleaning it up.”

“The Blameless” is definitely about more than just making dinner. Written by Nick Gandiello, it takes place a year after the Garcia family’s son, Jesse, died in a shooting on a college campus. The play follows the family as they have the shooter’s father over for dinner.

“It’s about how the survivors survive,” said Lynge, 41, the Hippodrome’s artistic director.

“The Blameless” opened on Friday and runs through Nov. 3.

It is one of eight productions comprising the theater’s 2019-20 season. The season’s theme is Breaking Boundaries, with the goal of having theatergoers see the world through someone else’s eyes and encouraging community connections, Lynge said.

She said the cast and crew talked with Gandiello, a playwriter and screenwriter based in New York, throughout the development of the second-ever production of “The Blameless” – the first being at the San Diego Old Globe in 2017. Lynge said they made the decision to include it in the season after the mass shooting at Marjory Stoneman Douglas High School in February 2018.

“It felt like a way we could talk about what’s happening,” Lynge said.

The impact of gun violence might be weighty, but “The Blameless” has a more universal message, said Jesse Desrosiers, 22, assistant to the artistic director at the Hippodrome.

“We’re not trying to take a side in the gun debate,” Desrosiers said. “We are trying to open an opportunity to just have a discussion about it.”

The Hippodrome invited over 100 local high school students to see “The Blameless” as a part of what it calls an observership program, Desrosiers said. The program is tailored to every production and gives students a behind-the-scenes look at the theater. For the new play, students listened to presentations and discussed mental health, gun violence and restorative justice.

Gretchen Casey, a restorative justice advocate, and mental health specialist Rachel Morris have been invited to speak after the Oct. 26 and Nov. 2 performances, respectively, Desrosiers said.

Lynge said the arts not only create space for conversation but also for empathy and healing.

“The amazing thing about live theater is that it’s a community experience,” Lynge said.

Brittany Filer, 29, of Gainesville, was impressed after seeing a preview performance with her mother Nancy Filer, 61, last week.

“This is real,” said Brittany Filer, who has an aunt who works as a mental health counselor. “There are families that have actually gone through this experience and are still coping.”

Programs like the Power of Art at the Coral Springs Museum of Art in Broward County are intended to show just how real the healing process can be. Julia Andrews, the museum’s director, said that program is an extension of the Healing with Art initiative that began almost five years ago as an outlet for veterans with PTSD to cope through art.

Following the shooting at Marjory Stoneman Douglas, Andrews said, the museum transformed into a crisis center for those seeking support and counseling. After offering these services for three weeks, she said, the museum decided to continue the program.

“They form a community,” Andrews said. “There is a trust that comes out of being with people who have experienced something similar to what you have.”

Lynge said the same when talking about “The Blameless.”

“It’s a very powerful story,” Lynge said. “It’s even more powerful when the community is involved.” 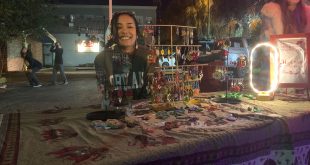 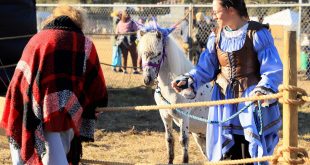