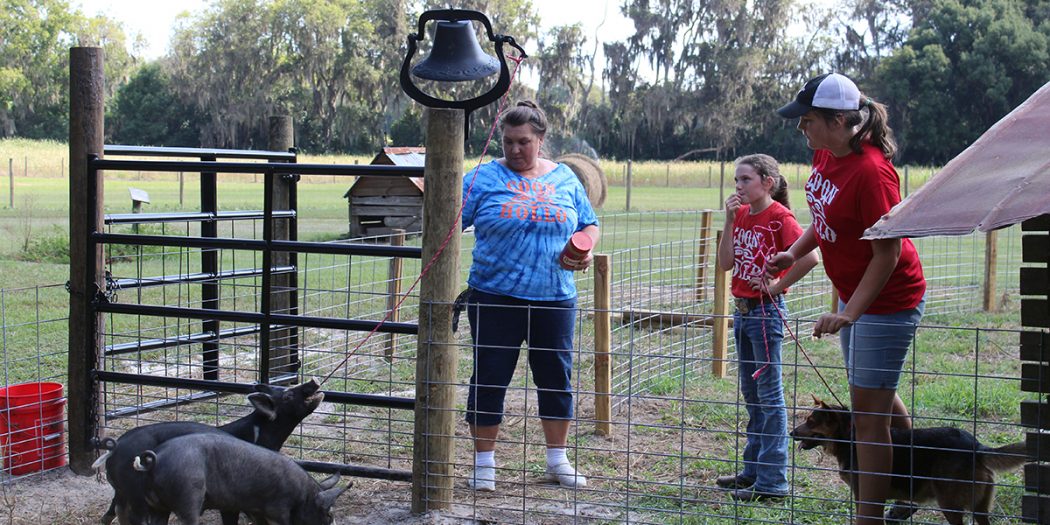 If you want to have a son, don’t drink the water at Coon Hollo.

At least, that’s what Laurie Berry says. She’s the oldest of three daughters in the Williams family and part of five generations of Williams that have lived and worked on Coon Hollo farm since the early 1940s. Amy Perryman, the youngest Williams sister, and her husband, David, are now the owners and managers of the Micanopy farm.

Perryman’s three daughters — 16-year-old Ashtyn, 13-year-old Abree and 11-year-old Ada — along with her sister, Berry, all dressed in Coon Hollo t-shirts work in the 90-degree heat on a late September afternoon. They fixed wooden tables, put out centerpieces and painted chairs. The family’s 10-month-old Labrador Mastiff, Ryder, lay in the shade with peanut butter tufted in his fur from pig race training.

Ginny Williams — “Nana,” as she’s known to the family — sells hundreds of jars of jam and honey each year. Jack Williams — “Papa” — continues to plant crops at nearly 80 years old.

Perryman’s daughters receive home schooling from December until September. For those three “off” months, the girls help prepare and maintain the farm for the estimated 10,000 people that will visit the farm throughout six weekends in the fall.

Those thousands of visitors each year have been keeping Coon Hollo alive for the past 10 years.

“My dad is a full-time, lifetime farmer,” Perryman said. “I couldn’t walk into the farm and take income from him. The farm didn’t generate enough as it was. So, we had to figure out a way for my family, my children, my husband and I, to make an income.”

The answer was to turn the farm into an attraction: the Coon Hollo fall festival.

Without the added income from the festival each year, Perryman said the farm wouldn’t survive.

The Coon Hollo fall festival is now a staple in Marion County. It has become a shining example of agritourism in Florida.

Taylor Stein, a professor of ecotourism and natural resources management at the University of Florida, defines agritourism as recreational opportunities on working farms.

“I wouldn’t say they (the farms) have to make money, but it’s usually part of it,” Stein said. “I think from the landowner’s perspective, it is about making money. I think the way most people talk about it, it is as an added income.”

Agritourism is a relatively new term. Perryman graduated from UF in 1998 with a degree in agriculture. She’d never heard the term during her time there.

Perryman said around 50 to 60% of Coon Hollo’s annual income now comes from agritourism.

The visitors, mostly families, will show up for Coon Hollo’s annual fall festival starting on Oct.  4. Admission is $10 for kids four and up. There, they can walk through a corn maze, watch pig races, ride horses and go on hayrides.

Perryman said it took two years to convince her dad to open up Coon Hollo to the public.

“He said, why would anybody pay money to go walk around a field of crop?” Perryman said. “You know, in the heat. Why would they want to come to a farm? It still baffles him to this day.”

By the second weekend, the fall festival was an unexpected success.

“The second weekend we were open we had like 1,500 people in a day,” Perryman said. “With three porta-potties, and you can imagine the reviews we got.”

Perryman’s hands slapped the wooden bench she sat on as she burst into laughter.

“You don’t understand. We didn’t know you were coming,” Perryman said. “Mama said don’t prepare for that many people.”

Besides the added income, Perryman’s father no longer has to worry about his daughters anymore.

“It has given my dad peace of mind,” Perryman said. “I have all sisters, and he was always worried about how we were going to be able to do the level of farming he did. While we can still run the cattle and everything, I can’t fix a tractor like he can.”

Agritourism can be a saving grace to local farms competing against large industrial farms. However, it is not without its risks. There are liability issues involved when customers visit a working farm.

In 2011, a young man hurt his back at Coon Hollo. A $600,000 lawsuit was filed against the farm and its insurance agency. The following year, it was nearly impossible for the farm owners to find another insurance agency.

Two years later, in 2013, Florida passed new laws to help with liability issues connected with agritourism. Under a state statute, if a farm posts a warning sign with the correct phrasing and specification, then an agritourism area cannot be held liable for any damages, injury or loss incurred there. It has become a safety net for small farms like Coon Hollo.

Besides liability issues, zoning can also become a problem for farms.

“There was a problem with agritourism if you look at local zoning laws,” Stein said. “You can be zoned for like agriculture, but if you start doing not agriculture, the local government can come down on you.”

A 2016 revision to the 2013 Florida agritourism laws offers more clarity. For areas classified as agricultural, local governments can no longer impose new agritourism regulations. The county has the power to regulate much of the agritourism in its city limits.

Agritourism has the power to supplement income for local farms, but it also brings education to the surrounding communities. Coon Hollo sees about 100 to 200 kids each weekday during the six-week run of their fall festival.

Perryman said the education aspect of Coon Hollo is essential. The farm educates thousands of kids and families on where their food comes from. Perryman said she could have gotten a different job, but she wanted to use what her family gave her. The festival has given her a sense of fulfillment she isn’t sure she could have found elsewhere

Perryman hopes her daughters can take over the farm in the future.

“They’re so experienced now they can practically take it over in three or four years,” Perryman said. “I mean, they’ve been here since the beginning.”

Michaela is a reporter for WUFT News who can be reached by calling 352-392-6397 or emailing news@wuft.org.
Previous Oct. 10, 2019: Afternoon News In 90
Next Donald Trump Jr. And Kimberly Guilfoyle Speak At The University Of Florida