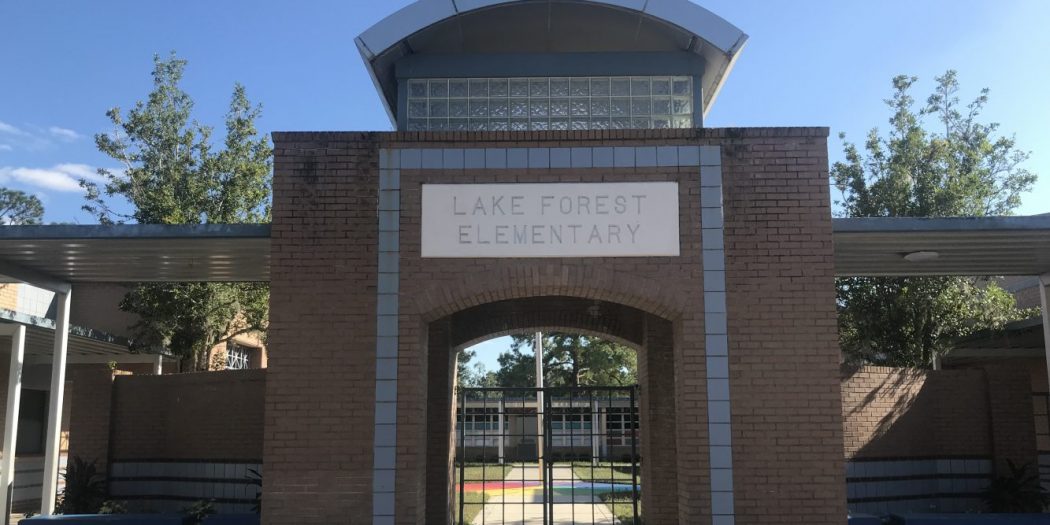 Florida Law Requires The Removal Of A Struggling School’s Principal. That’s What Happened At This Gainesville School

On the east side of Gainesville, at the end of a bumpy road lined with overgrown lawns, stands a collection of faded brick buildings. A small parking lot and rusted fencing accompany them. The paint on the directory signs is chipped, but the mural painted next to the school is unscathed.

It reads “Greetings from Lake Forest Elementary,” and it is colorful and bright.

Lake Forest Elementary School, 4401 SE Fourth Ave., has a population of 489 students. It was an F graded school for five years in a row before receiving a C grade for the 2016-2017 school year. Now, the school has received a D score for the past two years.

Jackie Johnson, spokeswoman for Alachua County Public Schools, said Lake Forest Elementary School also experienced a drop in test scores this year. Because of the school’s low grade and the students’ test scores, the principal, Karla Hutchinson, was let go from the principal position on Sept. 13. Hutchinson was transferred to an administrative position supervising pre-k and exceptional student education, according to Johnson.

Losing Hutchinson has affected everyone at Lake Forest Elementary School, interviews with its teachers show.

Assistant Principal Marjory Francois has had to do the principal’s job as well as her own.

After attempting to contact Francois for several days, both by phone and during in-person visits, it became clear she was unavailable to comment on how the firing of the principal has affected her job and the school.

According to several staff members, Francois has been in and out of meetings and training while also monitoring the school during lunch and dismissal.

The teachers have also felt the impact of losing the principal.

“We all view us as a faculty as a family,” Cacciabeve said. “And we all feel the same as that we’ve now lost a heartbeat.”

Cacciabeve started teaching at the same time Hutchinson took the principal position at Lake Forest Elementary School. Cacciabeve said Hutchinson was a motherly figure and pushed her to do things that she thought she couldn’t do.

“She’s done all those things that I’ve needed to become what I think is a really good teacher,” Cacciabeve said.

“I was very upset because she’s a great principal,” Bowlin said. “And I think she does a really good job.”

Bowlin said Hutchinson was the one who hired her and gave her a shot as a teacher. She said she views Hutchinson as a leader and a mentor.

“Everyone’s upset, they miss her,” Bowlin said. “It’s harder to come to work ready to go when, internally, you know you’re sad.”

Losing Hutchinson only added to the extra difficulties of teaching at a school with a D grade.

At Lake Forest Elementary School, the emotional needs of the children are a high priority, Cacciabeve said. The majority of the kids at the school need some type of emotional intervention when regulating and expressing their emotions. Cacciabeve also said that parental involvement is very low, and the school doesn’t have a PTA. Many of the parents don’t have time to be involved due to having several jobs or other priorities.

Bowlin said the added challenge of teaching at a low-grade school is being aware of and compassionate about what students are going through. Some have parents in jail or have to take care of their siblings.

“You never know what could have happened before they got to school,” Bowlin said.

The students have noticed Hutchinson’s absence, too.

“When I told my kids she wasn’t going to be here,” Bowlin said, “they were really upset. Like, ‘We want her to come back, we miss her.’”

Bowlin said Hutchinson had a great relationship with the kids and was very present in the school.

The next step is for the county to hire a new principal that meets the state’s requirements, Johnson said. Then, the principal will have to be approved by the Florida Board of Education.

Cacciabeve said the school recently had a staff meeting discussing traits they would want in a principal. A similar meeting was held for parents. Only one parent showed up to the meeting, Cacciabeve said.

All the teachers can do is make the day as normal as possible for the students.

“I know we’re all going to still try our best and fight for the kids,” Bowlin said. “And that’s what she would want.”