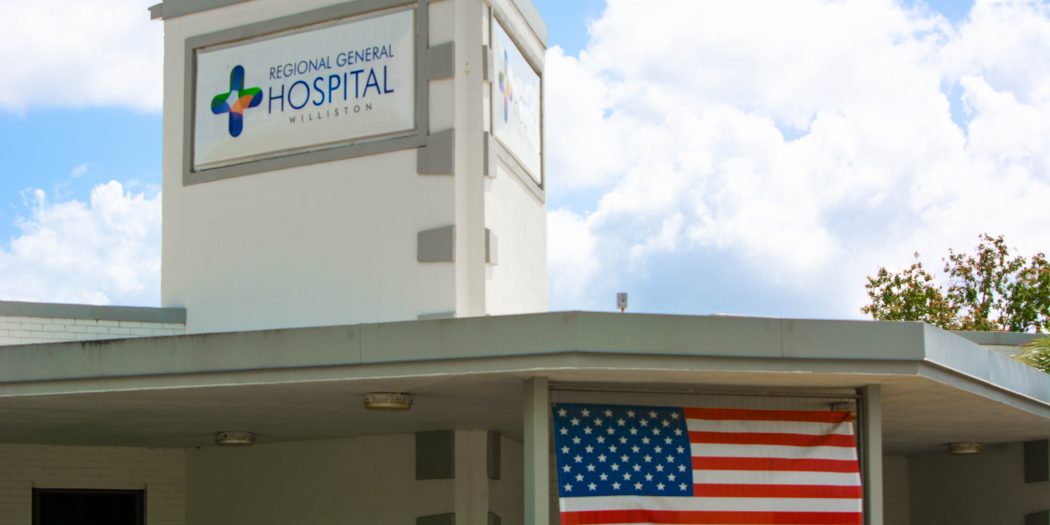 The Regional General Hospital of Williston locked its doors in June with everything inside. (Carolina Watlington/WUFT News)

As a mother, Williston resident Jennifer Holder was first concerned when she heard about the closure of Williston’s Regional General Hospital. Now she’s taking care into her own hands.

“If you need stitches, you figure out how to give yourself stitches,” Holder said.

Since the hospital closed in June, Williston residents must now travel to Ocala or Gainesville for immediate medical care. The sudden closure left employees without work, some of whom have been waiting months for backpay.  Others are just hoping to collect unemployment after being cut off from communication with hospital owner and Miami businessman Jorge A. Perez.

Ravi Vuppalapu, the former chief operating officer, told WUFT he also has not heard from Perez.

“I have been waiting on the owner to tell me something,” he said.  “I am waiting on him.”

Perez was listed as the president of Regional Health Parnters, LLC, which operated Williston’s Regional General Hospital until Florida’s Agency for Healthcare Administration denied its license renewal.  Perez operates a complicated web of limited liability corporations and several rural hospitals in states across the country including Missouri, Georgia, California and Florida. He also has been the subject of multiple lawsuits including a 2017 federal investigation into fraudulent billings as high as $90 million in Missouri and a 2018 suit from Blue Cross Blue Shield of Georgia.

Perez was unavailable for comment after repeated attempts to contact him by phone and through his attorneys.

While the closure of Williston’s only hospital was sudden, it did not come as a surprise to most residents after reports of utility debt and tax liens. In February, the hospital risked closure as it struggled to pay back over $58,000 in utility debt to the city of Williston. The city and Perez had agreed upon a repayment plan for the utility debt, which ultimately was paid off in April, two months before it lost its license to operate.

The state Agency for Health Care Administration originally rejected the hospital’s license renewal due to too many errors. The hospital appealed after the deadline and was denied, closing effectively on June 26.

While some Williston residents have come to terms with the small town’s hospital closure, others still haven’t given up the fight.

Pete Burger, the former director of radiology and longtime advocate of the hospital, continues fighting for the hospital since the closure of its emergency room last year.

“Everyone has pretty much given up on it, which is sad,” Burger said.

Williston Mayor Jerry Robinson said in an email that the hospital closure is a great loss to the community, particularly those needing emergency room services, as they will now have to travel to Gainesville or Ocala.

Burger said that his friend, Levy County Public Safety Director Mitch Harrell, recently told him that the turnaround time for an ambulance to take a Williston-area resident to a nearby hospital is three hours — stocking the ambulance, picking up the patient, driving to either Ocala or Gainesville, dropping them off at the hospital and restocking the ambulance.

But most Williston residents are concerned about ambulance mileage costs rather than the turnaround time, said Burger.

Harrell’s assistant, Alesha Rinaudo, said ambulance rates are set by the Board of County Commissioners of Levy County. Base ambulance costs vary from $295.96 to $961.88, depending on a patient’s care.

In addition to the base cost, patients have to pay a transport mileage fee, costing a Levy County resident $14.65 per mile for distances between one to 17 miles in an ambulance. For distances over 17 miles, the cost is $9.76 per mile.

The nearest hospital to the city limits of Williston is UF Health Shands Hospital in Gainesville — roughly 21 miles away. For residents west of the city’s east border, they will have to pay more than $200 just in mileage fees.

Since the hospital’s closure, Levy County Fire Rescue is no longer permitted to use the helicopter pad on the hospital’s property, according to firefighter Ethan Standridge.  Instead, they land on a large field next to a nearby church.

“It works fine, and we can get through it,” Standridge said. “It’s just not as ideal because the hospital had lights, fencing and an actual landing pad, so it was really easy, and we had been doing it out of there for years.”

Despite the abrupt change, Rinaudo said safety and service won’t be affected. “LCDPS has and will continue to provide quality emergency response services to the citizens and visitors of Levy County,” she said.

The hospital’s closure left a lot of holes in the community.

Years ago, the hospital had local classes for the community, like education for diabetics and smokers trying to quit.

“They have an invested interest in the community when you have a local hospital,” Burger said of the health care team at the hospital.

The hospital also employed about 150 people, Burger said, but some left before it closed.

“Some people stopped getting paid months and months before it even closed,” Burger said.

“The biggest obstacle (for the hospital) is the rules for critical access, which are special for small, rural hospitals that operate under different rules and can make more money,” Burger said. “But in order to get that designation, you have to be at least 25 miles away from any other hospital.”

The rate of rural hospital closures has increased significantly since 2010, according to a 2015 federal study published by the Journal of Rural Health. The hospitals that closed between 2010 and 2014 had lower levels of profitability and patient volume due to smaller populations and lower equity.

“The hospital kept changing hands because these guys just wanted more money, and it wasn’t bringing in enough as they wanted, which is why they all got out,” Burger said. “They had no best interest in the community.”

Carolina Watlington is a general assignment reporter for WUFT. You can contact her at (561)-693-8751 or linawatlington@gmail.com.
Previous Florida Governor Proposes Minimum Teacher Salary Of $47,500
Next Alachua County Vape Retailers Said County Ordinance Could Boost Black Market Sales And Vaping Illness