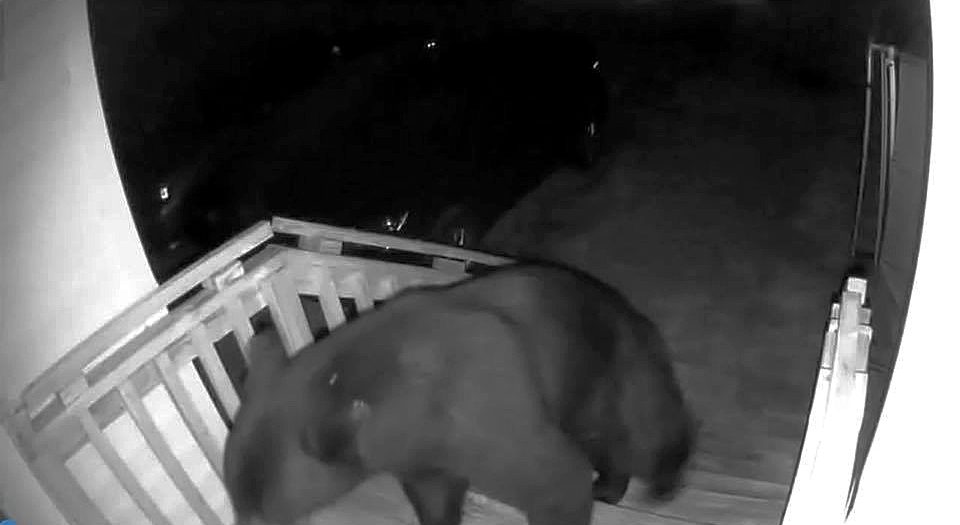 A bear climbs the steps at the front door of Waldo local Mike Pregony about two months ago. The bears frequent Pregony’s property near Lake Alto.

Waldo Wildlife: Too Much To Bear?

It was a crisp, December night in Waldo, Florida, and Angela Smith and her family were sitting around their backyard bonfire, watching the dancing flames and enjoying each other’s company. They didn’t realize an uninvited guest was also enjoying the warmth of the fire and the tempting smell of decaying food drifting from the nearby trashcan.

The Smiths, along with other Waldo residents, have reported numerous encounters with bears recently — in their yards, on the paths where they run and walk, at the school bus stop in the morning. Florida Fish and Wildlife Conservation Commission representatives have told them there’s nothing they can do to remove the bears. They can only offer tips for avoiding them.

As much as she wants to protect her family, Smith said, she feels helpless. All she can do is keep her kids indoors as soon as the sun sets, keep the trashcan — the bear’s buffet — in the garage and keep the bear whistle given to her at a Waldo city council meeting tucked away in a drawer. But she hopes that she never has to use it.

“I have three young children,” she said. “I just want these bears gone. Sometimes my kids are scared to sleep because of the bears, and I have to comfort them and tell them Daddy will protect us, but the truth is, our hands are tied. I’m scared.”

This isn’t the first time bear sightings have increased in Waldo. The Florida black bear is not a rare occurrence, as there are approximately 4,050 of them statewide, according to the most recent research done by FWC. From 1974 until 2012, the Florida black bear was considered a state-designated threatened species, but after years of conservation, it was removed from the threatened species list in 2012.

Despite the recent resurgence of the Florida black bear, it remains illegal to shoot or injure the species, even if the bear is on your property, under the Florida Black Bear Conservation Law. Under this law, first-time offenders can be charged with a misdemeanor, which can result in fines up to $500 and/or 60 days in jail. Prior offenders can receive higher penalties, with imprisonment up to one year, a fine of up to $1,000 and suspension of recreational hunting and fishing licensing privileges.

Though there are exceptions to the rule, such as cases in which a human life is seriously threatened, FWC regulations are adamant about allowing shooting or injuring of a bear only as a last resort. Instead, FWC suggests using bear spray from a distance of 20 to 30 feet or scaring the bear away with loud noises such as yelling, using car or air horns, banging pots and pans together or blowing a bear whistle.

“I called FWC to complain to them about the bear issue, and they just told me not to shoot it,” Smith said. “I told them that this street is full of kids that could be in danger, but they just kept saying: ‘Don’t shoot it.’

“I’m sorry, but if it ever comes down to my kids and this bear, the bear is going down.”

While shooting a bear is illegal, FWC’s website states that the commission might be open to multiple population management options, including the possibility of regulated hunting.

During the hunt, FWC monitored the number of bears killed, preparing to stop the hunt when the harvest approached the statewide objective of 320. In the end, the total harvest was 304 bears.

However, the bear hunt created its own controversy. Many Floridians were upset by the hunt, even holding protests against it. Some of the signs read: “Stop Bear Hunt,” “Killing Is Not Conservation” and “Bear Hunt = Trophy Hunt.”

The updated draft of the 2019 Bear Management Plan contains a new section that mentions multiple population management options, while stressing that none have been approved.

“As directed by our commissioners two years ago, we have been focused on updating and revising FWC’s Bear Management Plan before considering future bear hunts. We plan to release the updated plan for public comment in early October and present to Commissioners this December,” said Tammy Sapp,  FWC Hunting and Game Management Division spokeswoman. “In terms of a bear hunt in the future, the updated plan will fully address bear hunting and any decisions in that regard will be up to our commission.”

For now, Waldo residents can only follow the tips FWC provided at a city commission meeting in February: Remove possible food attractants such as trash cans or bird feeders from your yard. Scare the bear away with loud noises. Get a bear-proof trashcan, which can cost hundreds of dollars.

Even when people follow those tips, the bears show up. Waldo city manager Kim Worley said bears have shown up where teenagers were waiting at a school bus stop at dawn, at the front doors of Waldo residents at night and on her daughter’s morning run.

Smith said the bears are forcing her family to spend more time indoors.

“I can’t let my children play alone in the yard anymore,” Smith said. “We can’t have bonfires at night. I used to go on nightly walks with my friends, but I can’t anymore. We’re always on the lookout now.”

Jill Brown Varnadore, who recently moved to Waldo in March, is also concerned for the safety of her children. She said that she has spotted several bear footprints on her daily walks on the conservation path by her home.

“I am very cautious, especially because I have two daughters, and the youngest is 11,” Varnadore said. “I worry about them when they’re out. When I first moved here and attended my church, everyone warned us about the bear.”

Worley said the Waldo residents will have to find ways of coping with the bears.

“We are obviously worried about our little pets, and one day, I’m afraid that a teenager at the bus stop will do something stupid and poke a bear with a stick,” Worley said. “But the bears were here first. We are invading their territory, and it is our responsibility to figure out how to coexist alongside them without disrupting the balance of nature.”

Juliana Cuadra is a reporter for WUFT who can be reached at julianacuadra@ufl.edu.
Previous “Quality Has Got To Be There:” Florida Health Care Chairs Discuss Health Issues In The State
Next Oct. 2, 2019: Afternoon News In 90