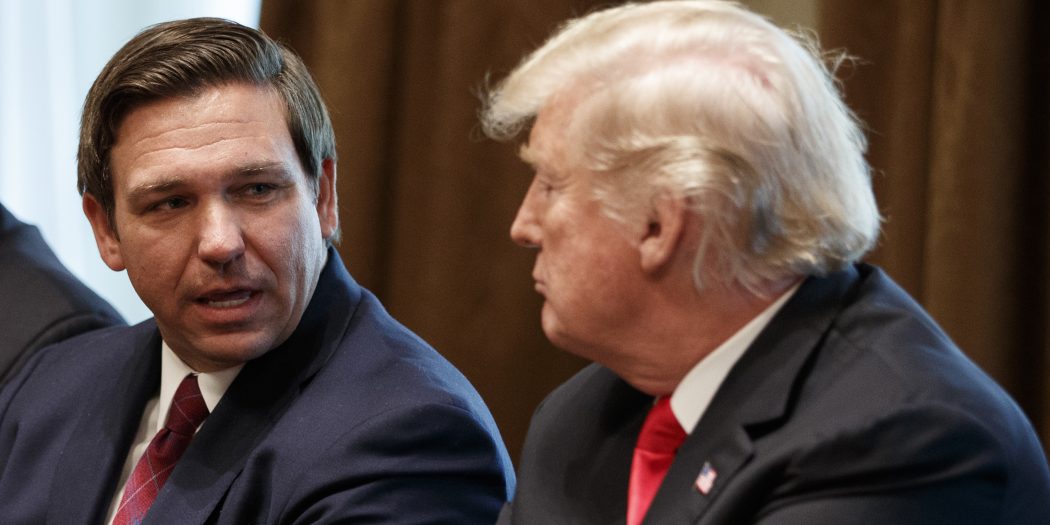 Florida Gov. Ron DeSantis talks with President Donald Trump during a meeting with newly elected governors in the Cabinet Room of the White House in December 2018. (AP Photo/Evan Vucci)

Florida Gov. DeSantis Will Join President Trump For Visit To The Villages

TALLAHASSEE — Gov. Ron DeSantis will be on hand when President Donald Trump visits friendly turf Thursday in The Villages, but two of the president’s other closest Florida allies won’t accompany him.

Republican Party of Florida Chairman Joe Gruters and Congressman Matt Gaetz have prior commitments and will not be able to attend the president’s event, which is happening in the midst of a U.S. House impeachment inquiry into the president.

The Thursday afternoon event in the Sharon L. Morse Performing Arts Center is expected to draw a crowd of Trump supporters at the sprawling retirement community, a Republican stronghold where Trump overwhelmingly won in 2016. The Villages includes parts of Sumter, Lake and Marion counties.

“Sadly,” Gaetz said in a text message, he won’t be able to attend because of being “previously committed to a base visit and other events in my district.”

The Panhandle Republican has described the impeachment inquiry as hinging on “rumors, based on faulty evidence, and based on a blood lust for the president politically that does not serve our nation well.”

Gaetz has regularly attended Trump events in Florida, including Trump’s ceremonial 2020 re-election campaign kickoff in Orlando and a Panhandle rally this year.

Gruters, who doubles as chairman of the Florida GOP and as a state senator from Sarasota, has also been a usual fixture at the president’s Sunshine State events. This time around, though, he will be absent due to a prior engagement with Sen. Jeff Brandes, R-St. Petersburg.

As members of the Senate Criminal and Civil Justice Appropriations Subcommittee, which Brandes chairs, the lawmakers had scheduled visits at Florida prisons, according to Max Goodman, an adviser for Gruters.

DeSantis, whose support from Trump is widely credited for his win in the 2018 gubernatorial race, will attend the Villages event with the president, Meredith Beatrice, a DeSantis spokeswoman, confirmed Wednesday morning.

The governor and the first lady have accompanied Trump at Florida rallies, including the president’s 2020 re-election launch in Orlando. Florida is a battleground state in presidential races and played a key role in Trump’s 2016 win.

Ron DeSantis, a former congressman, has defended Trump during the impeachment inquiry by saying the events in Washington are a “charade.” He also has rallied supporters on behalf of the state Republican Party to raise money for a “President Protection Fund.”

At the Thursday event, the president is expected to talk about his administration’s health-care agenda, as well as sign an executive order related to “improving the Medicare program in the United States,” according to a White House official.

But as is usually the case, Trump is also likely to bring his signature brand of speaking that caters to his GOP base. It remains to be seen if he will discuss the impeachment inquiry, which on Tuesday night he contended was a “COUP.”

The News Service of Florida is a wire service to which WUFT News subscribes.
Previous The Point, Oct. 2, 2019: Meet The Dentists Working In Rural North Central Florida’s ACORN Clinic
Next “Quality Has Got To Be There:” Florida Health Care Chairs Discuss Health Issues In The State