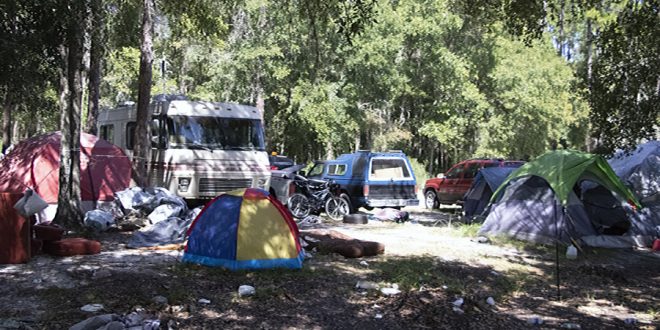 Tents are scattered around Dignity Village, providing some protection against the hot weather and wildlife during Florida summers. (Valentina Botero/WUFT News file photo)

Dignity Village To Close Down As Grace Marketplace Gets New Funding

For many, a car’s main purpose is to take them from point A to point B. But for Bobby Sullivan, 68, it is more than just a mode of transportation.

It is the roof that keeps him covered at night and the source to power on his portable ventilator.

Sullivan is a retired Gainesville native who has been homeless for the past two years and resides in his car parked in Dignity Village, a homeless encampment not far from the Gainesville Regional Airport.

Starting Tuesday, there will be a fence that outlines the camp for the purpose of preventing new people from moving in. Security officers are stationed at the entrance, keeping track of movement in and out of the camp that’s been active for the past five years.

Dignity Village was initially started by the City of Gainesville to help out the homeless population within the city. Over the years, approximately 200 people have become concentrated in the area, living in tents and RVs seen all scattered throughout the area.

“It’s the Holy Ground,” said Helen Fernandez, 36, who had begun sleeping there for a week in late September and was unaware of the plans to close it.

Annual reports compiled by the state’s Council on Homelessness showed that in 2014 when a point in time count was conducted in Alachua County there were 1,516 homeless people. That number in the past four years has decreased to 641.

That 57% decrease in the homeless population could be linked to Grace Marketplace’s opening in 2014.

Grace Marketplace is a taxpayer-supported safe haven that has helped homeless people to get off the streets. The staff there offer a variety of services like safe emergency shelter, permanent housing, showers, hot meals and job training.

The homeless facility’s leadership says they have housed over 600 people during the past half-decade and helped decrease the number of people on the street by 52%.

Contrary to popular belief, drugs and alcoholism aren’t the only contributing factors in why people become homeless. Families or an individual can become homeless due to unemployment, personal or family crisis and/or the lack of affordable housing.

Sullivan, who gets a retirement check every month, says it is not enough to allow him to afford to rent a place. He has tried to get on Gainesville’s public housing waiting list, but he said his attempts were not successful.

Now that Dignity Village is projected to close down by the start of next year, Sullivan does not know where he will go next.

“I’m gonna go to Grace (Marketplace) and see if I can get on the waiting list,” he said.

On Sept. 24, Gainesville City Commissioner David Arreola proposed a three-year plan for the funding of Grace Marketplace. Within the plan, in fiscal year 2020 that began Oct. 1, the commissioners proposed that Alachua County and the City of Gainesville will both give $75,000 for Grace Marketplace and $254,000 to close Dignity Village.

And for 2022, the city will completely fund Grace Marketplace with the one condition that the county continues to give $1,500,000 for a rehousing program each year after that.

Valentina is a reporter for WUFT News who can be reached by calling 352-392-6397 or emailing news@wuft.org.
Previous Environmentalists Speak Out Against Nestlé Permit
Next Oct. 1, 2019: Afternoon News in 90