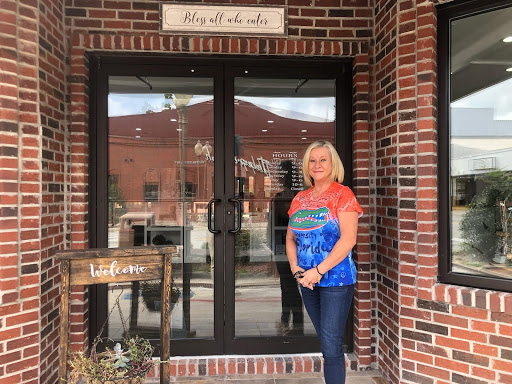 Vickie Williams Forsyth stands outside of Williams Jewelry’s new location at 134 W Call St. Forsyth is concerned that the lower traffic on Call Street will reduce the number of customers the business brings in. (Bailey Wingate/WUFT News)

Making room for the new railroad overpass to be built along State Road 100 in Starke has required relocating multiple businesses, including Williams Jewelry, Showcase Signs and Advertising, Revels Fast Lube, and George Restea’s medical office. However, some of the owners of those businesses say the move has been worth it.

The new railroad overpass will route vehicles over the railroad tracks from Walnut Street to Church Street to reduce traffic congestion and lower emergency vehicle response times. To build at this location, Florida’s Department of Transportation had to purchase land that had been occupied by the eight businesses and five homes.

Stephen Browning, Florida’s Department of Transportation project manager for the overpass, said now that DOT has completed the truck route that opened last week, the focus will now shift to the overpass construction, set to begin in early 2020.

The truck route allows vehicles to bypass Starke and is intended to reduce traffic on U.S. 301.

Vickie Williams Forsyth said her family has owned Williams Jewelry for 67 years and had been at the previous location on Madison Street for about 30 years when FDOT notified them they’d have to move because of the overpass.

They closed the old store June 1 and reopened in the new location at 134 Call Street Sept. 14.

“I have been a nervous wreck; I mean, it has been very difficult,” Forsyth said. “But it’s done now, and so we’re just settling in.”

Trent Patterson of Showcase Signs and Advertising said the June 1 deadline was inconvenient for his family, leaving them with a very short time to change locations.

“At that time, we thought it was the end of August 2019, so we went on Christmas vacation, and when we came back in January, they told us ‘No, we need you out by June 1’,” Patterson said.

According to FDOT plans, any businesses or home owners who must relocate due to construction can use the FDOT Relocation Assistance Program to help with the transition. The primary purpose of this program is to provide financial and advisory assistance to those directly impacted by transportation projects.

“They were very fair with everything else, but I would say the time was my major complaint,” Patterson said.

Troy Roberts, an FDOT communication specialist, said the land acquisition process is still ongoing and that he does not yet have an estimate on how much has been spent on the 28 parcels of land FDOT has purchased. He also said he doesn’t have information on who those parcels once belonged to.

“The hardest part is getting everything from one place to another and still doing your everyday tasks and work,” Patterson said.

Forsyth, on the other hand, said she is nervous about Williams Jewelry’s new location on Call Street.

“I do think it will affect business because the traffic on this road, compared to the traffic on (State Road) 100, is just no comparison,” Forsyth said. “There was just lines and lines of traffic on 100 and very little on Call Street.”

Nonetheless, many business owners and residents expressed positive attitudes about the railroad overpass.

Tamara Jackson, owner of Call Street Café, said she is optimistic about the overpass and believes the transportation projects are encouraging business owners to revamp the downtown area.

Dan Williams, executive assistant for Starke’s city manager, said he too thinks the overpass and other projects will benefit the town.

Those directly affected by the overpass’s construction also seem to have a positive outlook on the situation.

“My personal opinion is I’m not sure if it’s necessary, but then again, if my son was stopped at a railroad in an ambulance, I’d be yelling that he needs to get across,” Patterson said. “So I’m not against it by any means.

“We made it this long without it, but I understand change and progress has to be made.”

Forsyth said that although moving Williams Jewelry was difficult, she doesn’t feel negatively about it because it’s for a good cause at the end of the day.

“There’s so many trains that the rescue [vehicles] can’t get to the hospital,” she said. “It’s inconvenient, but if it can save lives, I’m all for it.”

FDOT documents predict that 40 trains a day will pass through Starke by 2020.

The FDOT documents also state that this $32 million project is expected to save at least two minutes of travel time for emergency vehicles needing to get from one side of the tracks to the other.

The emergency management services, fire station, hospital, and Starke police and sheriff’s departments are all on the western side of the railroad tracks.

Forsyth said the move was frustrating, but necessary. In addition, because her business previously had multiple owners at the old location, they had to split the FDOT purchase money four ways. She’s now the sole owner, so she had to borrow money to purchase her new building.

“I definitely did not want to have to rebuild at 61 years old and having to start over with new inventory, I’m nervous,” she said. “But a life is more important than money.”

Previous The Point, Sept. 27, 2019: Florida’s Rainy Season Is Ending, And Parts Of The State Are In A Drought
Next Gainesville City Commission Selects Lee Feldman As New City Manager