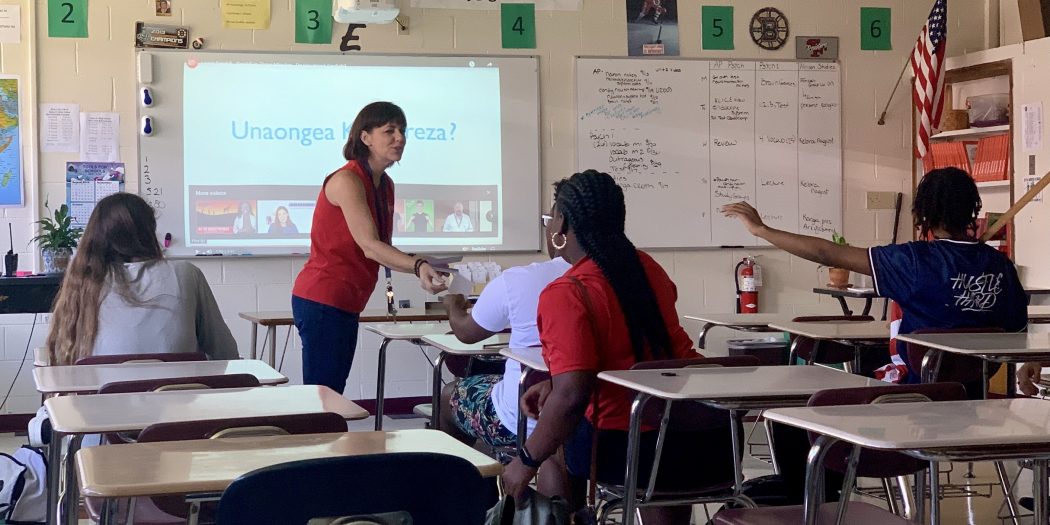 Tara Gabriel, 48, hands a notecard to senior Na’Tazeigha Jenkins to write down the Swahili phrases learned in class on Sept. 20. (Hannah Beatty/WUFT News)

Tara Gabriel isn’t sure what she’s teaching next week.

Perhaps her class will focus on central Africa next or maybe the west. There is so much ground to cover – literally and figuratively – in one semester.

Gabriel is teaching a new elective course to 17 students at Santa Fe High School this semester about African history. The class is part of Alachua County Public Schools’ priority to increase racial equity and culturally responsive education in the classroom.

Elizabeth LeClear, principal of Santa Fe High  School, said when she received the call this summer from Jennifer Wise, the Alachua County K-12 curriculum executive director, to add the classes, she immediately thought of Gabriel.

“I knew that if I had her be the teacher, kids would sign up,” LeClear said.

Gabriel’s classroom decorations reflect her dynamic presence. Potted succulents with names like Ringo and Clarissa line the room for students to observe the effect of positive and negative words on growth — a project for her Psychology students and African History students alike.

“We’re getting one for African Studies when we do names and meanings of names,” Gabriel said. “They’re going to vote on a name based on a meaning, and then they want to decorate the pot.”

Gabriel, who has taught social studies at Santa Fe High School for 16 years, said her project-based African History honors class, is based on the achievements of Africans and African Americans.

One Friday, for example, the students presented their own kanga cloths on printer paper. Kanga cloths are colorful African garments used to communicate messages through bright colors and proverbs.

“I told the kids, if your ex breaks up with you, you can wear something that says, “You’ll never get something this good again,” in Swahili obviously, and wear it past his house,” Gabriel said. “That’s something that stuck, and they thought that was hysterical.”

Some were adorned with fish, trees and patterns. The drawings mirror the blue kanga cloth on the southern wall that reads, “in the goodness of God He increases mercy” in Swahili.

Zakira Wesley put crosses and x’s and o’s on her kanga cloth with the proverb: “do unto others as they do unto you” to communicate love and Christianity. The 17-year-old Santa Fe High School senior said she thought about switching out of the class at first, but the first few lessons changed her mind.

“When she started teaching, I realized it’s not just about African American, black people. It’s about all different cultures,” Wesley said. “That interested me.”

Demonte Holmes, a 17-year-old junior, changed all of the classes his guidance counselor placed him in — except for Gabriel’s class.

“I never had a class like this before,” Holmes said.

Holmes said he hopes to learn more about African history to prepare him for life after the classroom.

When Gabriel looks back on her high school education about African history, she remembers Egypt and the Western Kingdoms. That’s it.

“There’s such a variety of cultures that we don’t ever teach about,” Gabriel said.

Gabriel said most of her ideas for the class originate from her time at UF’s Center for African Studies Summer Institute on Africa nine years ago. This is where she received the kanga cloth.

The two-week institute is available for elementary to high school teachers. It shows them how to teach about Africa through geography, religion, literature, politics and art, said Agnes Leslie, the outreach director and a master lecturer for the UF Center for African Studies.

“The excuses for not teaching about Africa are getting slimmer and slimmer,” Leslie said.

The courses look a little different at each high school because electives allow for more flexibility. Harris has her students follow along in an interactive notebook adorned with their choice of a Ghanian cloth — on printer paper of course.

Gabriel, along with the other African/African American history teachers, collaborates with the UF Center for African Studies for materials, lessons and guest speakers.

Back in class, Gabriel leads the students through an instructional video on Swahili phrases.

The students must practice these phrases out loud to the class.

“If we fund classes like this, we’re saying this history is important,” Gabriel said.