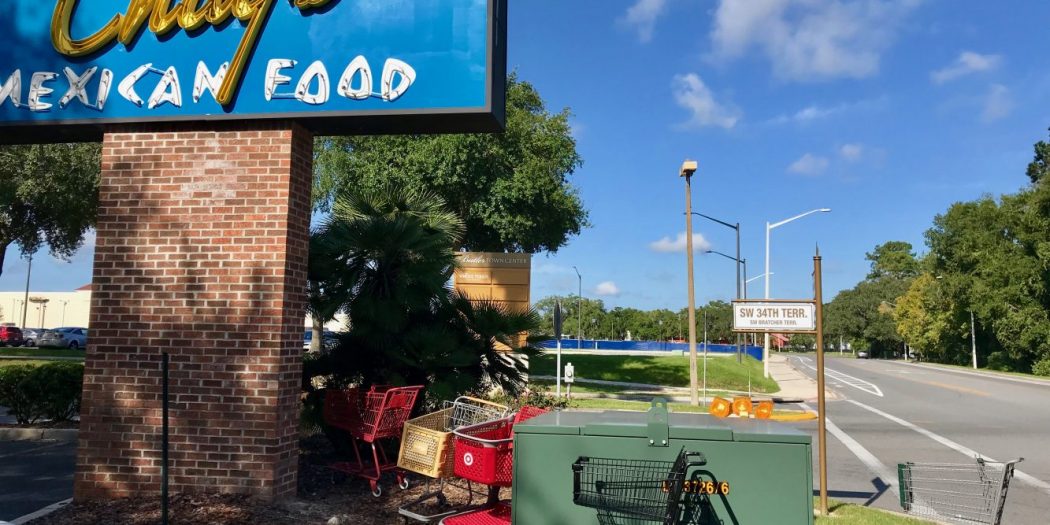 Lonely shopping carts litter the sidewalks far from their intended place in Gainesville.

Some carts rest in clusters on busy street corners, while others lie rusting in trenches.

“We see debris. We see slum. We see blight all the time,” Commissioner Gigi Simmons said of the issue of stolen and abandoned carts at a City Commission meeting last month.

Florida law asserts that taking a shopping cart off the premises of a business is considered theft and a first degree misdemeanor. Stealing a shopping cart in the state is punishable by up to one year in prison, though individual cities may enact stricter policies.

Simmons discussed the matter with the commission after she received an email from a resident, Mark Cowan, about the carts left across Southeast Gainesville. Cowan complained about children playing with the carts and the elderly struggling to get around them.

“Those carts are a nuisance and an eyesore,” Cowan, 66, a retiree who lives near Southeast Second Avenue and Southeast 20th Street, said in an interview. Cowan said he is tired of nothing being done to remove them. Saying that city officials “know we’re poor,” he added: “They think we’re powerless. This is a red flag. The police won’t touch the shopping carts, and I’m sick of it.”

Cowan said the abandoned carts should be treated like any other stolen property. He said he has contacted commissioners – including with photographic evidence – on multiple occasions.

Simmons agreed that the problem needs to be addressed.

“If we don’t have something in place, we are going to continuously have the litter and safety concerns that our city faces in areas of color,” she said at the commission meeting on Aug. 22.

Commissioner Adrian Hayes-Santos is among those attributing the problem to poverty and homelessness in the city.

“Someone would take a cart because they have issues carrying their groceries,” Hayes-Santos told WUFT News. “The homeless have transportation issues.”

Hayes-Santos said the city is working on ways to make “first mile/last mile” transportation more accessible, so people can easily go from bus stops to their destinations. He said the city would continue studying the matter into the beginning of next year before deciding on a solution.

Carl Hayes, 47, of Gainesville, lives on the street and spends a lot of time at Tumblin Creek Park on Southwest Sixth Street. A few weeks ago, he found an empty cart at Rosa Parks Bus Station.

“The cart was just sitting there, and I don’t want to tote my bags around, so I just stuck them on the cart,” Hayes said.

Hayes said he usually carries his things long distances on his shoulders, because “if you don’t have money, you can’t take the bus.”

James Lee, 76, spends most of his time on the streets in Debra Heights around Northeast 16th Avenue. He tries to pick up a few bucks from people outside the nearby Circle K gas station.

Lee stores his belongings in a box and limits his transportation needs as much as possible. When a police officer asked recently about a shopping cart beside him, he insisted it wasn’t his. He knows some officers will arrest homeless people for having carts and other trash around them.

Steve Joplin, the city’s solid waste manager, told the commissioners at their meeting that the shopping carts dilemma adds to the large-scale litter issue in Gainesville.

“There are a number of departments that end up having to pull carts out of city facilities” and ditches and retention ponds, Joplin said. “It costs a lot from a time standpoint,” he said.

He also said the city public works department has tried working with retailers in years past to solve the matter, but they typically don’t have the staff and vehicles to retrieve their carts.

“Once the carts come to us, there’s no good way to get them back to the shopping centers,” Joplin said.

Two other possible solutions: Fining retailers for carts that they own and are found abandoned around the city and requiring them to employ technologies – for example, wheel-locking mechanisms or physical barriers – that keep carts on their property.

Stolen carts are not the fault of retailers, said James Miller, senior director of external affairs for the Florida Retail Federation, which is based in Tallahassee.

“Shopping carts already cost $150 to $300 to begin with, so adding the fines just adds an additional burden on the industry,” Miller said.

Miller said the issue requires stronger enforcement of applicable state laws more so than any local remedies that “just punish businesses for something that is really difficult to control.”

The Loss Prevention Research Council, headquartered in Gainesville, is a coalition of 72 retail chains that seeks to help reduce theft, fraud and violence. The council’s founding director, Read Hayes, said “any technology can be defeated” when it comes to protecting shopping carts.

Hayes added: “Some retailers can’t afford to put anti-theft technology on all their carts. For a supermarket chain, their profit margin is very razor thin.”

Daniel Gavin, 55, is also homeless in Gainesville and has a smaller cart attached to his bicycle. He bought it from another homeless man, but wasn’t sure where it originally came from.

Gavin said most of the stolen shopping carts he sees people with were broken from overcoming the anti-theft technology.

“They’ll still take the carts when one wheel locks up, and they just have to drag it,” Gavin said.

Molly is a reporter for WUFT News who can be reached by calling 352-392-6397 or emailing news@wuft.org.
Previous African, African American History Now Taught In All Alachua County Public High Schools
Next Sept. 26, 2019: Morning News in 90