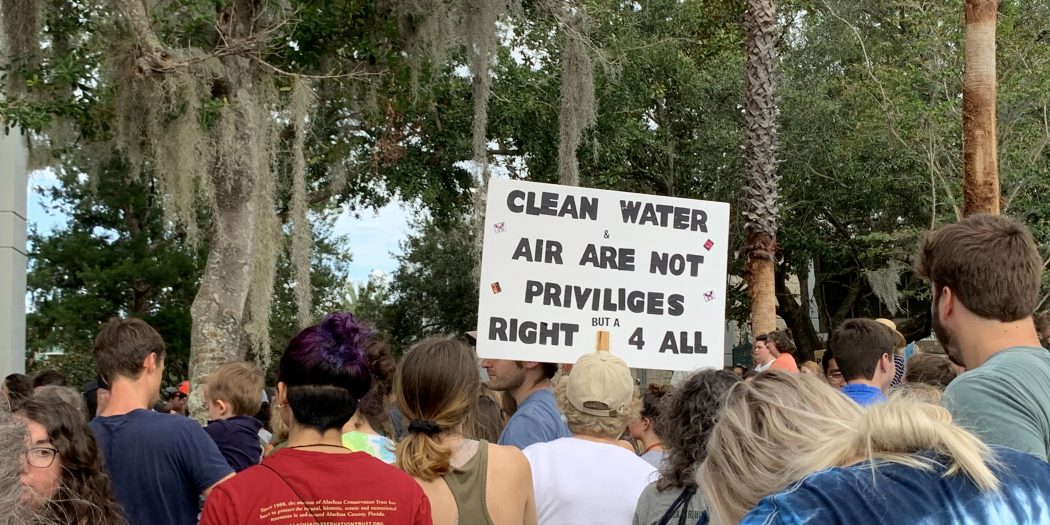 About 100 people attended the Gainesville rally at City Hall on Friday. Many held signs signaling their views. (Andrea Giraldo/WUFT News)

Anna Mavrodieva, 17, is a 12th grader and president of the environmental science club at Eastside High School in Gainesville, and a co-leader of Young Leaders for Wild Florida, an environmental leadership program.

Emma Turner, 18, is a freshman majoring in horticulture at the University of Florida and also a member of the summer program, which is hosted by Alachua Conservation Trust.

Anton Kernohan, 20, is a sophomore majoring in political science at UF. He organized the rally at Gainesville City Hall that was part of a worldwide youth effort on Friday to bring attention to what they say is a climate crisis. Kernohan, Turner and Mavrodieva were among several speakers who urged an estimated 100 supporters at the local rally.

Issues like the proposed phosphate mine in Bradford and Union counties have kept them focused on their cause.

“Environmentalists across north central Florida, including myself, have been fighting the construction of the HPS II phosphate mine for over two years,” Mavrodieva said.

Calling it one of the largest youth-led “strikes” ever, The New York Times reported that over 100,000 people attended rallies in Berlin, Melbourne and London. In New York City, it was around 250,000. All of them came together with the same goal in mind – to convince local, state and national governments to change the laws in favor of climate change.

“When I noticed the national team announced the date for Sept. 20, I noticed no one had registered anything here in Gainesville,” Kernohan said. “At first it was just, you know, me doing it, planning it, but since then, it has grown.”

The strike was timed to happen before the United Nations Climate Action Summit on Sept. 30 in New York. World leaders are expected to come together then to discuss ideas on how to deal with climate issues. The youth strikes were meant to convince them that change needs to come fast.

“We are the creation of the world we inhabit,” Turner said told the Gainesville crowd.

It wasn’t just the youth demanding action at the local rally. Connie Haverkamp, 72, a retiree, sat toward the back of the rally, happy to allow the young folks to take charge in the front.

“I individually don’t have children, but I have nieces and nephews and they deserve it,” Haverkamp said of a healthier environment and planet. “And the way we’re going, we won’t have water to drink or a beautiful blue sky to be under.”

David Arreola, the youngest city commissioner in Gainesville, offered his support at the rally.

“Without a federal Green New Deal, there is no hope,” Arreola told the crowd. “Inform yourself and vote in every election.”

Many among the crowd carried signs with warnings for their elected representatives to act.

“We stand for what we stand on,” stated another.

Heather Haley, 20, a junior majoring in computer engineering at UF, attended the strike to demand legislation for the environment. “Don’t be a fossil fool, climate change is real,” read her sign, which also had a drawing of the earth on fire next to the words.

“In the grand scheme of things, nothing matters if there’s no planet,” Haley said.

Andrea is a reporter for WUFT News who can be reached by calling 352-392-6397 or emailing news@wuft.org.
Previous Gators Blow Out Tennessee In The Swamp, 34-3
Next The Point, Sept. 23, 2019: Florida Catches Up In Processing Its Backlog Of Sexual Assault Kits 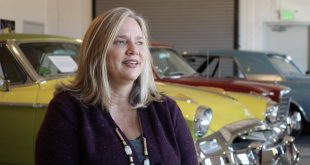