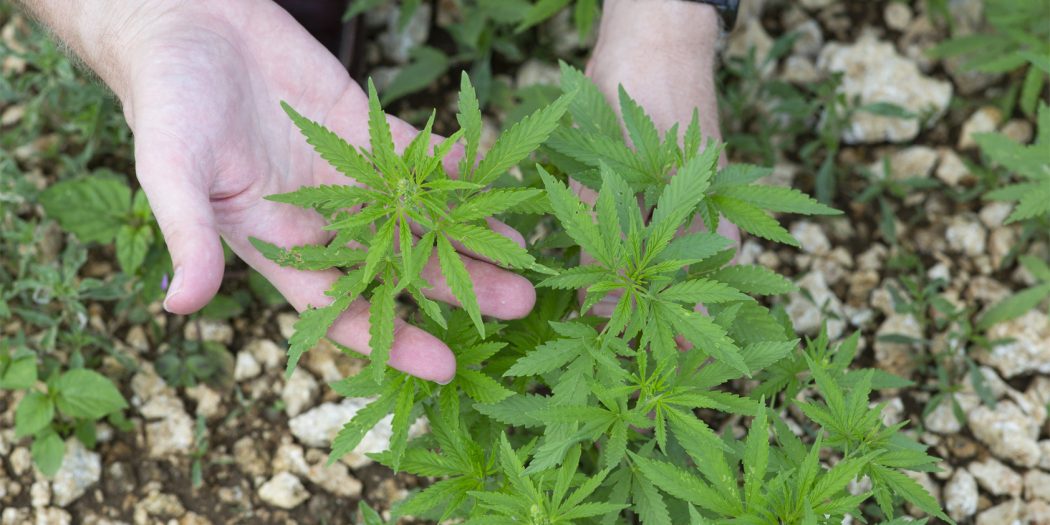 Along with watermelons and peanuts, industrial hemp may join Newberry’s staple crops in coming years.

The Hemp Industries Association of Florida brought its educational workshop to the Newberry Municipal Building Tuesday. Newberry was the fourth of five stops on HIAF’s statewide road tour.

The event featured presentations from HIAF and the Florida Department of Agriculture and Consumer Services to educate Newberry farmers about the opportunities in growing industrial hemp.

“The industrial hemp industry is still relatively young, but it’s interesting to be in at the ground level and watch a fledgling industry grow,” said Newberry City Commissioner Matt Hersom. “If we got the opportunity to be part of that in Newberry, we’d be excited about it.”

Hemp is often associated with its cousin, marijuana. Ruth Borger, the assistant vice president of communications for the University of Florida’s Institute of Food and Agricultural Sciences, said that both plants are the same plant species, cannabis sativa, but they differ based on their tetrahydrocannabinol content. THC is the main psychoactive component in the plant. While marijuana contains greater than 0.3% THC, Hemp contains no more than 0.3% THC.

In other words, marijuana creates a high and hemp does not.

Borger also said that certain environmental stressors can alter a plant’s THC levels, but part of UF/IFAS’s research is finding steps farmers can take to prevent their crops’ THC levels from exceeding the acceptable amount.

“It could be that you thought you were growing industrial hemp, but because there was a drought or something, it could generate a higher THC level, and now you’re growing marijuana,” Borger said. “How much water, what kind of fertilizer, how much heat can it sustain—that’s what we’re trying to determine.”

The value of the CBD industry is predicted to reach about $5 billion by the end of the year, according to the Brightfield Group website, a leading market research firm for the legal CBD and cannabis industries.

Forecasts are already surfacing about the industry’s potential worth in the next decade, but what’s certain is that CBD products are popping up on gas station and supermarket shelves for the primary purpose of soothing common health issues, like anxiety and muscle pain.

The 2018 Agricultural Improvement Act was the catalyst for the sudden interest in hemp farming and research. The federal legislation removed hemp from Schedule I controlled substances and instead classified it as a regular agricultural commodity crop. This change opened up previously untapped opportunities in industrial hemp farming.

UF/IFAS and Florida A&M University are involved in ongoing research on which hemp plant varieties perform best in Florida’s climate. Researchers are still at work, so many of the questions asked by farmers at the event couldn’t be answered.

Some farmers attending the workshop, for instance, voiced concerns about hemp seeds’ germination and feminization rates. As HIAF Executive Director Raymond Mazzie explained, germination is the rate at which plants sprout. Feminization is the ratio of plants that are female, as opposed to male. Female plants are more desirable for farmers because they produce buds that contain CBD in commercially valuable quantities.

High germination and feminization rates are important because if only half a farmer’s seeds germinate and only half of those are feminized, the farmer essentially receives only a quarter of the product he or she paid for.

Mazzie isn’t worried, though. In his view, the risk is worth the reward.

“Wherever we don’t know something, therein lies the opportunity. Wherever there’s an obstacle, therein lies an opportunity,” Mazzie said. “Here we are with a lot of unknowns, and the first people to figure that out are going to be the ones who make the most money and take advantage of this new, booming market.”

“The yields per acre for hemp right now are far superior to any of the other crops these individuals (Florida farmers) are growing,” Hasenauer said. “The financial reward is substantial if you can get it right.”

Andrew Strickland, a cattle farmer from Bradford County and one of more than 100 event attendees, is interested in hemp for that very reason. In fact, he sees so much potential in growing industrial hemp that he also attended the road tour event in Jasper last month.

“I think this plant is the most unique plant out there right now,” Strickland said. “There’s money in it.”

The first step for farmers is to obtain a permit to grow hemp from the Florida Department of Agriculture and Consumer Services. Dick Crockett, the department’s director of external affairs, said that while permits are not currently available, they should be in October or November.

The Florida Department of Agriculture and Consumer Services is still in the rule-making process for hemp farming, but Crockett said that the process will require a successful background check, a $50 finger print fee and a property inspection of the growing space. The permit will require farmers to obtain certified seed to grow the plant.

At harvest, farmers will send a sample of their crop to a Florida Department of Agriculture and Consumer Services-approved lab to be tested for THC levels. Crops containing more than 0.3% THC will have to be destroyed.

Beyond obtaining a permit once they become available, Mazzie recommends farmers be on the lookout for new research on hemp cultivation and reach out to politicians who have a say in industrial hemp regulation in Florida.

“I’m only as loud as the constituents we advocate for. If we don’t have a large group of people who care about this issue, then I’m the Boy Who Cried Wolf,” Mazzie said. “What this (event) did is it affirmed that there’s interest here.”

The next stop on the road tour is at the DoubleTree by Hilton in Tallahassee located at 101 S Adams St. on Thursday.