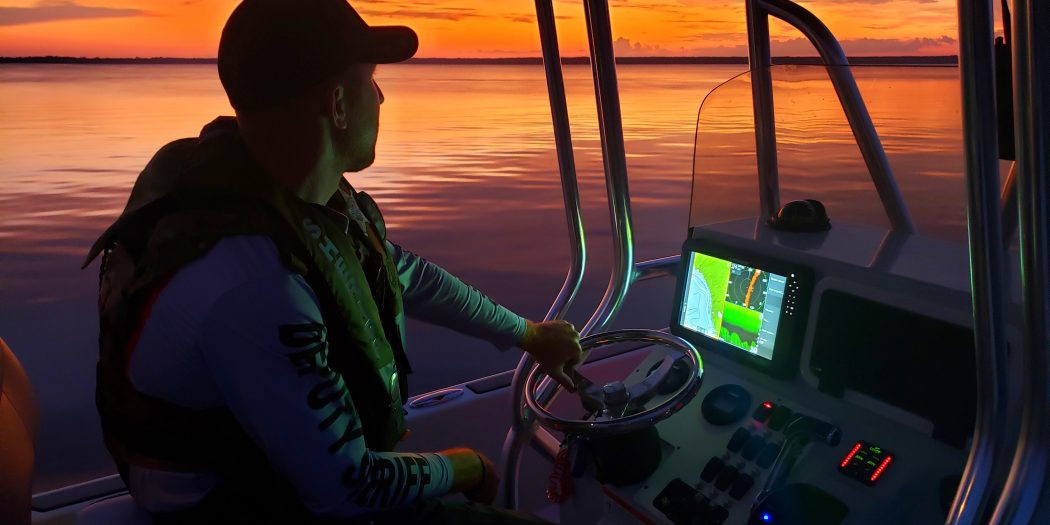 A deputy assigned to the Alachua County Sheriff’s Office Marine Operations/Underwater Recovery team patrols Lake Lochloosa earlier this summer for airboats on the lake after the 7 p.m. curfew. In the curfew ordinance’s 10-year history, only three tickets were written. Deputies wrote all three in August after county commissioners allocated an extra $20,000 for increased patrols. (Courtesy of the Alachua County Sheriff’s Office)

Property owners along Alachua County’s lakes hear a variety of sounds through the day and night: Endless songs of birds, perhaps a splash of water as a fish leaps from the mere and certainly the nighttime cicadas.

But in Evinston, an unincorporated community between Alachua and Marion counties, Bill Halback said there is one noise that stands out from the lake’s natural bustle.

“Nothing in nature is comparable to an airboat,” Halback said. “It’s like one of the (funny cars) on the drag strip being out there on the lake with you.”

Airboats don’t pass Halback’s property in a constant stream, but when they do, they make their presence known.

They rattle the windows and shake plates. Conversations over the phone or in-person are often halted until they pass and watching television or listening to the radio becomes impossible until they’ve left the area.

“It’s kind of like cigarette smoke,” Halback said. “The person doing the smoking is getting all of the fun and benefit, and anyone else in range is holding their nose.”

Airboating on lakes in Alachua County is freely permitted during the day, but a county ordinance prohibits it from 7 p.m to 7 a.m. The ordinance was created through popular vote from Alachua County residents, and it has been in effect since 2009. Recent additions to the ordinance, however, put an extra $20,000 in the Parks and Conservation budget to help enforce the curfew.

Two deputies can now patrol in a sheriff’s office boat, with one deputy in a vehicle onshore.

Jody Branaman, the unit commander of the Alachua County Sherriff’s Office Marine Operations and Underwater Recovery team, said the money helps enforcement of the ordinance, which applies to all county lakes and waterways.

“It’s been an ongoing issue for years,” Branaman said. “It is much cleaner, precise and enforceable now.”

The team wrote three tickets in August — the only three tickets written since the ordinance’s inception. Airboating after the curfew nets a $250 fine, and second offenders receive a $500 fine and a mandatory court appearance, though Branaman said that no one has yet been caught twice.

With the recent tickets have come backlash from some in Alachua County. A change.org petition, titled “Withdraw The Discriminatory Curfew Against Airboaters In Alachua County Florida,” has received some 6,000 signatures. It argues that the curfew limits alligator hunting during the season (Aug. 15 to Nov. 1) and hurts families that rely on airboat related activities for income.

“Now airboaters say they want to compromise,” Halback said of the protests. “They want something different than what the curfew is. But I think it’s a pretty fair compromise.”

Despite the protests, however, the county is still doubling down on efforts to enforce the noise ordinance. The deputies on the lake currently use a 24-foot Ranger Bay boat, but the sheriff’s office expects to acquire an airboat to aid with patrolling within the next fiscal year.

As long as citations are getting written, Halback wouldn’t mind the extra noise that a patrolling airboat could cause.

“I’d gladly trade that any time for what we’ve been enduring,” Halback said. “I’d clap my hands and say, ‘Thank you for being here, make all the noise you want.’”

Branaman acknowledged that airboats can reach places where regular boats cannot and are useful for hunting during times such as alligator season.

“Airboats are incredibly useful vessels,” Branaman said. “But there is a time and a place where they are authorized to be operated, and for those folks that want to operate them outside of the county ordinance, there are substantial penalties.”

River is a reporter for WUFT News who can be reached by calling 352-392-6397 or emailing news@wuft.org.
Previous Sep. 18, 2019: Afternoon News In 90
Next Emotions Run High At City Meeting About Changing Gainesville’s Inequity