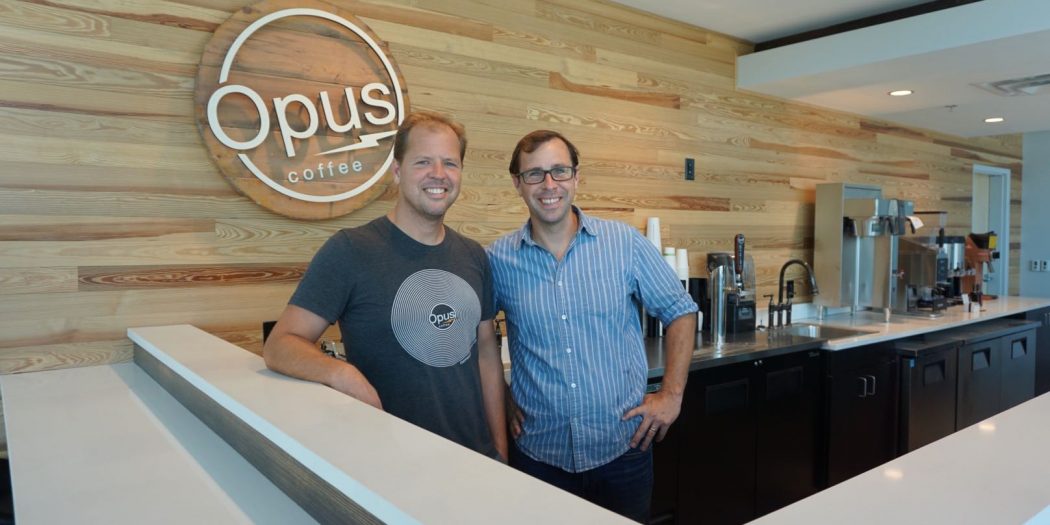 Sneakers slapping on the ground, heart pumping, a doctor reaches her arm out to check the time on her watch.

Just a few minutes to grab a quick cup of coffee downstairs at Opus before the next round of surgeries. She orders her coffee, and the baristas move around each other, pouring drinks and calling out orders.

By 12:07 pm, the doctor has gotten her cup of joe and is chugging it down on her way back to work.

That scenario was what Tim and Brett Larson dreamed up when they first opened Opus Coffee. They wanted to provide quality coffee to the people who save lives. Now, 17 years later, the brothers have a new caffeine dream.

Two new Opus Coffee locations are opening this fall. The first launch is on Sept. 29 at an Innovation Square location, 800 SW 2nd Ave. The Larson brothers envision this new space to be a place where students come to study and hang out. With 50 seats in a spacious area, it has promise.

The new location will also have beer and wine available to those of age.

“We want to grab people who are leaving work and want to grab a beer, but don’t want to go to a bar to do it,” Tim Larson said.

The establishment will be open from 7 a.m. to 8 p.m., though they said those hours may change based on demand. When asked what drew them to the space, they gushed over the floor to ceiling windows, positive relationship with the landlord and the location itself.

With this new location comes a slower change of pace. The brothers created a new specialty drinks menu dedicated to their prized possession: the Slayer espresso machine. Its creations feature names like “Slay Like Bey” (made of nitro coffee, lemonade, pineapple and cherry in honor of Beyonce and her album “Lemonade”) and Dragon Slayer, a mocha latte with a fired marshmallow. They light that one afire in front of you.

“We can’t exactly light a marshmallow on fire in a hospital,” Tim Larson said. “I think it would freak people out.”

Aside from their Innovation Square location, the brothers are also planning a second Opus launch in October. It will be located in the same plaza as their headquarters in the 4th Ave Food Park.

“The second off-campus location is going to be like nothing you’ve ever seen before,” Brett Larson said. “It’s definitely a coffee experience.”

Though there’s a lot in the works for Opus Coffee, other local business owners generally seem excited about their neighbor’s progress.

“We need a coffee shop there,” she said, “and people have been waiting and waiting a very long time for this.”

BakerBaker is the supplier for all the pastries and baked goods at Opus Coffee, as well as Pascal’s Coffeehouse.

Despite their eastward growth, the Larson brothers don’t intend to abandon their hospital locations.