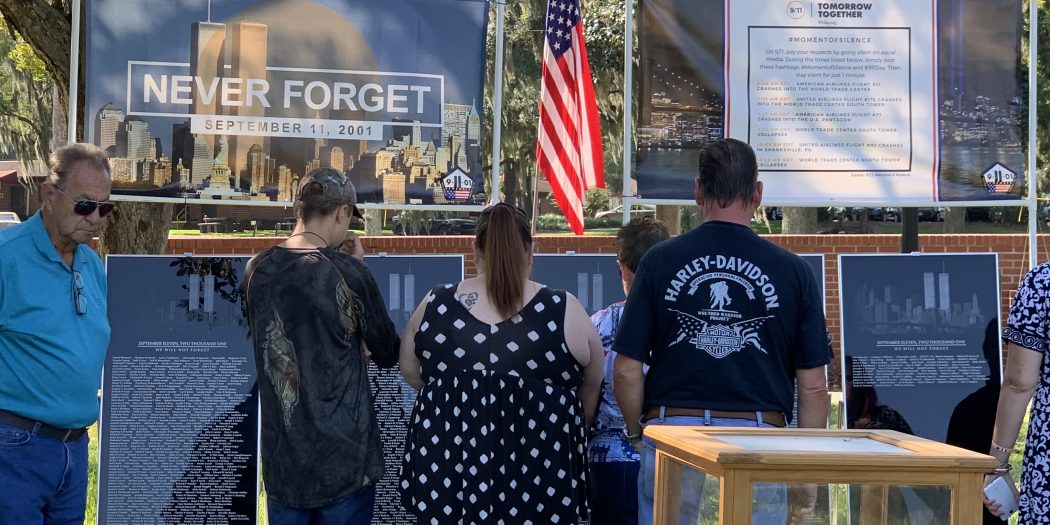 Sandra Andrews and members of her family pay their respects Wednesday to the fallen victims listed on the memorial wall, including her cousin Lisa Terry. (Alexa Spicer/WUFT News)

Traveling Memorial Wall In Ocala Honors Those Lost On 9/11

Sandra Andrews thought her cousin was in Hawaii – and not inside the World Trade Center – when the planes hit on Sept. 11, 2001. That was until her mom said Lisa Terry was in New York.

Terry, 42, was a vice president at Marsh and McLennan’s Michigan office, and her work took her to the global services firm’s company headquarters in the Big Apple on that fateful day.

It was a long time before her family accepted that Terry had died in the tragedy, Andrews said, as she, her mom Helene and her sons, James 14, and Riley, 10, attended a 9/11 memorial program Wednesday at Ocala-Marion County Veterans Memorial Park.

“The final acceptance came when the Red Cross showed up with jewelry – melted jewelry,” said Andrews, a Michigan native who now lives in Orange Springs and works as a substitute teacher with the county school district. “And that’s all we have.”

Hundreds of people gathered at the park to honor those lost on 9/11. A traveling memorial wall was to be on display at the park through the weekend. It’s the first time the 32-panel wall has come to the county, said Suzanne McGuire, legislative assistant to Sen. Keith Perry.

“These attacks on our great nation were horrific and have forever changed our country, and although we are different, we are not defeated,” Marion County Commission Chairwoman Michelle Stone told the crowd.

Daniel Pope has been with Ocala Fire Rescue for 22 years, but the driver engineer had only been with it for four years on 9/11. He remembers Sept. 12, 2001, as also being particularly hard.

The rescue station that was normally bursting with uncontainable energy felt somber. Pope said he felt different while putting on his uniform that next day. He also vividly remembers the many U.S. flags strewn across town right after the disaster. It struck him that just like the fire department, America was focused on forgetting its differences and standing united.

As for any debate about the global war on terror, Pope said 9/11 is a day for everyone to remember that we’re all in this together.

“We’ll argue, we’ll disagree, and we’ll agree to disagree, but I love you,” Pope said.

Having it close by not only brings awareness to children who were not yet born in 2001, but shows the support between first responders and those in the military, McGuire said.

Several other 9/11 events were slated in the county through Sunday. A patriotic concert by the Christian Church of Marion County choir was scheduled Wednesday night. A live tribute by first responders from 9/11 is set for on Thursday night. Three first responder survivors were scheduled to share their stories Friday evening, along with a woman who was on the phone with her husband when he perished in the second tower collapse, McGuire said.

A prayer service was set for at 9 a.m. Sunday. The memorial wall viewing will end at 4 that day.

McGuire said the wall and others like it reflects the nation’s strength and resilience.

“You get knocked down, you start over,” she said. “As a country, that’s what we did.”